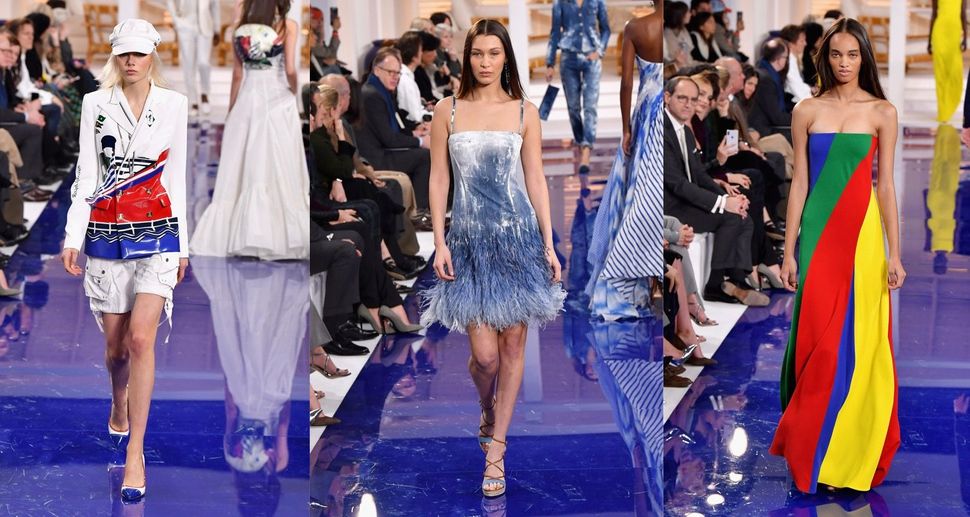 The strength of Ralph Lauren is his ability to stick to a preppy sensibility, no matter how much the zeitgeist of fashion change. Sometimes, that dedication can be a bit stale, creating repetitive collections that say and do nothing. But sometimes, he manages to strike a chord, to make something fresh, reminding everyone why his work is so important and relevant, even after 50 years in this business.

Take his see-now-buy-now Spring collection — it was a nautical inspired collection, a theme Lauren returns to frequently, especially because it’s a core philosophy of the prep acolyte (think yacht-sized sailboats off the shore of Nantucket). And so, male and female models wore red-white-and-blue one-piece swimsuits, crisp, tailored white bermuda shorts, and glossy parkas in graphic prints.

But spring trends managed to sneak its way into the collection, nonetheless. Like the acid-wash denim sundress, with a cascade of feather fringe at the skirt: it hit two of spring’s big trends (90s spaghetti straps and feather trim), without falling into the trap of looking too unwearable or trendy. The denim gives it a rugged, Americana vibe that somehow seems to jive perfectly with the glamour of the feathered skirt. The result? A covetable, on-trend dress that oozes Ralph Lauren.

This is the kind of collection a pearl-necklace-clad, old-moneyed vacationer would wear to let loose (but not too loose, as evidenced by the sharp, ironed lines of Lauren’s double-breasted blazers) to summer on the beaches of Jamaica (where Lauren owns an estate). Specifically, what they would wear off the coast of Jamaica, lounging on board a 200 foot yacht.

As the collection progressed, the yachting imagery became literal, adorning turtleneck sweaters, bathing shorts and a particularly amazing leather blazer — the angular lines of the red ship print forming the perfect contrast to the stark white jacket’s slim fit and squared off shoulders. But then it morphed, becoming an abstraction, the bold stripes in primary colors on the yacht’s hull becoming graphic blocks of Crayola colors, such as a black puffer with lapels and pockets in vivid red, yellow and green. Finally, the graphic blocks unfurled, stretching into bold stripes, asymmetric stripe that curved around the body on a strapless gown in a minimalist silhouette.

As New York Fashion Week progresses, it seems that designers are taking two distinct approaches to the political and social unrest that plagues this country: Either they are doggedly facing it, using their shows and their clothes to protest everything they think is wrong with this country, or they are studiously ignoring it, using the drama of bold, sartorial statements as a means of escapism. Lauren is solidly on the side of the latter, transporting guests to a glamorous world, one covetable outfit at a time.