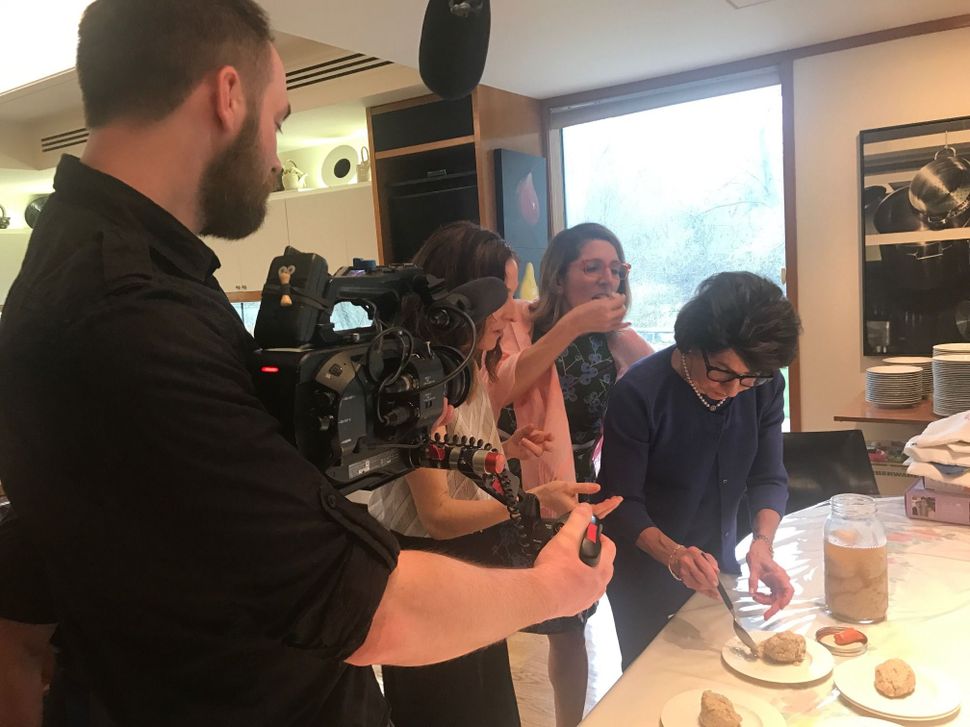 When is a fish not a fish?

When it’s the emotionally charged cultural totem at the center of Gefilte, a short documentary that debuts online this week.

Compressing both family and food history into 12 minutes, the film tracks the months-long preparation of gefilte fish for a massive seder hosted by the Hermelin family of suburban Detroit.

But director Rachel Fleit’s elegant, elegiac short unfolds into much more, as questions of Jewish identity, survival, and continuity float to the surface — along with some not-so-serious issues about the taste, smell, and texture of gefilte fish.

“When we were making the film, our joke was the tagline would be, ‘Gefilte: It’s Not About the Fish,” laughed Fleit, a Brooklyn-based filmmaker. “It’s really about love and loss in every bite of that Ashkenazi food. It’s my parents, their parents, and everyone who came before them. And on another level, it’s about a gazillion Jews, for thousdands of years, who persisted in keeping tradition alive, and keeping Judaism alive, no matter what kind of oppression faced them.”

A chance conversation led Fleit to the fish story. The filmmaker met Francine Hermelin, daughter of Gefilte protagonist Doreen Hermelin, at a 2017 screening for another documentary. “Francine said, ‘You know my mom may be selling her house, and this could be the last year my family makes this epic seder. She makes 200 pieces of gefilte fish each year from scratch’. I knew instantly I needed to film it”

Fleit hopped a flight to Detroit and filmed the making of the fish a month before Passover, returned for the seder with a full crew. A third trip to Detroit involved scouring through archival family footage. Editing the film took almost a year. “But with the help of an unbelievable team we had a film for Pesach!” Fleit said. Both Fleit and Francine Hermelin are members of Reboot, the Jewish networking organization and cultural “catalyst” founded in 2002. Reboot helped produce the film, Fleit said.

Did the film capture the Hermelin family’s experience? “Absolutely,” Francine Hermelin said. “We knew all along it isn’t actually about the fish. It is about those things that bind us – love and meaning and family. The fish is a ritual that does what rituals do. It makes meaning out of the minutes, suspends time and threads one generation to the next.”

Doreen Hermelin mother deserves her starring role, Francine said. “The role my mom plays making the food serves up so much more than food. She threads the needle of past generations to the present and future. Much like the symbolic foods on the seder plate, our gefilte fish has a story both particular to us and universal to others.” Hermelin’s mother didn’t sell her house after all; seder 2018 took place in the same home.

The response to the film, now streaming on the Nowness platform, has been “amazing”, Fleit said. “People are so moved. When you’re in an edit over a year, become desensitized to the material. We set out to make a beautiful fiolm about an ugly fish. But it grew into something much larger.”

And for the record, Doreen Hermelin’s gefilte fish deserves its legendary status, according to Fleit. “Oh, my God. It was incredible,” she enthused. “I’m a huge gefilte fish fan, but I’ve been eating it out of jars my whole life. Hers was amazing.”