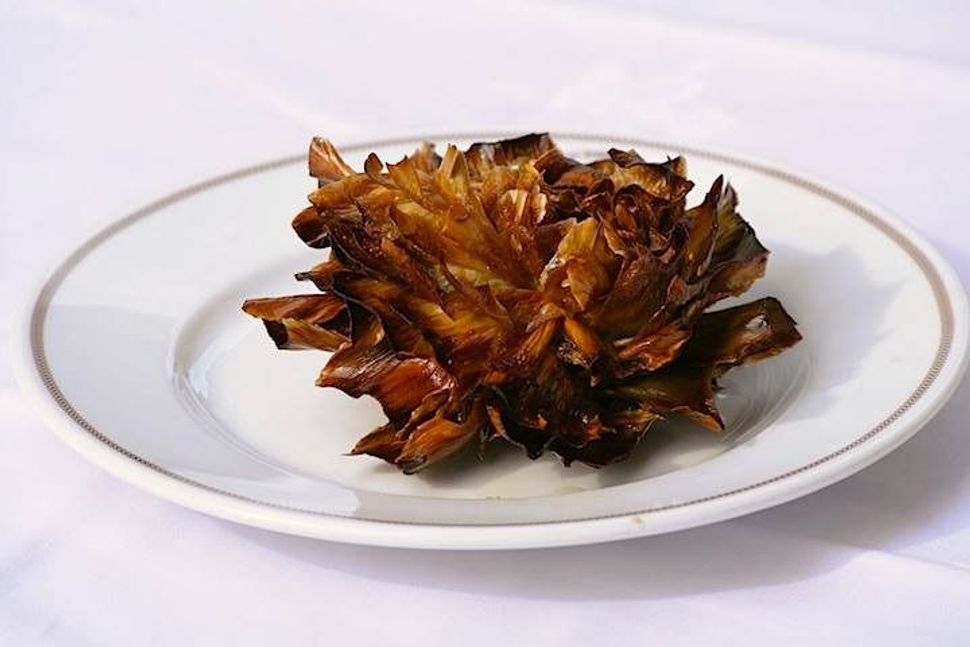 ‘Carciofi alla guidia’ literally means Jewish-style artichokes. Originating in the Jewish Roman ghettos, carciofi alla guidia is a deep fried artichoke spread open like a sunflower, eaten hot from the fryer. Best made from the Romanesco variation of the artichoke, harvested between February and April, it is one of the Eternal City’s more famous dishes. And between the nutty folds of the artichoke leaves (traditionally a poor man’s food) lies the millennia-old heritage of Roman Jewry.

But not for long, if the Israeli Rabbinate has its way.

Haaretz reported that Israel’s Chief Rabbinate has banned a ready-made version of the dish because insects and worms may reside in the leafy nooks and crannies of the artichoke. Considering this is a recipe that dates back to the 16th century, Israeli rabbis certainly are proving quick to toss it out the window. The Jewish community in Milan reportedly asked a kosher restaurant to alter the recipe or remove the dish from the menu.

“The heart of the artichoke is full of worms, there’s no way you can clean it,” said Yitzhak Arazi, the Rabbinate’s Import Division head, told Haaretz. “It can’t be kosher. It’s not our politics, this is Jewish religious law.”

Roman Jews countered by pointing out that Israeli artichokes were very different from their Italian cousins. “We’ve been eating this dish prepared this way for 600 years,” Umberto Pavoncello, the manager at kosher eatery Nonna Betta, told the Local. “I’m a little worried about the souls of all the people that have been eating them over the centuries, I hope nothing bad happens to them.”

The rebels among us might be wondering how to make this iconic dish:

Start by cleaning the artichokes with a sharp knife. All the hard leaves should be removed in quick circular movements. Beat them together to open them. Leave in lemon juice infused water. Season with salt and pepper. Deep fry in olive oil. Cold water should be sprinkled upon them to keep them crisp before serving.

Will this native dish of Roman Jewry be eclipsed by the desire to impose greater stringencies on the world of kosher food? Will Roman Jews prevail here, as they have for hundreds of years, creating culinary delights with what little materials they had? Has the Jewish fidelity to the deep fryer finally given out?

Wherefore will our Carciofi alla guidia be in a year’s time?

Shira Feder is a writer for the Forward. You can reach her at [email protected] She wants to hear your thoughts on Roman Jewish dishes.