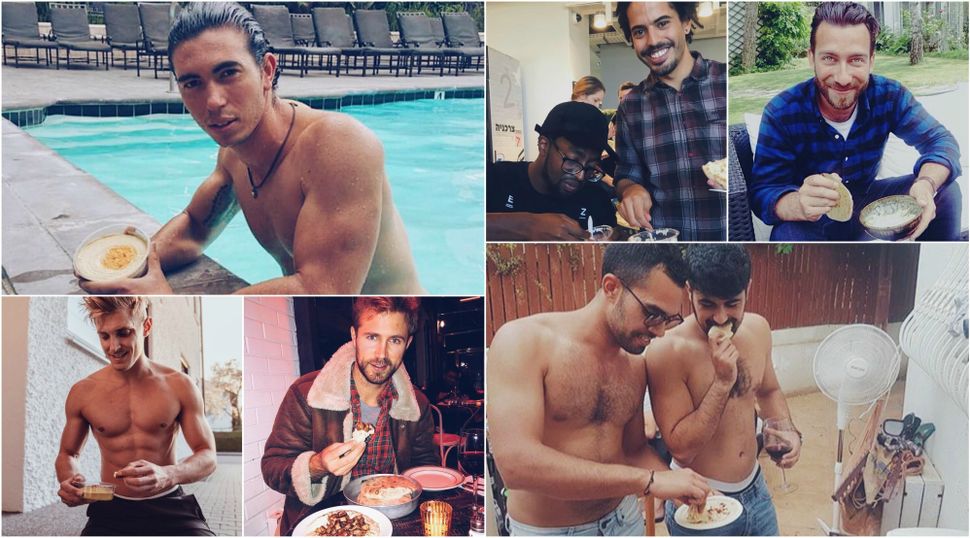 Image by Hot Dudes and Hummus/Instagram

The beloved Instagram account Hot Dudes And Hummus is an Internet icon, an often radical depiction of the female or non-straight gaze as it reflects desire and most importantly just a catalog of really hot guys going to town on some hummus.

When you get home from a long day at work, and bae is looking like a straight up snack ???‍♀️✨ #hotdudesandhummus • • • @nielshorvath

As I approached May 13, otherwise known as International Hummus Day, I meditated over the best way to celebrate, commemorate and contemplate what hummus has done for humanity. All roads seemed to lead back to one place, and one place alone: the @hotdudesandhummus Instagram account. With 42.7 thousand followers, all enjoying the sight of chiseled, pixelated abs in relation to a bowl of mashed chickpeas, a cultural phenomenon was clearly taking place. What drew hot dudes and hummus together? What secret relationship did hot dudes have with hummus? What made it the standard snack for men who looked like snacks?

Only the creators of the account had the answers.

Wishing everyone a steamy weekend with a hottie and some hummus ?

The account has some surprisingly lofty goals. It’s geared towards “international women, the LGBTQ community (and heterosexual men with a great sense of humor),” Orly, one of the creators, tells me. Its goal is nothing less than positive branding for Israel as a country and as a people, which it does by engaging with non-Jewish and non-Israeli audiences with humorous and attractive content.

Here are my findings from this completely scientific investigation into the correlation between good looking gentlemen and the Mediterranean dip:

Who is behind the account? Tell me what inspired you to start documenting the presence of hot guys eating hummus.

Creators of HDAH: Hot Dudes and Hummus was created by two Israelis and an American (Betty, Orly and Israel), who at the time were students. We wanted to create an apolitical branding campaign for Israel to shed some light on the humor, diversity, fun, beauty, and culture that are so vibrant and rich in this country. We wanted to highlight a positive aspect of the country, away from the conflict – something which unfortunately is not done enough, whether in media coverage, or other aspects of the private sphere.

After some days of brainstorming and taking individual time to gain inspiration, we realized that we had been following some great social media accounts. We were inspired by massively successful campaigns such as Hot Dudes Reading and Hot Dudes With Dogs (although there are many more such as Hot Dudes and Cats, Hot Dudes and Buns, etc.), both of which have over 300k followers. We thought we could appeal to a wide audience by following a trend, yet creating a competitive advantage that captures some of the magic of Israel. Hence the creation of Hot Dudes and Hummus -Israel’s Yummiest.

You generally won’t find an Israeli who doesn’t love hummus. It’s one of the best delicacies of the Middle East, and of Israel in particular, besides for hot dudes of course, so we thought, why not put the two together?!

When did you first notice a correlation between attractive men and hummus?

The correlation isn’t hard to find. They are the two best things that Israel has to offer in our books.

Suns out, abs out! The weekend is finally upon us ??? • • • @lionheart_s #hotdudesandhummus

Flashback to the first time you tried hummus. How did it change your life?

Orly: The first time I tried hummus, life was not the same. It became a staple, and from that point on, became part of almost every meal. For me, Hummus has its own food pyramid. Why not have hummus for breakfast, lunch, and dinner??

Betty: Don’t remember the first time I had Hummus, it was probably in my baby bottle.

How many hot hummus submissions do you get a month?

We get numerous submissions a month! It’s really great to know that our followers are engaged with our content, and want to be involved. We love interacting with them and both being a part of the process. However it’s not the submissions that really make the difference – it’s the incredible feedback and comments we get.

We get comments in dozens of languages, including English, Hebrew, French, Arabic, Portuguese, Dutch and more. We have people tagging each other, commenting about wanting to visit Israel, wanting to date Israeli men, or having visited and missing Israel. Sometimes the comments have nothing to do with Israel and are just full of admiration for whatever we posted – and when a picture has thousands of likes, and hundreds of positive comments, we know that we reached at least one person with our message: Israel is a beautiful country with beautiful people, inside and out.

6. What’s the hottest food a hot dude can eat with hummus to maximize his hotness?

Blue skies and a hottie with hummus ? Monday’s lookin pretty good to me ?? • • • @gentlemanlanding