Josh’s Deli Is The Most Non-Kosher Jewish Deli Ever 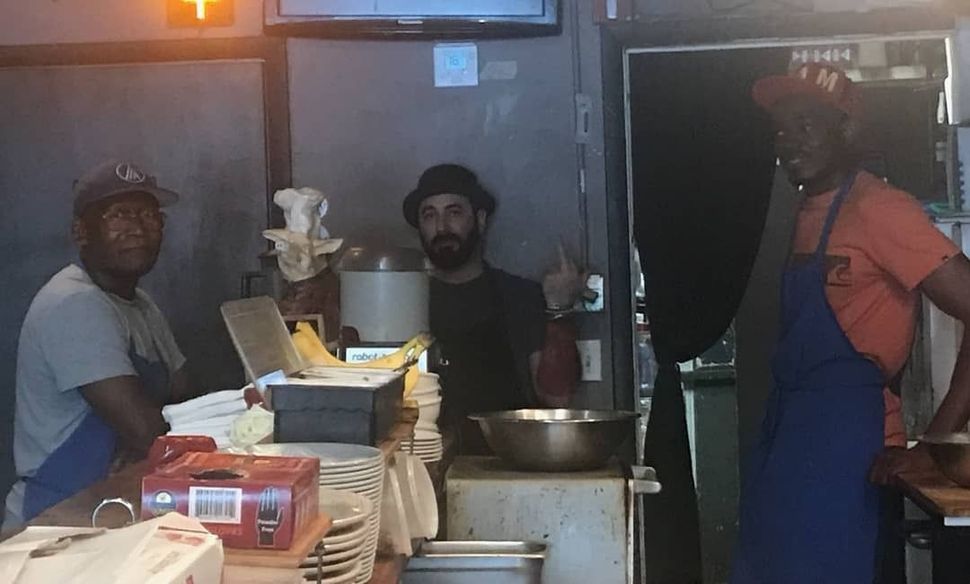 The man behind the meals. Image by Josh's Deli/Instagram

Happy holidays from my lil fam to yours. #fakedelicheer #butforrealhappiness

Josh’s Deli, run by Josh Marcus, offers a spin on traditional Jewish deli food. It’s located in the Orthodox area of Surfside, Miami, surrounded by Jews who don’t mix milk and meat (so no Reuben’s) and don’t eat shellfish (so no lobster Jewchachos, as he calls his signature dish).

Is Marcus seeking to offend? Or does Marcus, a man who is not afraid to get aggressively political from the Twitter page of Josh’s Deli — even at the cost of losing customers — have a bigger, more creative plan in mind?

I spoke to the owner of Josh’s Deli and the creator of the Jewban sandwiches, which are garnering their fair share of media attention, to find out.

Shira Feder: What’s it like to serve aggressively non-kosher food in Miami’s most Jewish neighborhood? Do you think there’s some chutzpah to that?

Josh Marcus: There’s definitely some chutzpah, like we just had a guy in here maybe an hour ago who was trying to convince me to become kosher because that’s what should be happening in Surfside. He talked for fifteen minutes. It’s not what interests me about cooking. I enjoy what I do. I enjoy the ability to improv off of something. Being in this community allows me to get the ability to improv off a pre-set script, if you will. If I was anywhere else, it might not be as inspirational to piss people off.

So did you set out to offend?

No, not at all. We originally tried to become kosher. I owned another restaurant that was non-kosher at the time, and even though I met with all the rabbis and I swore up and down that all I wanted to do was have my little kosher deli up in Surfside and serve the community, they didn’t allow me to do it. As far as I’m concerned, me not being kosher is on them, not on me.

Who is the demographic of people who eat in your restaurant? You’ve got latkes and matzo ball soup on your menu, but you’ve also got Reuben sandwiches and octopus elotes.

It’s changed a lot, because I’ve been on TV a couple times, we’re getting some national exposure. Food Network just called us the best deli in Florida…so I get people from all over the world. We just had someone from South Korea this morning and had a salted Jewban for breakfast, at 8:40 this morning.

You have the Jewban (sandwich with pastrami, swiss cheese, pickles and pork.) You have the lobster Jewchachos. What inspires these provocative dishes?

The skeleton I use is I always try to incorporate deli food or traditional Jewish food into a dish and progress it further. So the Jewchachos started with me playing with cholent, an Eastern European dish that most Jews on Friday would gather a bunch of meat in a pot and cook it overnight on Friday so it would be ready as a hot meal for when they got out of shul on Saturday. Then it became huevros hewbreros, where i poached the eggs in cholent. I played with huevros rancheros, the Mexican dish, it went from the chili cholent dish to a layered tortilla dish with mole and avocado and pastrami spiced duck prosciutto, I think it was.

You had a dream of being Miami’s Russ and Daughters. Then you couldn’t get the kashrut certification so you went another direction. Are you glad your deli didn’t end being kosher certified, so you could play with these different dishes?

WHat the food is and what I serve is completely secondary to my enjoyment of doing it. And everything else, all that secondary stuff, whether it’s kosher or non-kosher, breakfast food, sandwiches, or if we’re serving just hot dogs, it’s all about being happy. Most of my customers can completely empathize with the experience of eating here. I don’t think they ever think about it being kosher or non-kosher.

If I didn’t enjoy what I do, I wouldn’t be doing this. The jokes I make with food all come from that enjoyment, and the idea that I want to share my enjoyment of life.

One thing I noticed about Josh’s Deli’s social media presence is you’re not afraid to get political. On Twitter I see Josh’s Deli talking about McConnell being the most evil man ever, about Rex Tillerson, on Instagram you use the hashtag #fakedeliproblems a lot…Do you think there’s something specifically political about food? Or is it that politics has seeped into every aspect of the average American’s daily lives, until you have no choice but to talk about it?

I wish I didn’t have to talk about it. I’ve only really started becoming really political in the last two of them. I could really lose customers based on the fact that my political views lean a certain way but I think it’s important right now. I believe we’re at an interesting tipping point. I definitely want my voice to be known on the side that I believe is the right one. I won’t back away from those points of view.

But I believe the points of view of any person is important. I try not to prejudge someone. And because I’m in the position I’m in, I have conversations with many people with different points of view every day. I’ll try to turn everything into a joke anyway, so…

So both your arms are tattooed, saying ‘God can wait.’ What does that mean for you?

I don’t look at the tattoos as any part of my religion. I look at it as independence, moments in my life I want to remember…my mind and my body is a continual story that doesn’t stop until I’m dead, so I’m going to keep telling that story.

You’re the most non-kosher Jewish deli. What is your feeling towards traditional Judaism, which you’re surrounded by in Surfside, who would shy away from eating one of your Reuben sandwiches, for example?

I have tremendous respect for everyone’s religion. I don’t try to piss people off. I’m using my inspiration of Jewish food to progress my cuisine. All I’m trying to do is prepare good food with a backbone of what I find interesting and funny.

Most Jewish food is meaningful. Bitter herbs for Passover, fried items because of the Festival of Light for Hanukkah, New Year’s you have sweetness for a sweet year. Jewish food is more symbolic than any other cuisine I can think of. If Jewish cuisine is telling a story through food, why not push it further? Just because I’m not religious, per se, doesn’t mean I shy away from telling stories with food, or my story with food.

Shira Feder is a writer. She’s at @shirafeder and feder@forward.com

Josh’s Deli Is The Most Non-Kosher Jewish Deli Ever