Why Sabich Is The New Falafel 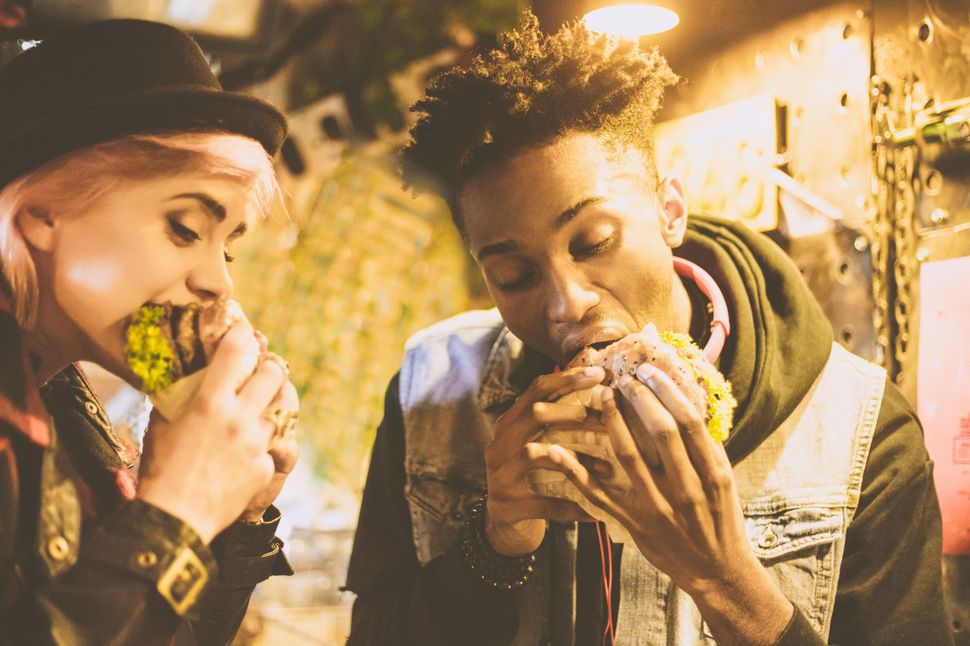 The title of a new essay collection telegraphs you’re in for a bumpy ride. And Unholy Land: An Unconventional Guide to Israel (Repeater Books) delivers, with punchy, unfiltered writing from young Israeli scribes like actor Rana Werbin, novelist Reuven Miran, and social critic David Sorotzkin. On the menu: Sex, drugs, and – since this is Israel – politics instead of rock ‘n’ roll.

Ithamar Handelman-Smith, the book’s Israeli-born, Paris-based editor, told the Forward he hopes to give readers a bit of a jolt if they think they know his homeland.

“In this volume of essays, short stories, poems and images, I was trying to capture some of the different human aspects, unexplored and often overlooked, of the Israeli-Palestinian story: the story of a torn country that has more hidden depths to it than meets the eye,” he said. “I believe that these texts can truly introduce the reader to the unknown land of Israel, with all its ancient complexities and contemporary surprises beneath the turmoiled surface.”

By sharing a sometimes-unsavory side of Israel, Handelman-Smith said he also hopes to bring readers closer to Israel, rather than the opposite. “On a personal level I hope the reader will learn and be inspired to explore something new about this wild, rather troublesome, but always exciting place,” he said.

With that in mind, the Forward’s presenting an excerpt from Unholy Land that deals with a subject of endless fascination and debate: Food. In “Sabich”, cultural critic Ron Levy Arie traces the rise of the ubiquitous Sabich sandwich from its origins in Iraqi Jewish kitchens to its dominance as a street-food staple. Between the lines, it’s a meditation on cultural appropriation – and conflict.

What started out originally as a Saturday morning breakfast food of Iraqi Jews has become a sort of a national Israeli street food that has even cast a shadow over the well-known and much-loved falafel. The urban legend of the dish starts in the sleepy suburb of Ramat Gan back in 1961. A newcomer from Iraq opens up a small food stand in a neighbourhood by the name of Nahalat Yitzhak. The young man sells a simple sandwich he knows from back home. The ingredients are basic, yet compose a perfect combination for the mouths of No. 63 bus drivers on their way to their daily route. The clients used to call the owner by his first name, Sabich. They used to call at him, and say: “Make me a dish, Sabich!” (No “please” included, typical Israeli style.) Therefore the name of the dish was born. Others disapprove of this version, and claim that the dish had been familiar amongst Iraqis by that name because the word sounds similar to the Arab word “sabach”, meaning “morning”, and since it is a breakfast delight, it would make sense for this to be the true reason for the name. In Israel, even street food brings conflict.

The sandwich is made in pitta bread, includes slices of deep-fried aubergine, hard-boiled brown egg, tahini sauce, shredded onions and parsley, some finely chopped salad, homemade hot sauce and the secret ingredient, amba – a word in Arabic that originated from Sanskrit, meaning mango. This unique product made its way to Iraq due to the work of spice traders from India, who brought pickled mangoes to the Iraqis. They then mixed and diluted them with water and oil, and this sauce merged into Iraqi cuisine. It carries a strong fenugreek and allspice aroma that comes from an Iraqi spice blend known as baharat, which is also mixed into that special shining-yellow sauce. Some folks avoid including it in the sandwich due to the fact that the smell lingers with you throughout the day, and you can even smell it when you sweat. Yet it is still worth taking that risk. Right until the late Nineties and early Noughties, falafel was the undisputed national street food. Usually Israel tends to “borrow” food invented by Arab countries and call it her own. From the Fifties onwards, falafel was the ultimate street food favourite, made by local Palestinians or by Jews coming from Egypt, Yemen or Syria. It was cheap and accessible and is made by the most lovable pea in the Middle East, the chickpea. The other key ingredient is hummus, which by itself stands as the ultimate dish of the Middle East.

Then the sabich started shining. The guy who popularized it the most is called Oved, and comes from the neighbouring town of Ramat Gan, Givatayim. Oved claims to make the best sabich dish in the universe, and even invented a sabich- based slang and a theatrical way of preparing the dish, in which he addresses the customer in the manner of an enthusiastic football announcer and questions them about their desired amount of toppings in a dialect that derives from the football fields. He created the craze, and after Israelis had been through the “Oved experience” – which also includes a diy Hall of Fame of record-breakers in sabich- eating – others soon started opening sabich shops, such as the famous Sabich Frishman in Tel Aviv. Even old-time falafel stands added sabich to their falafel-based menus. The sabich of today is even served as a sandwich in posh cafés and restaurants, rising from rags to riches.

The “godfather of the sabich”, the originator of the dish, kept selling it at the corner of Negba and Haroe, with his scanned id hanging on the wall showing his first name. Sadly, this culinary genius passed away a couple of years back, but his sons continue their father’s tradition and serve the dish with great pride.

Why Sabich Is The New Falafel