The Secret Ingredients For The Perfect Cholent: From Coke To Falafel Balls 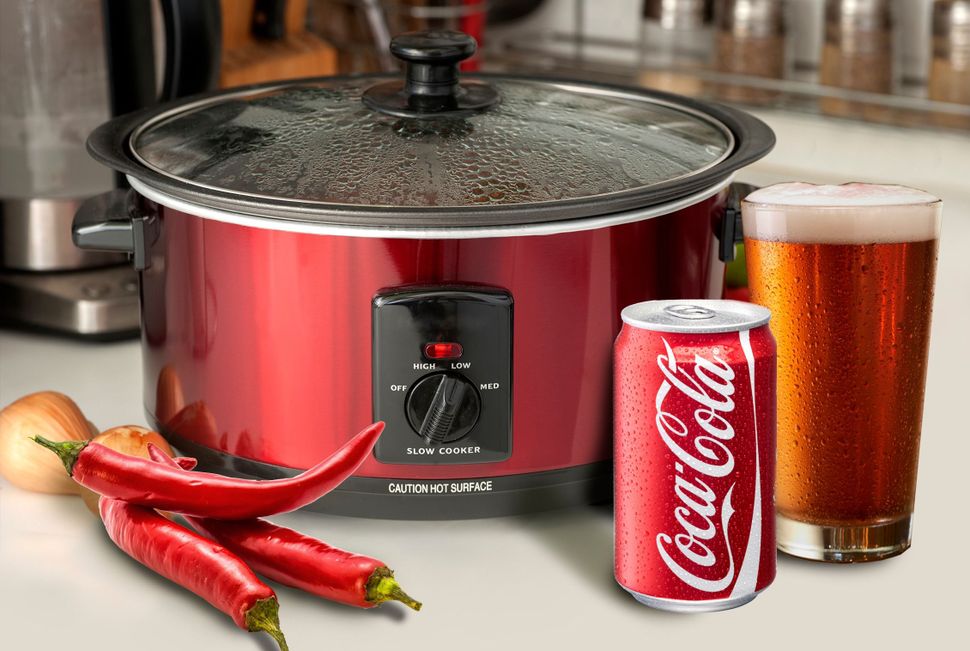 Growing up, one of the most egregious kitchen crimes my mother ever committed was cooking hot dogs and chopping them up into our Shabbat cholent.

Upon finding a hotdog in our cholent, we would collectively groan and push our bowls away. Cholent had a very small window of being good. It isn’t photogenic, it’s easily overcooked, oversauced or overspiced, and it’s heavy. In short, cholent is guilty of everything people accuse Ashkenazi food of being. Nonetheless, we stick by it. But it doesn’t always have to be awful.

Ask any Jewish cook and they’ll tell you they have a secret ingredient they add to their cholent to elevate it above the sum of its parts.

A cholent is a Jewish dietary staple of meat and vegetables cooked overnight, made on Friday to be eaten on Shabbat day. It’s a savory stew that your mother and her mother and her mother likely made. It’s equal parts crockpot, barley, beans, potatoes and meat. Slap a lid on the crockpot for twelve hours and you’re ready to feast. But it’s not just that. It could be much more – and it’s all about the secret ingredients.

“Cholent changes, depending on the locale and the customs. In America it is Americanized, and in other countries, like France, it is French-ified. We all add our ingredients that make it ours,” Jewish food doyenne Joan Nathan once told the Forward.

I turned to the Internet and to the Jewish community at large to find out what the most outrageous secret cholent ingredients are.

When it comes to cholent meat, people really seem to like flanken, Some think it’s too fatty for cholent. Some swear by it (“It’s the bones that lend a richer flavor to the cholent!” someone told me). A little pastrami or brisket in a cholent will go a long way towards making this humble dish something approximating gourmet. These meats can cook for lengthy periods of time without descending into dryness. When they are cooked so soft that they can be pulled apart by the delicate swirl of a fork, you know you’re ready to eat. You can put marrow bones at the bottom of the pot to add consistency and flavor. Beef cheeks respond to slow cooking by becoming gentle and tender, falling apart on the tongue.

A more scandalous idea? A can of Dr Pepper, poured into your crock pot alone with your barley, beans and what-have-you. It supposedly protects and balances the flavor of the cholent from enthusiastic overspicing, with items like chili powder, cumin, paprika and garlic. A more natural alternative to the can of Dr. Pepper is a can of beer. The alcohol will cook out, but the taste won’t. It’ll give your dish some depth.

“I never cook a cholent without a can of Coke,” a Facebook commenter wrote me. “It’s a liquidizer, a meat tenderizer and a sweetener!”

Whether it’s Coke, Dr. Pepper or the uncharted waters of Sprite, maybe it’s time to put some bubbly into your cholent.

Ever put chile in a cholent? Mixed around with the barley, beans and kishke, it’ll add some savory dimension to what can be a neutral dish.

Some swear by oats or cream of wheat, for thickness. They’ll lend a rich texture and consistency to your cholent.

You have your highbrow items, like sesame oil (because what can sesame oil not improve), to your more lowbrow items, like onion soup mix, ketchup and cinnamon. A classic addition to cholent? Sauteed onions. A twist on the classic? Whole baby onions. Letting them really marinate in the cholent will bring out the sweetness.

A cholent is a melting pot, literally. It’s a symbol of the endurance of Jewish food culture. It’s simple, nourishing soul food — but it’s also a way to experiment in the kitchen.

Remember: There is no such thing as a bad cholent. There are only good cholents that went terribly wrong. But a bad cholent is just an opportunity to tweak your recipe, to learn what works and what doesn’t, so tie up that apron and let’s get experimental.

Are there any secret ingredients I should know about that aren’t here? Write me at [email protected] about them!

The Secret Ingredients For The Perfect Cholent: From Coke To Falafel Balls