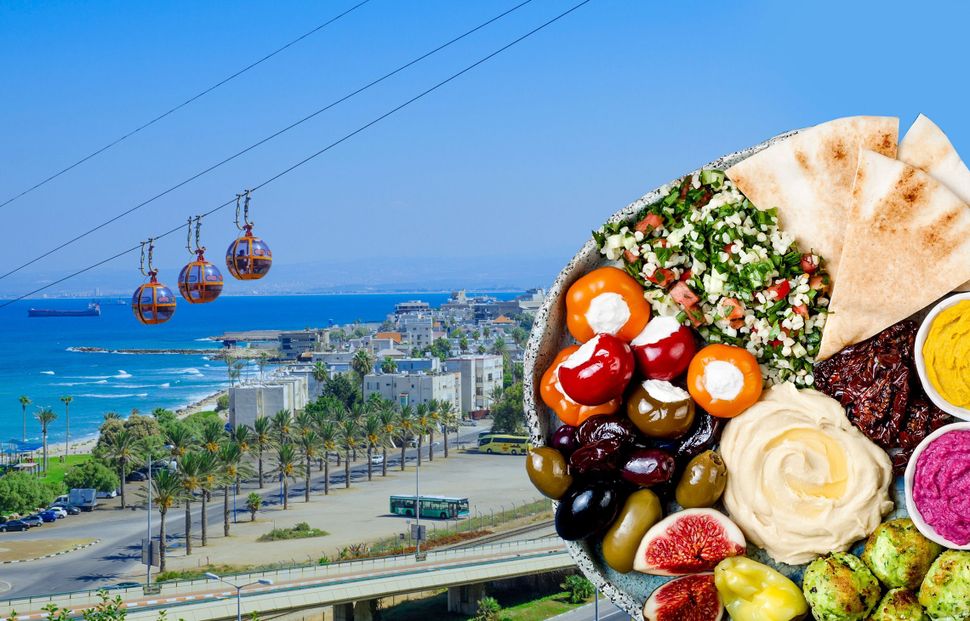 Crowd source on Facebook about kosher eateries in Haifa, and you’re likely to hear crickets chirping. Haifa is known for its co-existence: an exemplary display of what more peaceful times could look like throughout the entire country between Arab and Jew. Haifa is the place to go to see the meticulously landscaped Bahaii Gardens, from which you can see the whole of the Mediterranean Bay below, or to take a pleasant stroll along the beautifully carved coastline. And if we’re talking about food, it’s absolutely the right place to get some authentic hummus, explore Arabic specialty markets, and try Druze food — a practically unventured into and surprisingly-largely vegetarian cuisine. But few people know that it’s actually a good place to go when you’re looking for a good kosher meal.

Contrary to popular belief, there are some incredible kosher eateries hidden throughout the city — you just need to know where to find them.

Haifa’s downtown, an area that couldn’t be more than 1-kilometer wide is the center of the city’s largest renovation project in the last half century. This formerly rundown area has become the epicenter of the hilly city. The “under city” as is it called in Hebrew, lies at the base of the mountain on which this tree-lined, mostly residential city sits, pressing up against the sea coast, which sits just out of sight for the time being, blocked by the modern Israel Railways train line, and the cruise port. It is not well known, but here next to a hipster coffee shop, trendy Bistro, and Burger Bar, run by Christian Arabs, is Palmer Gate, Israel’s own Ellis Island, through which hundreds of thousands of immigrants set foot on Israeli soil for the first time.

Just a block away, along the main street are three famous kosher establishments. One is the original Shany Bakery which opened in 1964, and has since blossomed into a well-known chain coffeeshop. This location is still run by the Abromovich family who took over the business some 40 years ago from its original founder, an Austrian immigrant who was a baker by trade. Perpendicular to the coffee shop is another fierce competitor-Cafe Ava, who have served the city’s biggest selection of high quality coffees since the 1940s. The third historical spot that carries a kosher certificate is Borekas Bachar HaAgala. They started as a push cart selling the Turkish savory pastries and slow-cooked haminado eggs that were just as popular among the port area’s workers then, as they are appealing to passersby today.

Shuki Bachar is a third-generation owner, who spends his early mornings at the back stretching, filling, and rolling phyllo dough into the giant coiled up-snakes that get baked until puffed and golden brown.

As one might imagine, the gentrification of this area has also attracted newer establishments. Chicho with its Moroccan meatballs, is one of this area’s newly cemented kosher joints. Here since 2014, it is one of those places that everyone thinks is from Tel Aviv (They also have a branch in Tel Aviv’s Carmel Market), but really, they started in Haifa. Haifains are known for being a tough, hard-working lot, and this is far more conducive to sticking it out in the fickle food business than some others might be.

“In the past, kosher restaurants served as a solution for a traditional and religiously observant audience. Today, however, we are witnessing a growing demand among secular Jews for places where kashrut is strictly observed because people are actively seeking the healthier options that kosher-eating now provides,” remarks owner Beatrice Dayan.

Hers is a fast-food joint, but one that reminds you of a Middle Eastern grandmother’s kitchen. There, different pots of stewed meatballs, sit on simple hot plates. The Lamb, fish, chicken, and vegetarian-based nuggets nestled into bubbly tomato and vegetable sauces are waiting to be scooped up and stuffed by Beatrice or her son, Liel into their house-baked small loaf of Moroccan frena bread. Fueled by happy memories. it is meant to remind diners of hectic Friday afternoons, in a pre-Shabbat kitchen.

Another kosher eatery built on the heavy pull of nostalgia, is Meir Ptilyot. A 5-minute walk from Wadi Nisnas, the area with indisputably the area’s best Arabic eateries, and across the street from a Greek Orthodox church, lies this homestyle restaurant, where Jewish world dishes are made each day with fresh seasonal ingredients, and served to guests straight from the slow-cooking kerosene-fueled metal pots in which their flavors are slowly melded together. There the Meir family- one of mixed Romanian, Indian, and Moroccan heritage create dishes ranging from pilmeny, a sort of Russian-style meat tortellini in tomato sauce, to Iraqi kubbe soup — stuffed semolina dumplings served in a sweet and sour beet or savory vegetable-based soup with chunks of pumpkin and zucchini throughout.

Walk across the street, and up the steps that pass by the city’s court house, until you reach a magenta-flowered archway, and you will find yourself at yet another kosher establishment — Baricef Heritage Foods foods, this one an almost-all vegan eatery also specializing in the homey foods that owner Alon Bardicef’s grandmother once inspired him to admire and crave.

Having grown up a sabra, himself, his menu, which features Georgian salad with red quinoa, grated beets, and walnuts, also serves up a mean homemade couscous. Hot Turkish coffee gives off steam in the corner, as it’s kept hot in a red vintage kettle, and in the fridge next to the trendy recycled wine bottles filled with cool water, are malabi puddings made with creamy vegan coconut milk, house-candied pistachio nuts, and homemade rose syrup.

Walking back down at the bottom of that same street on the other side a 20-something hipster named Adam manages another Hasidic-themed restaurant, a Hummus restaurant called Hummus Eliyahoo. Stickers reading Na-Nach-Nachman M’Uman and abstract Hasidic art hang on the walls, which are no less than 100 meters from a public bomb shelter that bears the picture of the baby Jesus and Mary, outlined by Arabic writing, which sits just across from the building that served as the old Ottoman army headquarters during the empire’s 400-year tenure here.

And with all these kosher options, we have only covered the bottom of this great city. Up high in the city in an area known as Carmel Center, is Gal’s Bakery-an artisan bake-house making some of the best croissants and pies in the North, and the original Bardicef location, run by Alon’s brother Elad, who started and runs the original location as an upscale chef-style hummusia. Down by the beach in the Congressional center, the kosher sister branch of nearby Tatami, serves upscale sushi under a certificate.

One could be surprised by all these kosher food gems, and others that weren’t mentioned here, but the Galilee has long been experiencing a renaissance of sorts by way of artisanal food stuffs and products. After all, this region, for which Haifa is the coveted gateway, is one that produces some of the world’s best olives and olive oil, fine goat cheeses, and boutique wines and honeys — and Haifa is the ideal place to sample them.