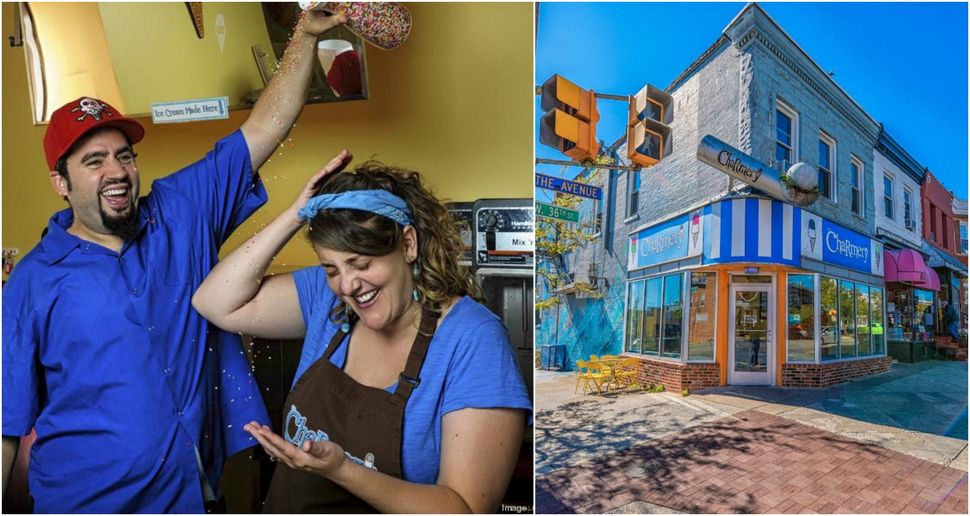 Shidduchs have been known to happen at Camp Moshava, the kibbutz-inspired, social justice-focused Maryland summer camp.

But the sweetest hookup story – literally – might involve David and Laura Alima.

In fact, The Charmery’s been so successful that the Alimas just opened their own production facility attached to a third retail location. “Baltimore’s embraced us from Day One, and the production facility will help us keep up with demand from the shops,” David Alima told the Forward. The Charmery’s also getting more corporate catering gigs, with clients like Netflix’s House of Cards and Baltimore’s professional sports teams.

“We’re offering flavors no one else is offering, and we’re pushing the boundaries of ice cream,” Alima said. “We collaborate with different musicians and artists, and we look for inspiration first in desserts from all over world, then in our community and our neighborhoods.” An Old Bay Caramel ice-cream draws on Baltimore’s beloved signature crab spice; Otterbein Sugar Cookie gives props to a close-knit downtown Baltimore neighborhood. The Charmery’s dairy is grass-fed and hormone free; “we also steer away from flavorings and colorings,” Alima said. “We make our caramel and chocolate bases in house. There’s so much flexibility and fun. The only limit is our imagination.”

The Alimas have also done their magic with Jewish-themed flavors. A tribute to Black Sabbath – the band – featured black sesame seeds and Manischewitz wine. Rosh Hashanah last year saw the rollout of Apples & Honey ice cream. Chinese Food & A Movie “was our tribute to everyone who doesn’t celebrate Christmas in a traditional way”, Alima said; it featured a buttered popcorn base and chocolate-covered fortune cookies. Matzo Crack appeared on Passover, with matzo pieces covered in chocolate, caramel, and dates. “But the whole point is that we’re a super-inclusive environment,” Alima said. “We do flavors for all sorts of cultures and religions, and we draw from them, too.”

Though the couple had no formal culinary training, Alima told the Forward that ice cream “was always part of my life. I made it at every opportunity I could.” While he worked in marketing, and Laura had studied hotel and restaurant management, “we would check out a city’s ice cream offerings wherever we traveled.”

After plans to restore a dilapidated downtown Baltimore diner fell through, “we looked at each other and said, ‘What are we doing?’” And The Charmery was born. Its first location opened on a busy corner in the city’s now-trendy Hampden neighborhood. “We saw shops all over the world that were taking ice cream to the next level, but we didn’t see it in Baltimore,” Alima said. “We also wanted to be a part of the community and do something that brought Baltimore together. That’s part of the reason we’re open late. There’s aren’t a lot of late-night options here that don’t involve alcohol. Our goal is to be community gathering spot.”

It’s not what either expected when they found each other at camp in 1999. “There was no assumption a summer romance would turn into the wonderful thing that’s happened,” Alima said. “But it’s not unusual from this camp. We have friends with the same anniversary as us. They’re now married with three kids.”