This Rosh Hashanah, Breads Bakery Is Making Its Own Honey 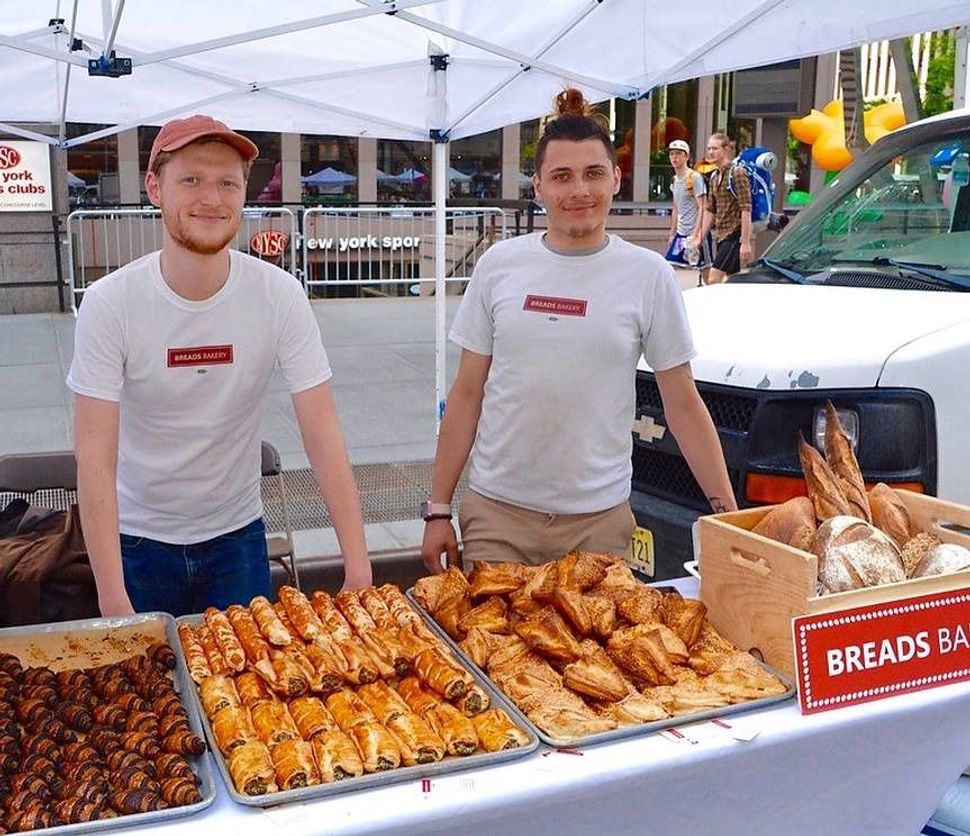 Around the High Holidays, Breads Bakery always feels like a hive of activity.

But this year, that’s literally the case.

For the first time, Breads is cultivating its own Rosh Hashanah honey by installing hives on a rooftop near its Union Square flagship in Manhattan. Breads will sell the honey in limited editions starting next week; if the experiment’s a success, the bakery plans to expand its business relationship with the industrious insects behind the all-natural sweetener.

The project started as a sustainability initiative, according to Gadi Peleg, Breads’ co-founder. “Local sourcing and zero waste has been on our minds, so we started a project to make Breads more sustainable several months ago,” Peleg told the Forward. “Maybe the impetus is that I now have two children, and I want to leave them a planet that’s habitable.”

Harvesting honey also feels closer to the spirit of Rosh Hashanah than using the commercial variety, Peleg said. “Deep in my heart, this feels like the correct way to do it,” he said. “I can’t imagine that brilliant folks who came up with our traditions thousands of years ago imagined we’d wish each other ‘shana metuka’ [“sweet year”] based on honey that came out of a factory in China. It’s nothing short of a miracle how these bees work together, commuinicate, defend their hive, and survive through difficult times. To me, it’s much closer to what the tradition is and what it means.”

On previous Rosh Hashanahs, Breads sourced its honey from the Union Square Greenmarket across the street; Peleg turned to Andrew’s Honey, one of those vendors, to set up the hives and train a Breads staffer in beekeeping. “This honey is actually honey, whereas much of the honey sold in major stores is a mislabeled honey substitute,” said Andrew Coté, who runs Andrew’s Honey. “The honey market is flooded with bogus sweetener masquerading as honey. This honey also has virtually no carbon footprint as it is produced just a few blocks away from Breads. There can’t be a more local ingredient.”

Peleg agreed. “It’s cool to control what we sell from the ground up,” Peleg said. “Any time we have an opportunity to do that, we will. We can’t start a wheat farm in the city, but how many products out there can you manufacture and control from a block away?”

Each hive should generate about 60kg of honey over the season, “which is a lot, but not enough to satisfy all of Breads’ demands,” Peleg said. The New York City descendant of an Israeli chain, Breads has retail locations in Bryant Park and the Upper West Side along with the Union Square bakery. Peleg said he expects customers will buy honey to accompany hugely popular holiday items like the Breads challah bowl, whose circular shape includes an indentation that’s the perfect fit for a small jar of honey.

Peleg’s already sampled the honey. “It’s amazing,” he said. “Each hive has a honey that tastes totally different, so we’re not going to mix them, unlike commercial honeys. The flavors are so unique that we’re going to create different vintages, depending on the hive and harvest. The first one we did had a spicy, minty flavor unlike anything I’ve ever tasted.”

There’s another bonus with honey, Peleg said. “Andrew likes to say that there are only two products in the world that comes out of non-kosher creatures: Mother’s milk and honey,” he said. “That’s also pretty miraculous.”

This Rosh Hashanah, Breads Bakery Is Making Its Own Honey