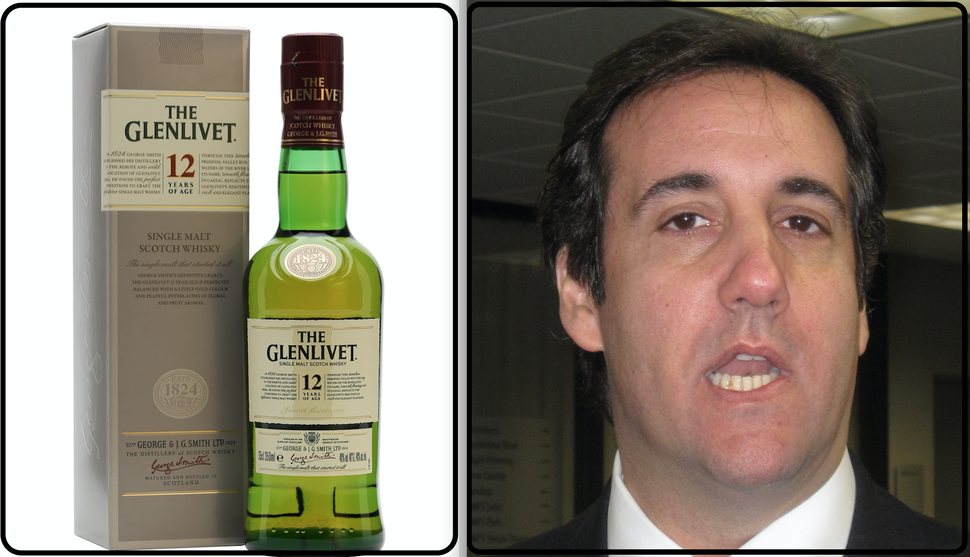 Michael Cohen entered a guilty plea on August 21 and, when questioned by the judge about his state of mind and consumption of drugs or alcohol said “Last night at dinner I had a glass of Glenlivet 12 on the rocks.”

As whisky correspondent for the Forward, I was asked by our political writers to shed light on this peculiar statement, and here are the five salient facts I think it’s safe to take from it.

1. HE IS STRESSING THE SYMBOLIC
We don’t know that he actually did drink the Glenlivet 12 but, even if he did, it would have sufficed to say that he had a single glass of whisky. His superfluous specificity shows that he is trying to make a point about who he is. He is clearly proud of his choice and wants people to know both that he drinks hard liquor, indeed a quality whisky, and that he does so in moderation.

2. HE’S A MAN OF THE PEOPLE
Although pleading guilty on the same day as Paul Manafort was found guilty has lumped them together as “Don’s Cons” (as per the New York Post), Glenlivet 12 is no ostrich jacket. Although prices vary from state to state and store to store, this is an affordable single malt, roughly in the $40 price range. He’s no wannabe oligarch, he’s a shady New York taxi lawyer and Mr. Fixit.

3. HE’S A MAN OF TASTE
Glenlivet is a delicious Speyside single malt. The area around the River Spey in Northern Scotland produces a number of whiskies, Glenlivet (literally the “Livet Valley”) is a global best-seller. That he’s claiming not that he’s drinking bourbon or a blended whisky, but drinking a single malt Scotch (i.e. a whisky that is all produced in a single distillery in Scotland) is an attempt to show that — whether he drank that whisky or not — he’s a man of taste.

4. NO LAST SUPPER
But that he’s drinking $40 whisky not, say the Glenlivet XXV (at about $400 a bottle, that I tasted at the 2010 Whiskyfest), shows that, unlike an earlier Jewish man in trouble with the court, this was no last supper. Cohen is saving the good stuff for later, so he’s confident there will be a later. This is a drink of a man with a second act.

5. KOSHER, AND NOT JUST FOR KIDDUSH
Whisky’s lack of a cultic past (unlike wine which has a long history of pagan usage) along with the simplicity of process and ingredients (water, barley, yeast) make whisky kosher by nature. Scotch whisky (without an “e”) is a protected appellation meaning that the Scottish consumer organizations act as a first barrier of kosher certification. Drinking it on the rocks is an interesting move. It’s probable he didn’t get the taste for Glenlivet on the rocks at kiddush because, in my experience, ice is rarely left out for the drinks at the end of a Saturday morning service. He’s telling us that he’s kosher, but he’s not going to follow lockstep with the community.

Let me know if you have more insights into Cohen’s drink of explicit choice, tweet at me, @danfriedmanme