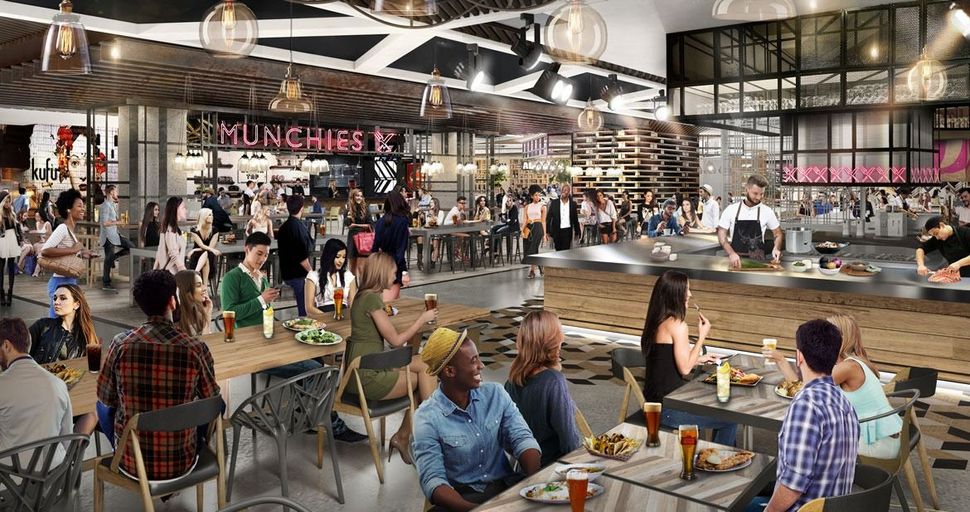 A monstrosity is being built in New Jersey, as you read this. In fact, you can watch the monstrosity being built on your computer, because it is live-streaming its construction on this site. And inside that monstrosity will be the only kosher food hall in any mall in the world outside of Israel.

For sixteen years, the American Dream Meadowlands mall has been just that — a dream. Various opening dates have come and gone. At one point it was meant to be Meadowlands Xanadu, a haven for sports fan containing things like raceways and baseball stadiums. Then it was going to be a Dreamworks-themed amusement park. Even Chris Christie got involved, calling it “by far the ugliest damn building in New Jersey and maybe America.”

The new property is set to contain roller coasters, a ski slope, water park, 4-D movie theater, aquarium and hockey rink. Construction costs about $3 million a day, according to Food and Wine, and will continue to cost that much presumably until spring 2019, when it is set to open.

Another thing the new property will contain in its 38,000 foot eating area? A six-vendor kosher food hall, the only one of its kind outside of Israel. When and if the American Dream ever opens, we can pretty much guarantee it will be overrun by Hasidim for about four days every single year, because that’s when Chol Hamoed is, and who wouldn’t want to eat kosher tacos while ice skating while watching a 4-D movie while checking out the octopuses at the aquarium during the Intermediate Days of the Festival of Booths?

Shira Feder is a writer. She’s at [email protected] and @shirafeder on Twitter.