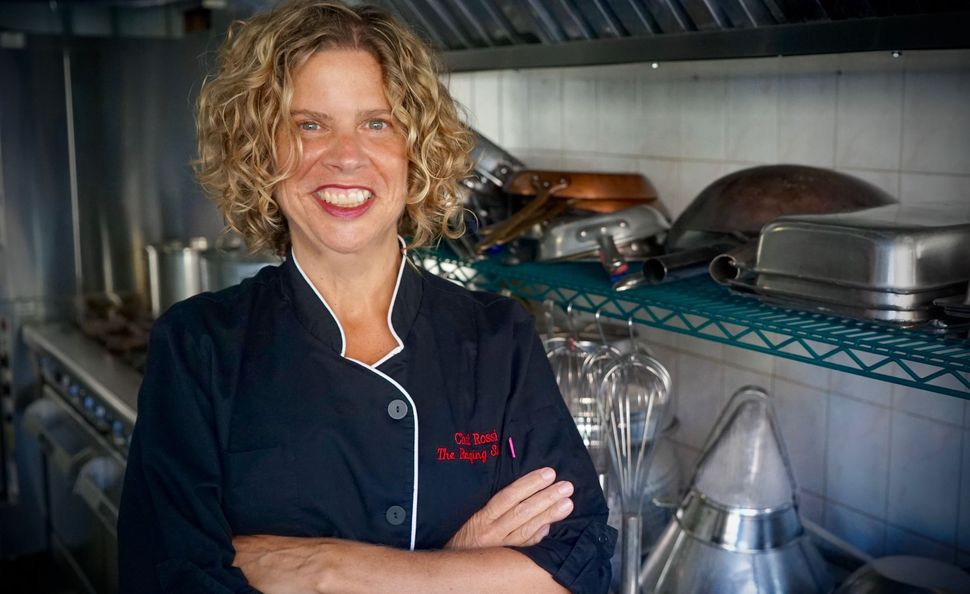 Lots of people have just one name. Madonna. Cher. Rossi. Rossi wears many hats, from lesbian to chef to Jewess to anti-microwave activist. Chef Rossi’s story, which is currently being turned into a play based on her 2015 memoir, both called The Raging Skillet, is one that begins with a rebellion against Orthodox parents and ends with Chef Rossi becoming New York’s #1 self-named punk-rock caterer.

After throwing a wild Jersey Shore hotel party in high school, Rossi’s parents shipped her at age sixteen off to live with a Hasidic rabbi in Crown Heights, Brooklyn. In the big city, Rossi recognized her dreams of revolting against tyranny by becoming a chef.

Rossi’s writing ouvre spans being a Chrismas-loving Jew, catering same sex-weddings before anyone else wanted to, and being out and proud (excerpt from the article: “I’m gay!!!!!!!!”)

Her real name is Slavah Davida Shana. “Can you imagine calling someone Chef Slavah?” Rossi said. “She sounds like someone who’d be making perogies on the side of the highway. So I went from sounding Hungarian Jewish to someone who sounded Italian really fast.”

Rossi’s cooking career began as a revolt against the microwave. In her teen years, she disappeared into “a cloud of Marlboro Lights, marijuana, cheap wine, and chocolate,” according to her biography. That was when she first discovered she loved the oven.

Shira Feder: So what is it about the microwave you hate so much?

Rossi: Growing up, my mom was always making slow-cooked Hungarian food, goulashes and stews, things that would simmer on the fire for longer than some relationships I’ve had But we wanted boxed mac ‘n’ cheese, frozen pizza bagels, and spaghetti with meatballs. One day my dad shows up with this big thing. It’s a microwave. That was the end of food as we knew it. Suddenly everything had tomato powder and zero cook time.”

So I began to cook instead and everyone started being nice to me. My sister asked if she could borrow my underwear instead of stealing it, my father asked if he could change the channel instead of just doing it…I found out food has a lot of power.

How did you end up in Hasidic Crown heights?

Well, when I was sixteen I ran away from home. I was on the lam for three months, just having a good old time. I looked like I was thirty five, just old and tired and giving out drugs and alcohol to my friends who all looked sixteen. They arrested me on the charge of corrupting minors. I didn’t want to give them my ID because then my parents could find me. Once they threatened to put me in a cell with a prostitute named Luscious Lucy, I changed my mind.

My parents had heard of a rabbi in Crown Heights who specialized in turning around wayward kids. So they sent me, this pink-haired punk rocker, to one of the most dangerous areas in New York at the time, because they hadn’t read the newspaper. There were like 1800 murders in Crown Heights in the 80s. It was a war zone. I had to live with the Hasids till I was eighteen.

Your path as a chef was pretty interesting. I read that you improvised grills at Ground Zero just after 9/11. You catered the Vagina Monologues after-party, with a vagina-shaped fruit platter. NYT describes you as the “rebel anti-caterer.” What did you do to get that title?

Well, I started as an old school personality bartender. It was like the Jewish version of Cheers, serving the same thirty drunks who’d never want to leave. I had to feed them or they’d throw up on the bar. I would go to the back of the kitchen and pilfer and invent things like the nachos of the night. All of that tastes really good when you’re drunk.

When I was 24, I decided I wanted to cook instead. It was the 80s and women weren’t welcome in professional kitchens. But there were lots of class action lawsuits about not hiring women, so I got hired by the creme de la creme, Avery Fisher Hall in Lincoln Center. I’d get hired places and they’d do everything they could to make me quit.

“Jewish mothers never die,” your mother announces in the play, when she appears on stage despite dying in 1992. What is your relationship with Jewish guilt and your mother?

My mom was the queen of the guilt complex. She used to say, ‘Slavah, if you ever eat pork you’ll smell your ancestors burning.’ She had it in her head that my great-great-great whatever had been burned at the stake by Queen Isabella for refusing to eat pork. I still can’t eat it, but I can cook it. She died of heart failure, when she was driving back from Florida to New Jersey. I’ve played our last conversation back a million times. Seeing someone act as my mother on stage is a bit scary because a lot of it is verbatim from things that did happen. Like everything with Jewish mothers, it’s with heart and soul and a little too late.

What’s your favorite kind of food to cook?

The restaurant business is a terrible combination of boredom and stress. It’s high octane cooking but you’re making the same swordfish you always do. I always have different items. I’m a multicultural caterer. There’s not a lot of caterers you can go to if the groom is Jamaican and the bride is Jewish. But they went to me, and I served jerk chicken on latkes.

You’re an out and proud Jewish lesbian. How did that affect your career?

When I first started catering, if you did a gay wedding, you weren’t welcome. I wanted to be a safe haven for these alternative weddings. If a homophobe was going to be scared away by that, then, well, life’s just too short.

I had a client who said ‘I just Googled you and read what you had to say.’ That was before I even knew what Google was. I thought, I’m going to be as out as out can be and it’s going to ruin my business. Then I thought about it some more and said no, if anyone’s not going to hire me because I’m gay, I’m just too old and tired to crawl back in the closet.

‘Molds are a wonderful thing to break!’ Is the motto of The Raging Skillet. What molds did you break?

When I first started cooking in the 80s food looked nice but tasted like lineoleum. No one ever marinated, crusted, seared anything. People always wanted chicken cordon bleau or poached eggs…

Once I changed my business’ name [to the Raging Skillet] I got spectacularly interesting requests. Catering the Vagina Monologues afterparty with anatomically correct fruit platters. This one bride wanted people fed from a bathtub. Maybe she ate a lot in the bath as a child, I don’t know. We hauled in an eight foot brass tub, piled it with ice and caviar and it looked pretty good – until the ice melted and bride put the groom in the bathtub.