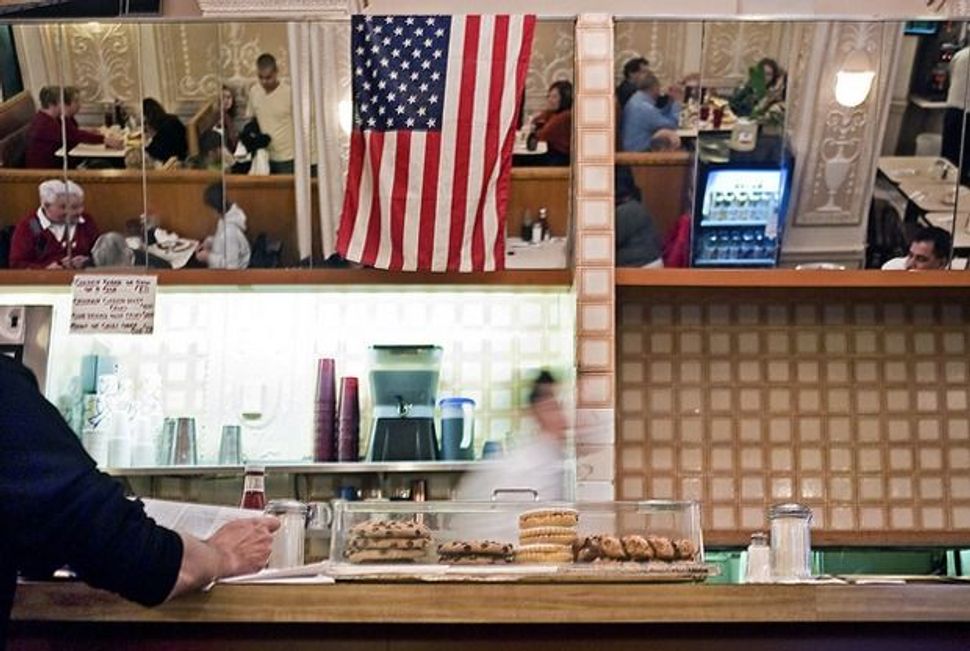 She was a Holocaust survivor who shared fed Broadway’s elite – and Times Square characters — at a heimish eatery so beloved it inspired a Neil Simon play.

Frances Edelstein, who ran Cafe Edison with her husband, Harry, for 30 years, died in New Jersey this week at 92.

The couple had run lunch counters in Brooklyn when a friend who owned Midtown’s Edison Hotel asked them to take over his restaurant. Relaunching Cafe Edison in 1980, the Edelsteins “turned it into a bastion of matzo brei, borscht and corned beef, served in generous portions,” according to The New York Times. “It makes me happy when I think of all the gentiles we made Jewish,” Frances Edelstein told the Times in 2001.

That same year, Neil Simon’s “45 Seconds to Broadway,” opened in New York, set in a restaurant he called the Polish Cafe; it was a loving tribute to the Edelsteins and their eatery. Cafe Edison earned the nickname “The Polish Tearoom” from regulars; it was a sly spin on New York’s “Russian Tea Room,” a gilded midtown hangout. Until its closing in 2014, Cafe Edison became a favored hangout for Broadway actors, directors, and theater hangers-on, along with hordes of tourists. The Edelsteins even earned an honorary Tony award in 2004.

2004 #TonyHonors recipient Frances Edelstein presided over the “Polish Tea Room” a.k.a. the Cafe Edison. She was the model for “Zelda” in Neil Simon’s 45 SECONDS FROM BROADWAY. She has passed away at age 92. Rest in peace. @nytimes obit: https://t.co/OyaVbRh1YH pic.twitter.com/x5klz2H5nF

Frances Edelstein was born Frima Trost in Poland in 1926. Except for one brother, her entire family died in the Holocaust. Her husband’s family was also murdered by the Nazis in Poland. The couple married in Warsaw, and arrived in the US in 1947.

It was recipes she remembered from her own mother that inspired Frances Edelstein’s cooking. “If my grandchildren wanted kreplach — which aren’t easy to make — she’d have 100 of them the next day,” Frances Edelstein’s daughter, Harriet Strohl, told The New York Times. “They’d say, ‘Oh, bubbe, we haven’t had stuffed cabbage in a long time’ — she’d make 30 of them.”