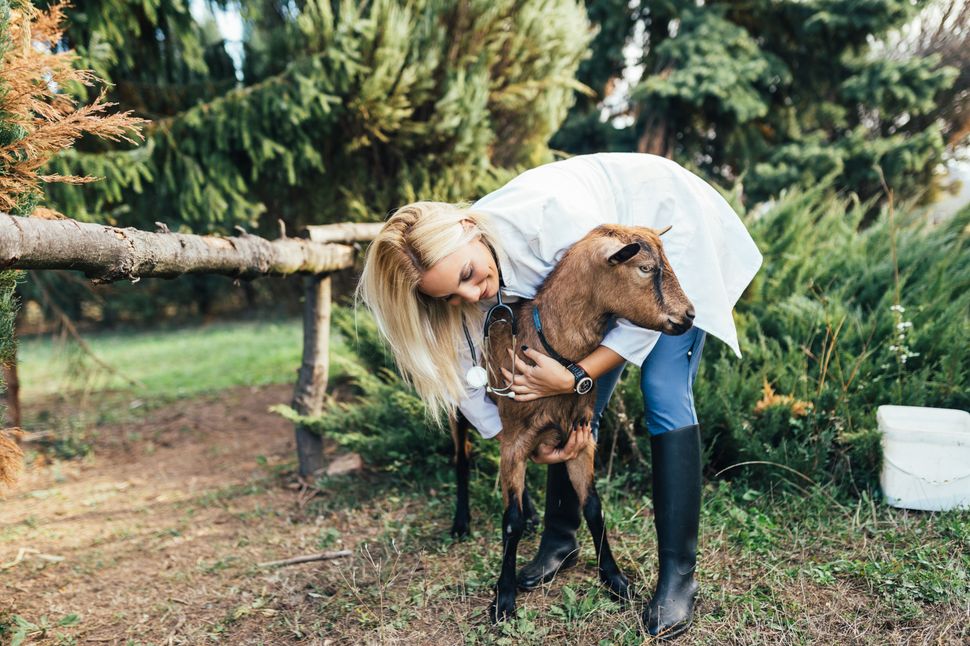 In the wake of a terrifying UN climate report, which announced that mankind has twelve years to wean itself off its fossil fuel guzzling, steak swilling, energy-overusing ways, people are looking about for any way to save our thoroughly rattled planet. One solution? Goat meat.

While attaining kosher goat meat might prove to be a daunting task these days, some Jewish environmentalists believe it’s the key to a sustainable future. “Not only is goat often referred to as the healthiest of red meats, but it’s good for the planet, too,” wrote Julie Kendrick in a recent Huffington Post article extolling the virtues of goat meat. But eating goat means changing the American mentality towards meat; which meats are acceptable eating and why.

Larry Kerman, a 62-year-old attorney from New York, is a fan. “I’ve had it as chunks in a curry,” he told me. “I would say it tasted exactly like beef stew.” Artzenu, an Israeli company based out of Safed, Israel, that specializes in organic, pasture raised meat, like chicken, lamb – and goat. “People love goat, it’s very popular. We don’t have it regularly on the menu because it is hard to find a buyer for the back half of the goat,” a representative for the company wrote. Another place to buy goat, aside from the fascinating underground, likely unregulated market of kosher goat on Alibaba, is Grow and Behold, a kosher pastured meat company run by Naf & Anna Hanau (“Our courtship story went something like this: We are going to get married. We are going to have a farm.”)

Amanda Lindner, director of communications at Avodah, a Jewish non-profit focused on fighting poverty, disagrees. “Goat meat is 100% not the answer to Jewish sustainability or world sustainability at all,” she wrote. “We need to stop our meat addiction — not just find slightly ‘less bad’ ways to do it.”

That’s all well and good, but Americans are a nation of meat eaters. According to the USDA’s 2017 numbers, individual consumption of meat was about 222.2 pounds a year. For inbred carnivores, making the world a better place is likely not to involve giving up the consumption of animals.

So why goat? According to Dan Barber, of The “Third Plate,” “Good food cannot be reduced to single ingredients. It requires a web of relationships to support it.” So what ingredients are goat made up of? Many believe eating meat grown with grain is ecologically unsustainable. Goats, in particular, can be fed on byproducts that aren’t grain. Adding goat to the variety of meat Americans consume will take the burden off of chickens, lamb and other forms of meat. Not to mention they’re easier to raise than cows.

“Sure, I can be a goat meat advocate,” Shamu Sadeh said. He’s spent 15 years manning the fort at Adamah farm at the Isabella Freedman Center in the Berkshires, Connecticut. They’ve got chickens, sheep and goats, which they use for goat milk, cheese and occasionally shecht (ritually slaughter) for food. Part of what happens at Isabella Freedman is a calibration of people’s minds of how things are supposed to taste. “People who were raised in an industrial system expect meat to taste bland,” he said. “There’s the ‘it tastes like chicken’ which I think means it tastes like nothing, or whatever you spice it with.”

Sadeh’s goats live a fairly blessed life, as far as goat existences go. Part of what defines the taste of goat is what it eats when it is alive. Sadeh’s goats are pasture-fed, rotated, moved every week to a new piece of pasture, and Sadeh even brings them the brush they consume.

And why goats? “It’s a very human scale animal,” Sadeh said. You can pick a goat up. You can move the goat from pasture to pasture. Slaughtering it is a simple equation of one person and a knife, unlike the more involved procedure of attaining beef.

There’s an interesting cultural connection as well, as Muslim and North African communities also consume goat for their festival meals, and they’ll often buy them ritually slaughtered, for halal purposes.

So how long have Jews been eating goat? From Moroccan goat stew to slow cooked goat shoulder, Middle Eastern and North African Jews have been feasting on goat for generations. “And in Europe too,” says Sadeh. “Because if you couldn’t afford a cow, you could afford a goat.”

If we could put down our steak knives for a minute, would we discover that the ethical farming that’s good for the goat is also good for the gander? It’s looking like it.