Israel’s Humble Doughnut Glams Up for the Age of Instagram 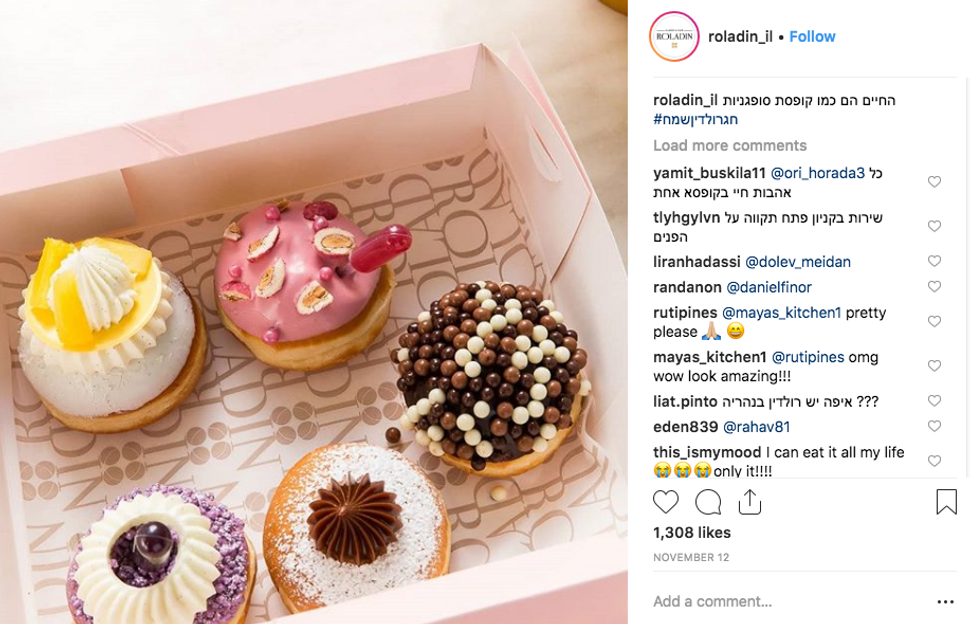 Sufganiyot, the humble Israeli doughnut eaten at Hanukkah, is humble no more. The traditional treat: a round spongy doughnut, not enough jelly, too much powdered sugar–has in recent years evolved into an extravagant pastry right for the age of Instagramable foodstuff. Across Israel, bakeries compete for buyers’ attention with elaborate, gaudy designs described with such haute patisserie jargon as glaçage and dragée and Dacquoise.

“Designs” is fitting, too, because many of Israel’s bakeries have taken, in recent years, to calling their Hanukkah recipes “collections.” Perhaps most closely associated with the holiday, country-wide baked goods chain Roladin now publishes annual doughnut catalogs with models styled and made up to resemble the year’s collection of doughnuts.

Hanukkah, known as the Jewish festival of lights, is an eight-day holiday celebrated each winter around Christmas time. It is marked by lighting candles in a menorah and eating fried foods, especially latkes–the Eastern European fried potato patties, and the aforementioned doughnuts. This year, Hanukkah begins on Sunday, December 2.

A lackluster chain of bakeries year-round, Hanukkah is Roladin’s time to shine. It is widely credited as the harbinger of the new age of the sufganiyah. In recent years, the chain has taken to introducing the fried treats to market earlier, this year propping up doughnut displays as early as October. In its ad campaigns, the chain has switched the familiar greeting of “Happy Hanukkah!” for “Happy Roldain Holiday!”

“Our chefs begin working on the new collection eights months before the holiday,” a spokeswoman for Roladin told Calcalist last week. In their creative process, she said, “they visit the most prestigious food shows and the elite patisseries of Paris.” According to her, a week before the holiday Roladin already reported a 15% increase in sufganiyot sales compared with last year.

According to Roladin, Israelis love all kinds of sufganiyot, but the most popular ones are still the classic strawberry jelly doughnuts, which make up for 25% of the sales. Other simpler doughnuts, filled with dulce de leche, whipped cream, or chocolate, are also popular. Like the grand fashion houses who put together elaborate haute couture collections only to make the bulk of their revenues in monogrammed wallets, Roladin’s fashionable collection of sufganiyot, it seems, is also mainly for the show of it.

On Sunday evening, a weeks-long survey carried out by Tel Aviv-centered Facebook group Secret Tel Aviv showed Roladin to be the most popular seller of sufganiyot by a landslide, with 235 of the votes. It was followed by another national chain, Shemo, with 38 votes.

Operating nine locations throughout the country, days before the holiday Shemo had already sold “thousands” of doughnuts daily, a spokeswoman for the bakery told Calcalist. Like other local bakeries, Shemo’s bread and butter is the classic jelly doughnut which sells for $1.34 (NIS 5), but special doughnuts have become increasingly popular in recent years, the spokeswoman said.

A Tel Aviv-based bakery run by graphic designer and entrepreneur Chloe Webb, the Showroom Bakehouse churns picture-first pastries year-round. Last year, Hanukkah treats were inspired by theme-parks, with cotton candy, candied apple, and popcorn-flavored doughnuts. This year, sufganiyot are inspired by the characters of Alice in Wonderland. According to a spokeswoman for the Showroom, the most popular doughnut this year is the “Hypnotic,” a sufganiyah sandwiched between two macaron wafers.

“Each year, we try to outdo ourselves in design and taste,” she said.

This story originally appeared in Calcalist on December 2, 2018

Israel’s Humble Doughnut Glams Up for the Age of Instagram