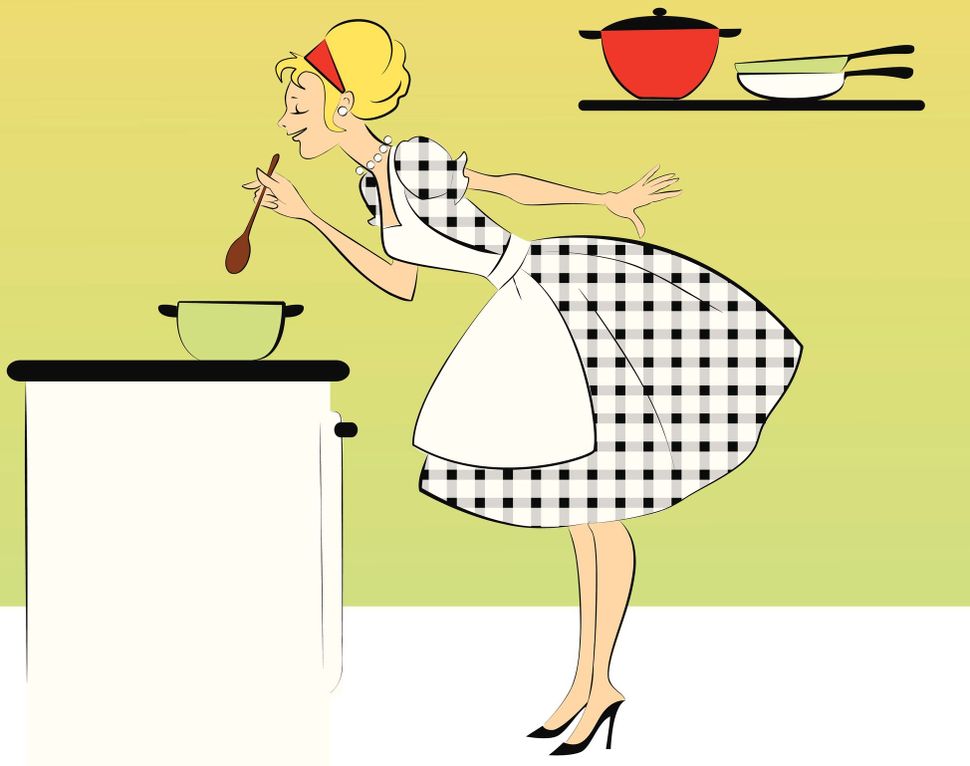 The year is 1975. A woman named Martha Rosler stands in a kitchen surrounded by gadgets, picking up each of them and naming them alphabetically with precise, controlled, angry movements. It’s an indictment of a certain kind of cooking demonstration, performed by the likes of Julia Child, and an indictment of a certain kind of women, the kind comfortable in a kitchen and pleased with her panoply of accessories.

In 1975, Rosler’s performance art piece “Semiotics Of The Kitchen” made a lot of men angry. Now it’s open for interpretation. What does “semiotics” mean, now that the famous chefs in the kitchen are mostly male, and cooking is something that has transcended the domestic sphere and become a form of entertainment, if not art? Well, Martha Rosler told us herself.

SF: What was your intention when you created “Semiotics Of The Kitchen?”

MR: I don’t know that I had an intention, except a reaction to cooking shows and to the representations of women in relationship to the male chef. TV culture created the housewife chef. You had Julia Child, who had the good sense to be retailing French culture, which is seen as elevated, but sending the message for middle class housewives that ‘you can do this too,’ which put women in a funny position where they had to up their game as cooks.

SF: So in your opinion not much has changed?

MR: Well, its waxed and waned, and there’s a big attempt to have diversity and gender in the field, but it’s still largely a man’s game, and women are celebrated, but it’s kind of like ‘atta, girl.’ 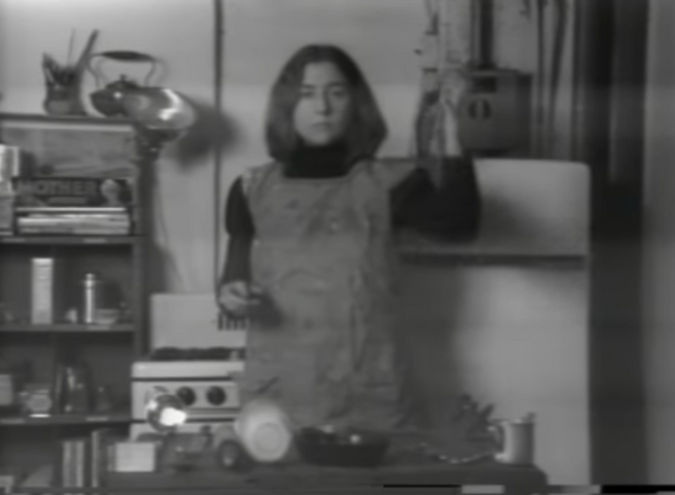 Image by Screenshot, Semiotics of the Kitchen

MR: Exactly. And this is also teetering on the edge of gay culture because men who were too interested in cooking were often understood to be gay. What men were supposed to cook was restricted to things you could shoot. Or hamburgers, which are the byproduct of things you can shoot, though you wouldn’t shoot a cow, I guess.

SF: You can kill a cow and it’s bloody, so it’s similar…

MR: Harking back to the caveman! So I was interested in showing a couple of things with this video. One is the televisualization of the home kitchen, because after all Julia Child was filming in her suburban home kitchen. And of course TV at the time was a box so my operative metaphor was in the box, the box being the kitchen, but also the television screen.

It was meant to be reductive, all the tools are hand tools. there’s no Cuisinarts in this piece. No egg beaters you plug in the wall. Everything is primitive. The representation of the woman is primitive. She is a sign system. It’s really not a semiosis, it’s more like a vocabulary, an alphabet. The ideological picture of the woman is this reductive picture of a woman stuck in the kitchen, whether she wants to be or not.

Image by Screenshot, Semiotics of the Kitchen

SF: The only language the woman in “Semiotics” has is the language of naming the kitchen utensils. Do you think women today are limited in the same way, in what we can speak?

MR: Well, there is no culture that doesn’t limit the things that are safe to talk about. the fact that they’re constantly expanding is evidence of the bourgeoisification of an educated public and the expanding role of consumer choices.

SF: So what role does food play in women’s lives?

MR: We love food, we need food, food comes right out of a woman’s body to feed an infant. It’s a direct skin on skin bond, which we’ve gotten back to after its dismissal as pre-modern, and something that ties a woman to biology when she really wants to be in an office, but we’ve fought our way past that ridiculousness. The Kantian notion of the faculty of taste is considered by Kant to be low and basically pornographic. So we’ve decided the hell with Kantianism, because we’re postmodern, whether we think we are or not. Food is food, taste is taste, and we can regard food production fully as works of art, and in fact better, because we get to eat them.

SF: What does that shrug at the end of “Semiotics” mean?

SF: I saw that shrug, and a little half smile, as saying this is what it is, and also that there’s a bit of power in it, in a woman’s space where they get to wave knives around.

MR: It was universally derided by men who said they felt threatened, or art world men who said it wasn’t serious. But there have been hundreds of tribute videos, in which women find this thing so empowering that they promptly make a video about technology or bicycles or whatever.

SF: And there’s a power to naming things.

MR: I’m a graduate of yeshiva [day school]. One of the first stories they tell you is about how everything in the universe got named. It sounds idiotic, but I see a direct relationship to being a person of the book, and the work that I’ve done, with liturgies and naming things.

SF: What do you think people take away from “Semiotics?”

MR: Some of my works are demanding, and some are completely transparent, like you see it, you get it. “Semiotics” was meant to be immediately comprehensible, and I guess it is. I see that as a virtue.

Martha Rosler’s “Semiotics Of The Kitchen” is currently on display at the Jewish Museum.