Babka Fervor Is Spreading From Brooklyn To The Bay Area 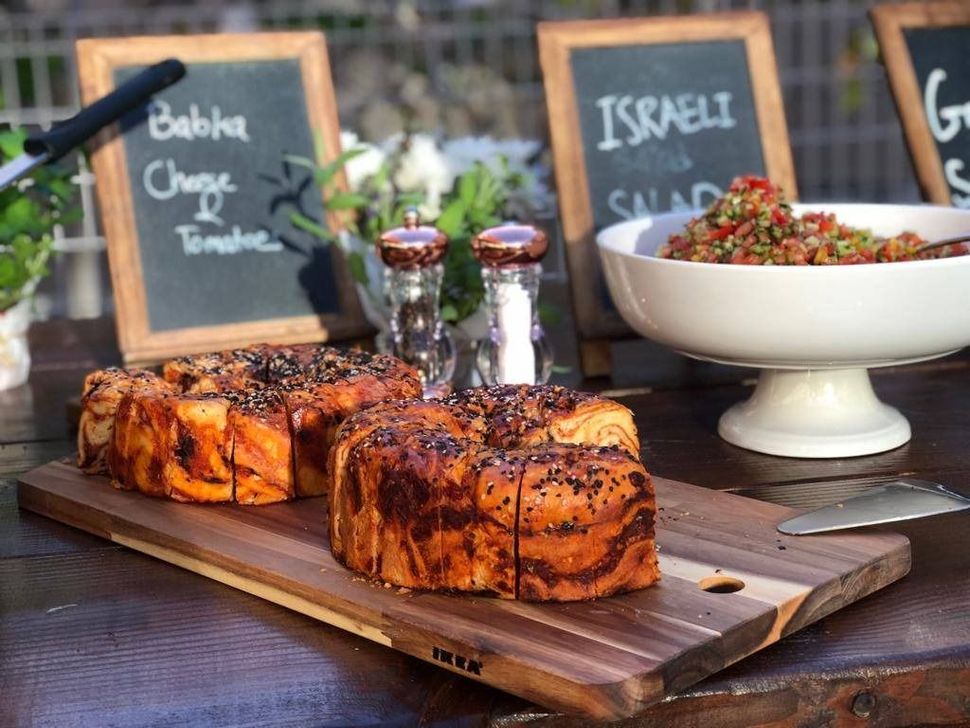 Despite New York’s recent babka boom, it is Palo Alto, of all places, that is home to the only babka-centric bakery in the world. Silicon Valley’s appetite for babka has proven insatiable at Ayelet Babka Bakery, where the sweet and savory babkas sell out by early afternoon every day.

When the bakery’s founder Ayelet Nuchi was training in a culinary school in San Francisco, Ayelet fell in love with the eastern European pastry. But she could not find a chocolate babka or recipe to her taste. Ultimately, her singular babka evolved from merging four recipes from Tel Aviv’s Dallal Bakery. As a caterer, she had always provided chocolate babka in the tea and coffee corner at the events, whether the event planners had ordered it or not. Guests found themselves going especially wild about the chocolate babka.

New York’s chocolate babka boom has expanded into a proliferation of artisanal offerings at quite a few bakeries, and feeding multiple claims for best ratings in food blogs. This contrasts with limited babka availability on the West Coast. A recent hunt for chocolate babka in Los Angeles found that Lodge Bakery — which bakes a chocolate babka only on Saturdays — did not have any at all. By 10:30 that same morning, a neighboring patisserie had not yet managed to bake their babka. The iconic Canter’s deli does not even sell babka. Its “chocolate coffee cake” tastes like a cake rolled around melted chocolate chips. I am told that there has to be chocolate babka elsewhere in LA. Surprisingly, Katella not far from Disneyland (in Las Alamitos) sells a very rich, chocolatey, and reasonably priced babka. In Northern California I hear that Wise Sons deli (San Francisco) serves up babka. At least Ayelet’s babkas ameliorates this West Coast scarcity.

During the past five years, I have sampled lots of chocolate babka, including at our Brooklyn-based ‘babkathons’, tastings that coincidentally fell on Sundays of the New York Marathon. Scouts gathered and ingested around 15 different zaftig (fat) babkas, while runners traversed the boroughs expending calories. Not surprisingly, the winning babkas tended to be heavy on chocolate.

From Brooklyn to the Bay Area, babka’s popularity keeps growing, from sea to shining sea. Looks like our ‘babkathon’ scouts might need to head West, or, at least to Ayelet’s Babka Bakery.

Rabbi Deborah R. Prinz lectures about chocolate and Judaism around the world based on stories from her book, “On the Chocolate Trail: A Delicious Adventure Connecting Jews, Religions, History, Travel, Rituals and Recipes to the Magic of Cacao” (second edition, Jewish Lights). The museum exhibit based on the book, “Semi[te] Sweet: On Jews and Chocolate,” is now available to travel to your community from the Bernard Museum, NYC. Prinz just launched the Chocolate Babka Project, an exploration of chocolate babka and its cognate cake breads from multiple cultures and religions. Follow it at onthechocolatetrail.org and share your stories about babka and other celebratory yeast breads at #chocolatebabkaproject.

Babka Fervor Is Spreading From Brooklyn To The Bay Area