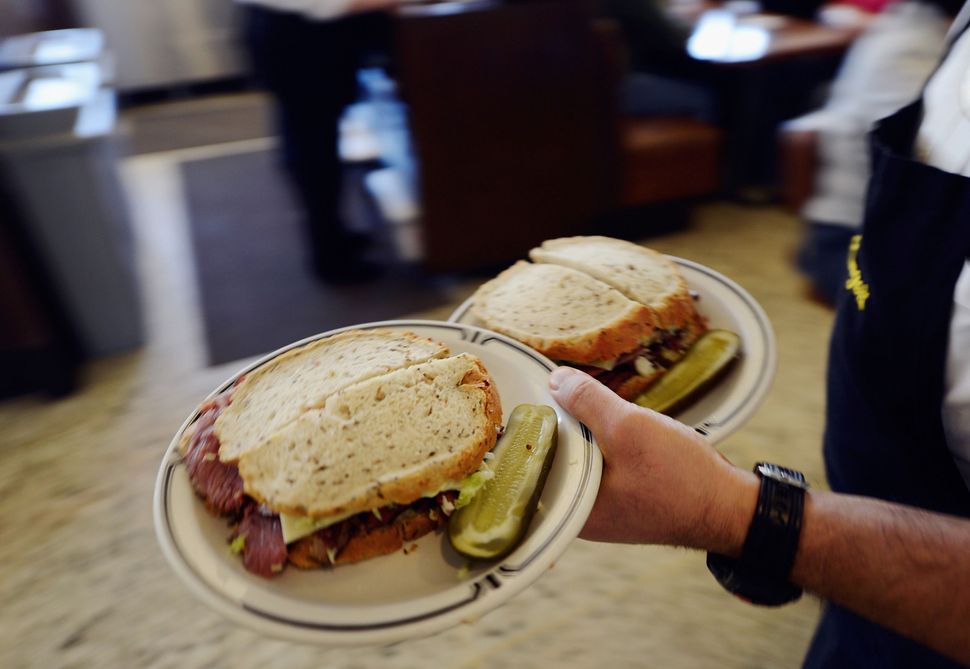 David Phillips and Evan Susser started their podcast, “Deli Boys,” with a simple mission: Rank the 14 Jewish delis in Los Angeles. They underestimated the impact their endeavor would wreak on the restaurant industry.

“We started doing this podcast and the craziest thing happened,” Susser, a screenwriter whose credits include the 2017 comedy “Fist Fight,” told the Forward over Skype. “We seem to be experiencing a deli boom here in Los Angeles. The question is, now that there are more than 14, do we keep on reviewing?”

“These delis are clearly opening up to get on our list,” Phillips, a writer for NBC’s “Brooklyn 99,” concurred from the same room as his co-host. “Do we want to give in to that kind of tactic of them saying ‘Oh, this list is open. If I start a deli I’ll automatically have a business with all of David and Evan’s family members who listen to this podcast?’” 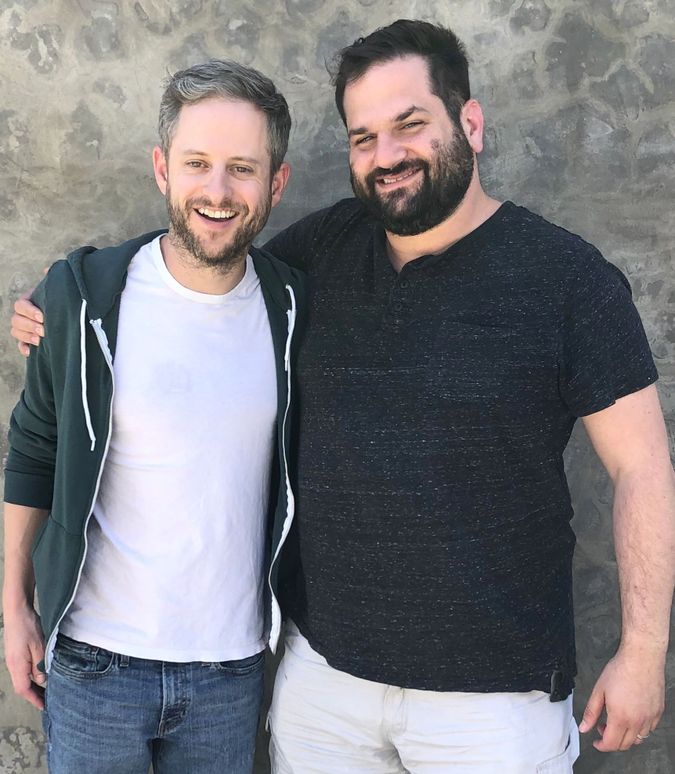 One thing’s for sure, Susser and Phillips want your Jewish parents listening to their podcast. (Hi, Mom!) Phillips even began the first episode with a call to his mother to ask for her thoughts on the show as a concept. (He’s since lost her as a listener to other Jewish entertainment like “The Marvelous Mrs. Maisel” and is looking to make up for her absence by collecting other matriarchs.)

“Deli Boys” began life on a competing food podcast, “Doughboys,” where Susser is a frequent guest and the self-appointed commissioner during the show’s annual “Munch Madness” battle of chain restaurants. Phillips and Susser guested on an October 2018 episode of “Doughboys” reviewing the L.A. staple Canter’s Restaurant. After one of the Doughboys hosts, Mike Mitchell, made the on-air assertion that their rating for Canter’s would stand-in for all Jewish Delis, Susser and Philips came on mic to announce that they would occupy the deli space in audio entertainment, launching “Deli Boys” on December 2, 2018, the second night of Hanukkah.

While “Doughboys” has a cultural specificity broad enough to appeal to most older Millenials, “Deli Boys” is a show with an old soul befitting its subject.

Each episode opens with a recorded call with a member of Susser or Phillips’s family. Often, the talk circles around corrections from previous episodes (e.g, Susser’s mother’s displeasure with him for not knowing that Purim is a holiday without a work prohibition), or chatter about Sandy Koufax, Phillips’s mother’s homemade pickled tongue and the tidbit that Susser’s bris in Maryland was catered by a Long Island deli.

From there the track launches into a Klezmer-y fanfare composed by L.A. musician Danny Cohen. Its lyrics are pure schmaltz: “Matzo balls and rugelach/Pastrami and corned beef/A pound of this a pound of that/Don’t forget the chicken fat,” — the song ends with a cheer of “L’Chaim!”

The front matter of the show, which precedes their appraisal of that week’s restaurant, comprises a number of segments that are still in flux. On the most recent episode, Susser and Phillips introduced a “Jewish Moment of the Week” segment in place of a hotly debated feature called “The Two Questions” that, while officially retired, still gets discussed a fair amount.

When asked about The Two Questions – infamous for the second question’s potential to make guests uncomfortable — Susser and Phillips requested listeners tune in to learn what the queries are (suffice it to say it involves a rather sensitive feature of our people’s covenant with God). But the Deli Boys noted the questions’ controversial nature pointed to something elemental in the Chosen People’s souls.

Following the kiboshed questions, Susser and Phillips used to spin a dreidel to decide the next portion of the show. They inevitably landed on gimel for a game they called “Guilt or Gelt,” where they would extract an often-unreasonable promise from their guest that he or she might only opt out of for an equally unreasonable fee. Lately the pair have taken to giving guests the opportunity to win money by correctly identifying fake and real Jewish customs (reserved for a gentile third chair) or ranking ABC’s Friday night TGIF lineup from most to least Jewish TV show along the lines predetermined by the hosts.

When the discussion about the meal starts, the show enters into nigh Talmudic territory. While a good deal of their decision-making of where to position L.A.’s delis comes down to their overall vibe and execution of the staples, the ontology of delis is considered thoroughly. Is, for example, the trendy spot Freedman’s, known for its unconventional take on Jewish cuisine, a deli? The Deli Boys determined it had a place in their hierarchy and, in fact, wound up going there on two separate occasions. But the decision to lean more inclusive with their delicatessenal standards wasn’t an easy one.

“It’s very much the question of the Jewish people in 2019,” Susser said about the decision to allow Freedman’s to be ranked. “Do you extend Judaism to all of these different sects. When does it bend so much that it breaks? This is not a conversation that started in 2019 — but Reform Judaism versus Orthodox Judaism: Do you welcome all or do you draw a line in the sand?”

“I think we’re purposely moving the line on our podcast to get to the main answer of what constitutes deli,” Phillips said. “Evan’s the East Coast Jew and I’m the West Coast Jew. So I think we feel pretty comfortable standing in for every Jew that exists.

“Currently and in the past,” Susser added with a laugh.

To their shock, Susser and Phillips have encountered pushback from Twitter for their opinions, notably the suggestion that poppy seed bagels should be done away with.

“Wouldn’t you believe it?” Phillips said. “Even our mothers are often disappointed in some of the things we claim to know and then learn we got wrong whether it be from our family history or Judaism in general.”

But while the podcast is running – and it will for the foreseeable future until the 14-plus delis are properly ranked or Carl Reiner or Mel Brooks agree to fulfill the “Golden Guest” spot and bring about the end of days for the show – Susser and Phillips are becoming more attuned to their Jewish roots.

“I stupidly didn’t realize how much more Jewish this was gonna make me,” Phillips said. “Maybe you can’t escape how Jewish you are and in engaging in any kind of venture your Jewishness is gonna pop up. Or it’s the fact that you start a venture called ‘Deli Boys’ that’s specifically focused on being super Jewish.”

But the project doesn’t stop with Susser and Phillips. In the pilot episode, the pair convinced a lapsed Jew to revisit his culture and, in the last show, a review of “The Nosh of Beverly Hills,” they inspired their goyische guest to seek out his own Jewish past.

“There’s nothing inherently Jewish about going to a deli and ordering a sandwich and leaving,” Susser said. “But every time we go, especially with a non-Jewish guest, they’ll have questions like ‘What’s this item on the menu?’ And the conversations end up being about Jewishness. So inadvertently we became Jewish folk heroes.”