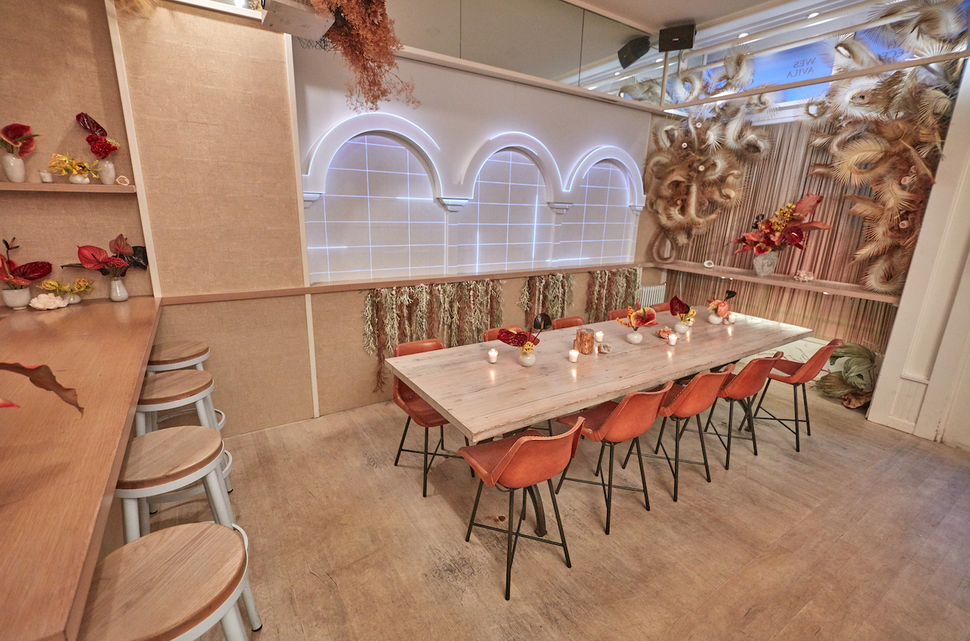 Kish Kash, Manhattan’s beloved couscous restaurant, is going on hiatus. But it’s for a good cause — Whirled Peas.

That’s the name of the first pop-up restaurant from Sabra, the hummus brand. Overseen by Kish Kash’s Israeli-born chef-owner, Einat Admony, Whirled Peas is spotlighting wildly inventive dishes by guest chefs where hummus is the star.

For each guest chef, Chef Admony is creating three small plates of her own – like tamarind cauliflower for Chef Tila’s hummusy Thai delicacies. The hummus at Whirled Peas is a special “premium” hummus Admony created exclusively for the pop-up.

Whirled Peas is officially open to the public! Our new pop-up restaurant is devoted to showcasing hummus as a delicious part of every culture’s cuisine. Each week we feature the menu of a chef that brings their own heritage and techniques to the table in a dining experience you won’t want to miss. Book your reservation now: Link in bio!

Admony, who consults to Sabra on hummus issues, admitted she was “a little worried” about how much hummus could work in such far-flung cuisine. “But I’ve been incredibly surprised,” she said. “It’s so exciting to share how totally different cultures can merge through extraordinary dishes.”

Sabra’s chief marketing officer, Jason Levine, agreed. “We really believe in the power of differences, especially cultural differences,” he told the Forward. “As we started to explore new approaches to hummus, people were pleasantly surprised. And it brought us to this interesting understanding, that unexpected and surprising things make your life more interesting.”

Behind the Whirled Peas pop-up is also a huge opportunity for Sabra, Levine said. “This category has a ton of potential, but it’s narrowly defined – people think of hummus primarily as a dip,” he said. “In other parts of the world, it’s a spread, a meal, the center of a plate. We wanted to show consumers what hummus can be, and also showcase it in more versatile ways.” Levine compared the emergence of hummus to the mainstreaming of foods like guacamole and cream cheese, “both of which have moved from narrowly defined usage to much broader consumption.”

But for chef Admony, whose latest Israeli cookbook, Shuk, was published last month, it’s all about flavors. “I love hummus,” she said. “It’s one of my favorite things in the world. I want people to eat more of it.”

Whirled Peas runs through November 24. No word on whether the Delaware band with the same name will make an appearance.