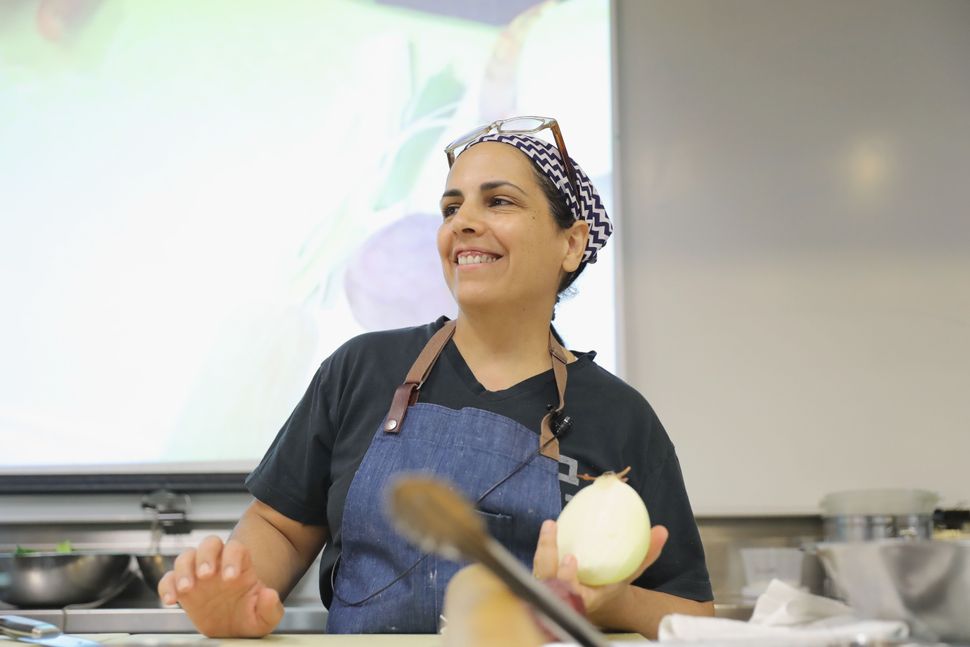 So much hype has trailed Kish-Kash – starting with a New York Times preview back in April 2017 – you might think the restaurant opened months ago.

But it was only Monday that star chef Einat Admony finally cut the ribbon on her newest restaurant, an Israeli-accented joint where Admony hopes to convert diners to “real couscous” from the boxed pablum she says they’re used to eating.

Admony’s the creative force behind game-changing restaurants like the late Balaboosta and the still-hot Bar Bolonat, so it’s no surprise that Kish-Kash has been packed in its first few days.

“People love it,” Admony told the Forward. “They’re really enjoying the food. We’re just tired.” On opening night, the restaurant sold out of 11 pounds of couscous – more than twice what Admony expects to use over three or four days.

The process behind Admony’s couscous is patience-testing and time-consuming. She’s rolling it by hand, and using the titular kishkash — a kind of sieve — in its production. The semolina she uses as a base gets hand-rolled, strained, and steamed; olive oil and salt soften and season the grains.

How will she manage to make such a labor-intensive dish in volume, several nights a week, we asked? “My guys here in the kitchen, I taught them. I’m calling them Moroccan mamas,” she laughed. “They’re rolling couscous like professionals. You need patience. It takes a long time. As for the volume, we’ll figure it out.”

Admony herself didn’t taste couscous until she was eight years old. “My mom never did couscous,” she said. “But my Doda Hana, my aunt, made the best couscous ever, and a lot of Libyan food. She was the inspiration behind a lot of Balaboosta.”

Kish-Kash’s menu serves up couscous in traditional guises, all bearing Admony’s distinctive stamp of vivid flavor profiles and lush textures. Along with a chicken tagine and slow-cooked lamb with dried fruit, the menu boasts mafrum – a meat-stuffed potato with tomato sauce — and the spicy fish dish called chrime. Among the starters: Her superb housemade hummus and a “shuk salad” of greens, avocado, and preserved lemon-date dressing.

For the first time at any of her restaurants, Admony’s offering glatt kosher meat, though there’s no kosher certification. “I don’t want rabbis here. And I also refuse to close for x days a year when I pay rent in New York City,” she said. “Kosher meat wasn’t a big leap because I was already using high-quality meat, and kosher meat wasn’t much more expensive.”

Next up for Admony: Finding a new home for Balaboosta, which shuttered after its lease lapsed. In the meantime, she’s still involved in quick-service eatery Taim – “though it’s pretty much self-operating at this point” — and Bar Bolonat, which continues to fill tables nightly. “I have two businesses three blocks from each other,” she laughed. “It’s not bad.”