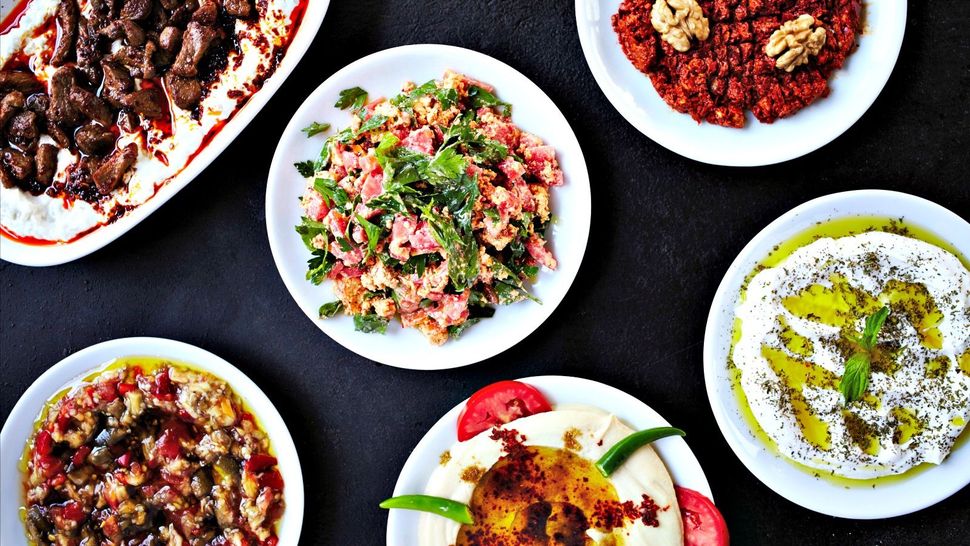 Here are the nominees for the Forward Food Choice Award for best new Israeli/Middle Eastern restaurant. Learn more about the awards and vote for your favorites here.

Tuvia Feldman’s Upper West Side spot charms with a straight-up Mediterranean menu — no fusion experiments here, just delicious stalwarts like grilled cauliflower, beef kofta and the delicate stuffed pastry called Moroccan cigars. The wheel does not get reinvented, but that’s not Bustan’s point; it’s a chance to savor comfort food produced by a careful kitchen that knows its way around seasonings and sauces — the anise honey on the cauliflower, say, or pomegranate sauce on beef kofta. The Turkish sundae, with shredded halvah and crisped rice, is a treat.

For New Yorkers, a rare case of restaurant envy finally ended when superchef Michael Solomonov opened a branch of his Philly hummusiya in Manhattan’s Chelsea Market last May. An offshoot of Solomonov’s revered Zahav, Dizengoff slings superb hummus and a rotating selection of salatim, delicious Israeli salads. They work beautifully on pita made in a wood-burning oven in-house. It’s casual, fairly priced, and addictive – just ask us.

We refuse to believe there’s just one Meir Adoni. How does he run this revelatory new Israeli restaurant in New York’s Flatiron neighborhood, and still oversee the acclaimed Blue Sky and Lumina in Tel Aviv? Adoni has said that he’s “let loose” at Nur; the result is wild plates like date doughnuts with smoked trout, smoked eggplant carpaccio with dates, and an insane foie gras “parfait” with rose water gelee and challah toasts. Desserts crank it up further — the “Hills of Jerusalem” mashes up chocolate, halvah, crispy artichokes, pistachio cream and smoked yogurt ice cream. Whew.

USA Today’s surprise “best new restaurant” in 2015, Timna’s still going strong, with Chef Nir Mesika sharing a very personal vision of Middle Eastern cuisine. On the plate, that might translate as tuna “sashimi” with tzatziki, Bedouin octopus with hummus and eggplant or Moroccan duck breast with farro stew. Dessert might be his grandmother’s basbousa semolina cake with vanilla ice cream and shredded halvah. Mesika’s also not shy about using his menu to make statements; one cocktail’s called “Peace In The Middle East”. His cooking’s a great start.