Now Gingerbread? These Flavored Hummuses Are Getting Out of Hand 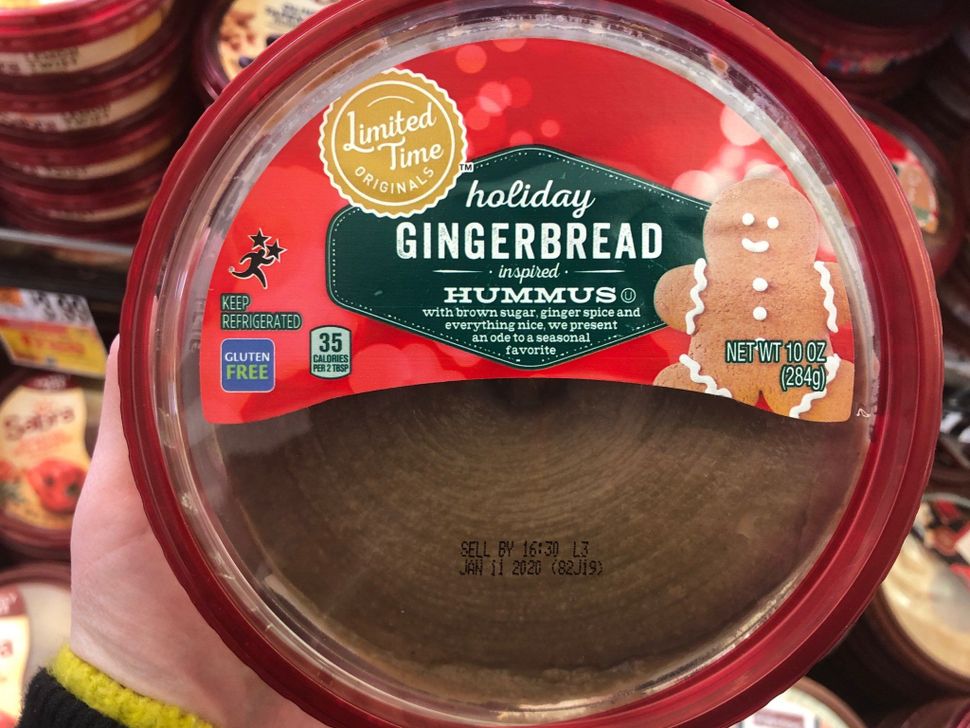 But gingerbread hummus, unleashed on the world this month by a brand called Limited Time Originals, may have pushed us over the edge.

“It’s an abomination,” thundered the UK Independent. “It is causing people to vomit.”

“This year’s contender for worst product,” lamented another UK site, The Poke.

First, the Forward reached out to some Israeli-food gurus for their own thoughts.

“I want to try it and it makes me sad. But I will try it! And I will hate it! And yet… I’ll continue to eat it — voraciously! Whilst staring at myself in the mirror, tears streaming down my face and On My Own – the track from Les Miserables – playing loudly in the background,” said Michael Solomonov, the James Beard Award-winning chef behind Philadelphia institutions like Dizengoff, Zahav and Abe Fisher (and a 2019 Forward “Taking the Lead” gala honoree).

“These flavored hummuses are getting ridiculous. The FDA should be establishing guidelines for what should be allowed to be called hummus with mandatory minimum prison sentences attached upon a violation of the guidelines. Just kidding of course, but I don’t think that gingerbread flavored hummus is doing any good for chefs who are working to bring true Middle Eastern cuisine into mainstream dining. Hummus tastes best when sticking to simple, quality ingredients.”

The Twitterverse was equally enthusiastic. “I call on all Jews, Arabs, Kurds, Persians and other peoples of the Middle East to unite and protest this assault on our shared culinary heritage,” wrote Jerusalem-based author (and Forward contributor) Sam Sokol, tongue presumably in cheek.

This is an abomination before God and man and should be condemned in the harshest terms possible. I call on all Jews, Arabs, Kurds, Persians and other peoples of the Middle East to unite and protest this assault on our shared culinary heritage ? https://t.co/aXCxFE79Qs

“I’m pretty sure God is against this,” opined a user named Unvirtuous Abbey.

Hannah Godofsky: “Whenever Starbucks eliminates a latte, it comes back as hummus in the next life.”

The Forward reached out to Hannaford, the supermarket chain that produces the hummus, but didn’t receive comment by press time.

Perhaps drawing on her experience covering foreign affairs, MacKinnon is riding the hummus controversy with aplomb. “I was surprised by the reaction,” MacKinnon told the Forward in an e-mail. “As we have just survived the season of pumpkin spice, I figured people would be over this kind of thing by now, but I guess not.”

After our email exchange, MacKinnon tweeted: “Reader, I have just been contacted for comment on the gingerbread hummus. What a time to be alive.”

Now Gingerbread? These Flavored Hummuses Are Getting Out of Hand