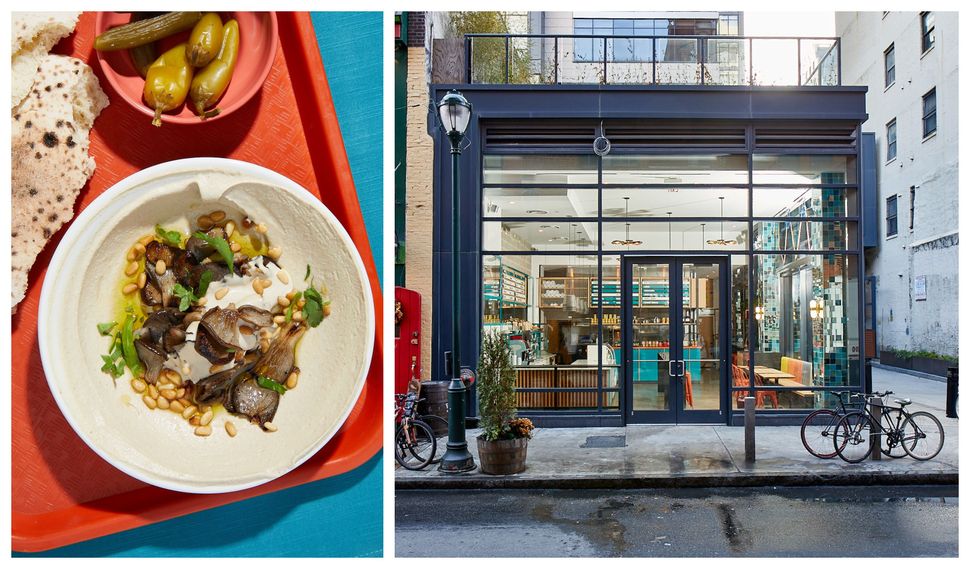 It’s about 5,740 miles from Sansom Street in Philadelphia to central Tel Aviv.

But that distance got a little shorter this week with the opening of Merkaz, the latest celebration of Israeli food from James Beard Award-winning chef Michael Solomonov and business partner Steve Cook.

“The Savidor Merkaz is Tel Aviv’s transit hub – it’s the place that physically connects the people and neighborhoods of the city,” Cook said in a press release. “By bringing Merkaz to Midtown Village, in the center of the city, we’re hoping to capture that same energy. We’re doubling down on Philly.” Solomonov has joked that the pair is building their own “Israeli village” in Philadelphia; Merkaz is their 14th restaurant there.

On the menu at this street-food spot, whose name means “center” in Hebrew: Solomonov’s signature hummus, warm pita sandwiches, and salatim – cooked vegetable salads that often include anything from stewed eggplant to tabouleh to cucumber salad. In the kitchen is Henry Morgan, the longtime chef of CooknSolo hummus hotspot Dizengoff.

One of Merkaz’s showpieces is the sabich, the Israeli sandwich based on a traditional Iraqi shabbat dish. Here, it’s “a combination of crispy eggplant with a slow-cooked creamy egg, topped with the trio that’s always on-hand in an Israeli kitchen: tehina, amba (Iraqi pickled mango sauce) and chopped salad,” according to a press release.

“All it takes to understand the magic of sabich or schnitzel is eating one while standing on a street corner in Tel Aviv. It’s those moments that make us want to keep this Israeli street food movement going in Philly,” Solomonov said in a statement.

An all-day spot, Merkaz will dish up breakfast items like hummus foul, warm hummus with stewed fava beans and egg; egg in pita with labneh; and shakshuka. Lunch and dinner will feature whole Yemenite cauliflower and to-go chicken dinners along with those sandwiches and salads. To wash it all down, Merkaz is making its own varieties of gazoz, the Israeli soft drinks, in flavors like lemon cardamom, hibiscus grapefruit, and celery coriander.

Last week, Solomonov received the Forward’s Regina Frishwasser Award at a gala benefit event, Taking the Lead: A Celebration of the Forward’s Future.