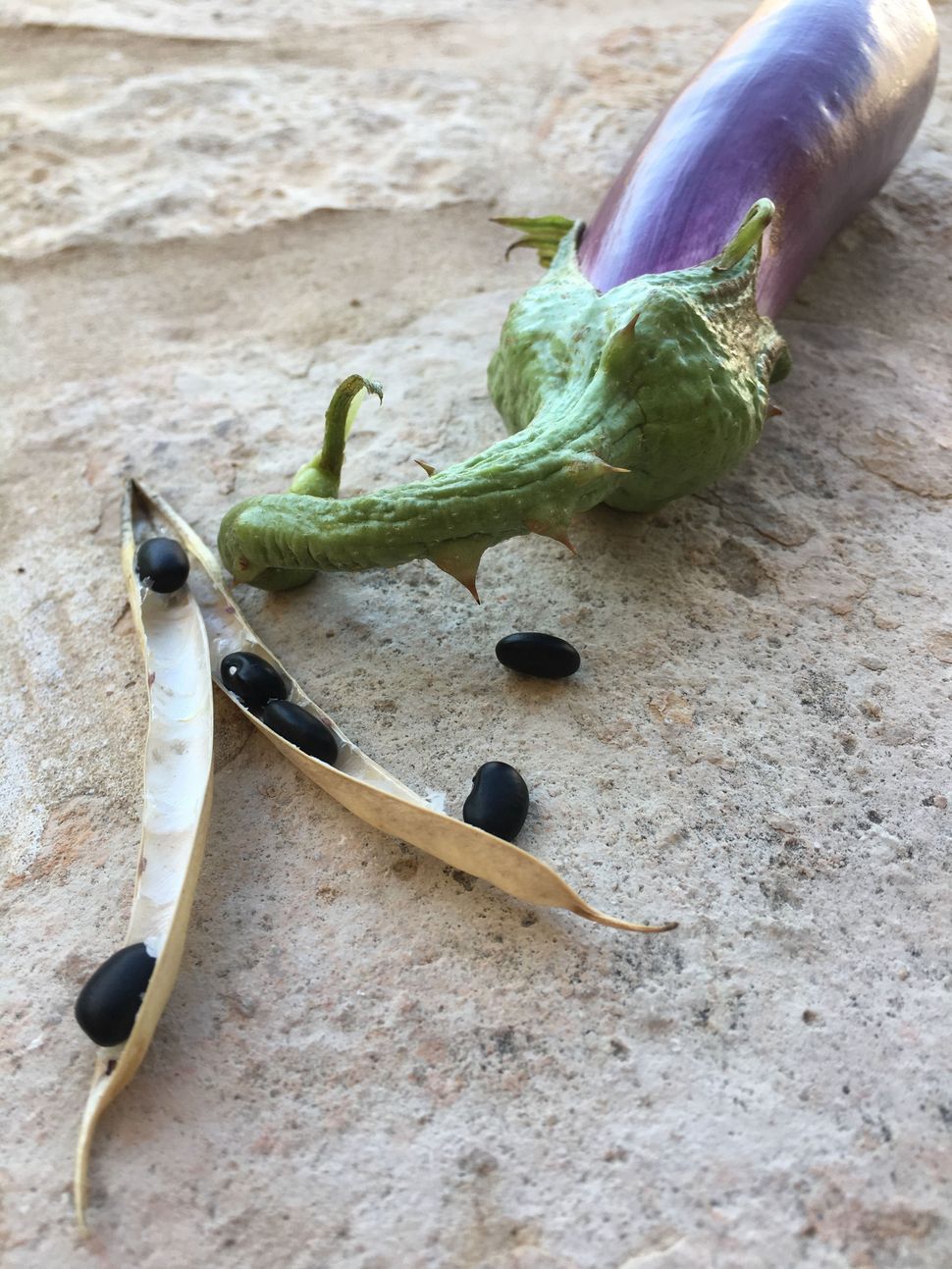 (Ed. Note: The Forward is delighted to welcome Vivien Sansour as a regular food columnist. You can read more about Vivien here)

The flowers on my eggplants are getting full.

I had never taken much notice of how the eggplant flower suddenly transforms into a heavy shell that produces a perfectly purple vegetable, but in the past few weeks I have been able to sit still and watch this progression on a daily basis. 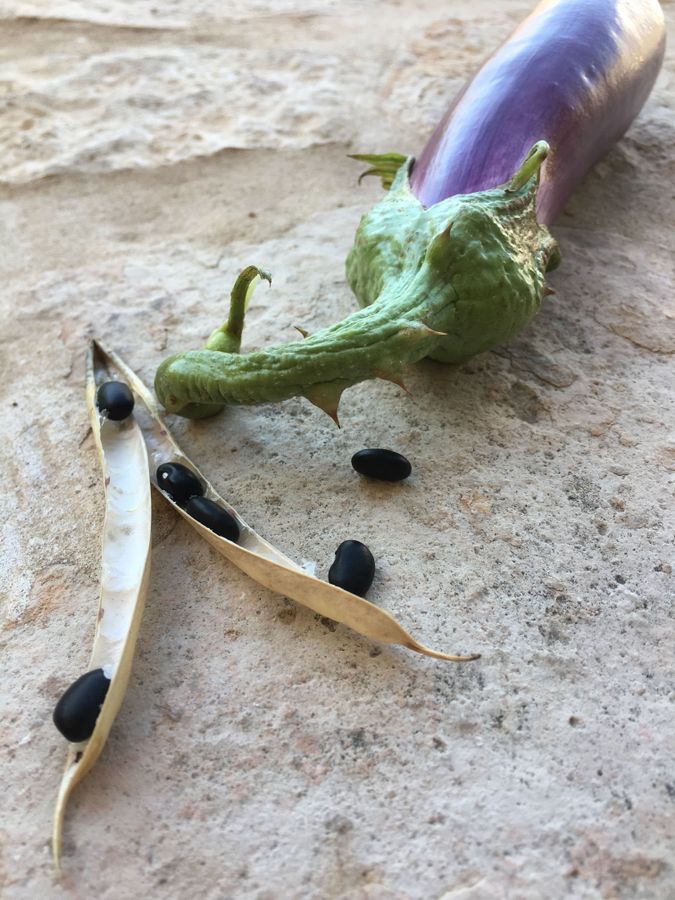 Though most people refer to the eggplant as a vegetable it is, apparently, a fruit, a kind of berry, with myths and stories around its different varieties spanning from being a beloved fruit to one that is spell-inducing.

But why bitinjan (Arabic for eggplant) became an intriguing vegetable for me has nothing to do with its tasty flesh and more with my fascination with its thorny crowns, particularly the ones that floated in my mother’s lamb stew at the end of summer. Thorny and tender at the same time, these uniquely tasty eggplants hail from the village of Battir and are thus referred to in Palestine as Bitinjan Battiri.

This meaty berry made its name traveling around the country by car, bus, foot, and most importantly by train. The train that still runs through Battir today is part of the ancient silk route, and up until 1948 when the station was destroyed, the village had its own stop where women carried the purple fruits in baskets and sold them directly to voyagers who would pause in the Battir Valley.

From the terraces to the tracks, Battir’s bitinjan also became popular throughout the region for its sweet flavor and its perfectly elongated shape that made stuffing it with rice and meat easy– and God knows Arabs love to stuff their vegetables. Even as Palestinians we became subjects who could no longer move or travel freely, the bitinjan continued to roam the country, and in some cases the world, with its seeds becoming coveted and sought after amongst diaspora communities and food lovers alike. 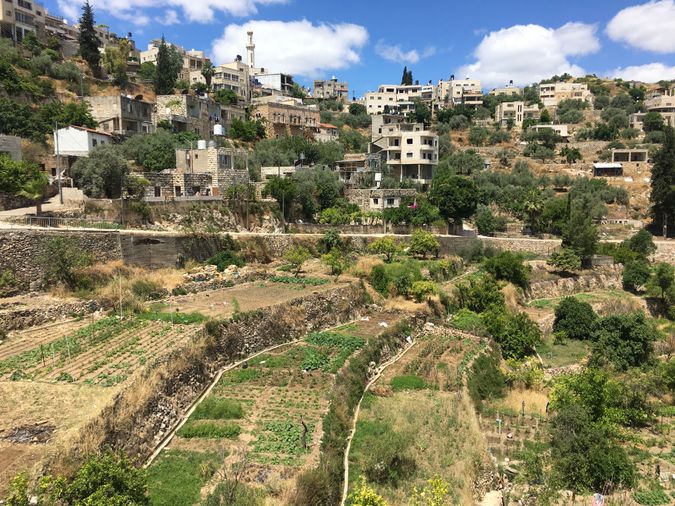 I have always been jealous of the battiri’s worldwide travel, which led me to follow its footsteps when the world was finally opened to me. I was full of lust for life- and a glutton for adventure– and though I thought I had cured my gluttony with endless travels over the last decade, I found myself these past few weeks again envying the very same plant.

I was watering the eggplants I have been growing in my garden. It was hot, and I was sweating. I felt that I wanted to develop fins that could help me swim in the shallow irrigation water. I tried to beat back the fantasy over and over again as I splashed my face the first time and the second time, but by the third time, I surrendered to the illusion. Suddenly there were no checkpoints or military outposts that limited my movement, and I was deep in the Mediterranean, and though the water gushing out of the hose lacked salt, my skin managed to pretend that the dirt on my feet was sufficient.

“Drown them!” my friend Hassan, who has been my partner in many of my agricultural activities, yelled from across the garden, interrupting my reverie. Annoyed by my lack of attention to the task at hand, he said: “They must get their fill or else they will die.”
In that moment, I wondered how Hassan satisfies his need for freedom, occupied with the eggplant’s thirst and too accustomed to his own. No woman, man, or child should ever miss water that much, and no bird should ever be forced to drop their wings for a sip of water.

Sometimes there are no answers to such questions. They require a more complex understanding of a reality that renders some people more privileged than others, and allows space for the wounded to wound another.

But I have found my safe space in the kitchen– the knives take on a different role, one that is benign despite their sharp edges– and the vegetables forget where they came from.

And so I start a process of transformation in myself and in the newly picked eggplant that preceded its sisters and developed a fat belly. I take it out of the oven after it has been roasting in high heat on silver foil and I lay it on the cutting board, and with one of the sharpest knives in my kitchen, I break her belly open. She does not object- quite the contrary she expands allowing me to stuff parsley, garlic, mint, thyme, salt and hot pepper straight into her heart.

By this point, we have both forgotten where we come from, and as kitchen therapy always does, the outside world ceased to exist as well–until the moment I had to create the sauce.

It was made with tahini from Nablus, a city that has excelled in transforming sesame seeds from the planes of the northern West Bank into a delightful liquidy butter. And so here I was failing to escape from the reality I was disciplining myself to become uninterested in. Marj Bin Amer, the biggest valley in Palestine, had been the source of our heirloom sesame seeds that were crushed in stone and made into a delicious liquid.

“We are planting poison instead of food,”the words of Abu Mohammed, a sesame farmer I knew in a village outside of Nablus, echoed in my head. A few days before he died he took me down to his sesame field and showed me for the first time how to rattle the dried sesame plant to collect the seeds. He was happy to be accompanied by a young woman who was interested in his disappearing crop, but he was also enraged at the sea of tobacco that had filled the valley.

“Farmers are now forced to do things they never wanted to do in order to survive,” he said.

My eyes gazed across the golden sesame tops and ahead to the ocean of tobacco that had taken over the land. I understand the web of complexities that make the prisoner a slave to the prison guard. How oppression does not have to be represented in the demolition of a house or the imprisonment of a body, rather its worse forms take place in the conquering of the hearts of people who once loved their villages and grains and now have to accept the lie that who they are is not good enough.

But, it was not time to contemplate these questions. I had to make sure my eggplant dish was ready before my dinner guests arrived. I closed the bottle of tahini well as I shook it in a bit of an aggressive movement before I opened the lid and poured a healthy portion in a bowl. After sprinkling in a bit of salt and adding some water and lemon juice, I declared my triumph. The taste, temperature, and time was now perfect to bathe the cooked eggplant with history in the shape of crushed seeds made into sauce. And so I completed the process of presenting a meal that is both warm and tender.

That night I watched my friends devour the very being I envied for so long. But as they were munching and dipping bread in the sauce my envy subsided. I realized in that moment that my jealousy was only grief misdirected. How can a plant have more freedom than my own feet? But that very eggplant who so generously offered her flesh was also familiar with the sesame seeds I love so much.

I couldn’t help but wonder if the reason for that familiarity came from the fact that the three of us were part of the same terrain that has endured so much pain and extracted an extraordinary amount of beauty at the same time. This pain and this beauty that were becoming part of my friends and my own being was our heritage laid on a plate. And it suddenly dawned on me, as we were eating our history, that we were engaging in the greatest revolution of all, because with each bite we took, we were dispelling the lie that who we are was not good enough. We were falling in love with ourselves : A people, persevering, and much like the eggplant, generous, even in the direst of times.

Vivien Sansour is an artist and conservationist. She is the founder of The Palestine Heirloom Seed Library and the Traveling Kitchen project, both initiatives aim to bring seed heritage back to the dinner table so we can, “eat our history rather than store it away as a relic of the past”.