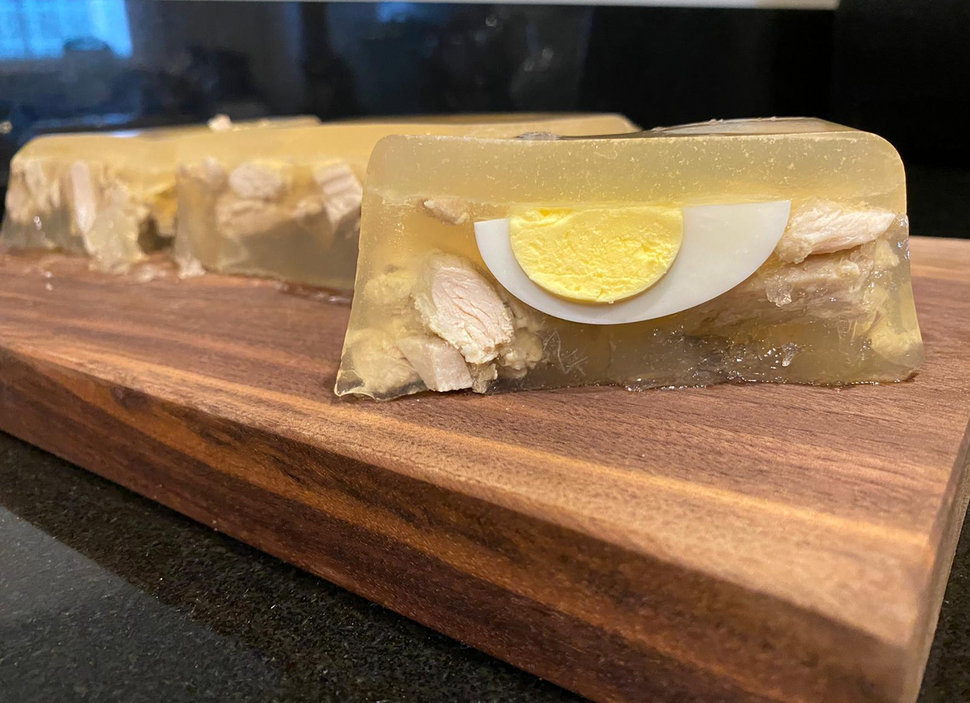 P’tcha Image by Ala' Khan

In the midst of what was an unbearable heat wave in Los Angeles, I was struggling to figure what to eat that’s not just refreshing and cooling, but also interesting and nourishing.

P’tcha can go by many names depending on your particular orientation — kholodets, studen, galarita, aspic — but at its heart, it’s a deeply nourishing millennial-approved bone broth chilled and set, often with visually striking elements like hard-boiled eggs and shredded meat floating in its translucent amber jelly.

Its roots are in Eastern Europe, particularly among Ashkenazi communities where the ability to turn cheap, seemingly useless cuts of meat into spectacular Sabbath showstoppers was especially in demand.

Today, the food world’s emphasis on technique, tradition, and the excavation of forgotten tastes has given p’tcha a kind of rebirth.

So when the multi-faith social incubator I live in, Abrahamic House, decided to host a virtual food memory potluck, I could think of nothing better to bring than p’tcha.

Not that I had any particular food memories associated with calves’ foot jelly, beyond what I was making for myself this summer. I’m not Jewish. The Jell-O salads I grew up seeing were at church parking lot potlucks. They were sweet and fruity, resembling more a patriotic arts and crafts project than a nutritious, wholesome food.

Indeed, I believe the mid-century manufacturers of powdered gelatin desserts, and particularly those charged with marketing them, committed a crime against gelatin. Think of the last time you made a midnight snack of last night’s roast chicken—embedded in its own chilled, naturally gelatinous juices. A saccharin-sweet fruit salad is not gelatin’s first best use.

On the contrary, gelatin is a protein that comes from simmering bones, especially bones with a lot of skin, marrow, ligaments and tendons, long enough—at least four hours— that they give up their age-defying collagen. Add a splash of vinegar to help extract all those healthy minerals, and you’ve got bone broth, a Zoomer’s penicillin.

Any number of kinds of bones can achieve this result. But in Abrahamic House, where a Christian (me), a Jew, a Muslim and a Baha’i all live and cook together, pork and beef are not an option. I’ve opted to use chicken feet as the base of my p’tcha, which might not be traditional, but does feel more accessible to both cook and consumer.

Chicken feet are remarkably affordable, only a dollar or two a pound, and chock-full of the gnarly bits that make for a stellar bone broth. Most of the time you can find them already prepared with the outer yellow skin removed, but you can do that easily enough yourself if you need by briefly blanching and peeling. Some prefer to cut off the nails at the first joint, but doing so is purely an aesthetic choice. If you don’t mind looking into a pot filled with what look like tiny elegantly manicured fingers (and I can understand why you might), the extra work’s unnecessary.

I’ll admit leaving a pot of bones to boil for the better part of a day isn’t the most appealing hot-weather activity, but it doesn’t require a great deal of attention. You could also just as effectively bring everything to a boil in a slow cooker and continue cooking on low overnight or speed the process up with an electric pressure cooker.

Now that p’tcha’s entered my life, hardly a week goes by there’s not a meat jelly in my fridge. It makes for a perfect simple snack, light lunch or surprising side and is infinitely variable.

While shopping for chicken feet at a Korean grocery, I also picked up some ginger and lemongrass for a totally different flavor profile. And, the other day at the halal butcher I noticed some goat legs with lots of gnarly tendons that I’m thinking will make a great broth of another kind someday.

It’s this reclamation of underused ingredients, simple but surprising techniques and uncommon textures that I think I find most inspiring about p’tcha and its relatives. And, if I’m being totally honest, straddling the line between delicious and disgusting also appeals.

It could be argued this recipe has more in common with an aspic of the French tradition than a traditional shtetl p’tcha, but I encourage you to take this basic technique and experiment to explore your own preferences and traditions, as I have done. If you can find calves’ feet and are comfortable working with them they’re certainly the more traditional choice. Just keep the proportions more or less the same. You can adapt cooking times for a slow cooker or electric pressure cooker, if you like, and invent new flavor combinations, as you’re inspired.

For the “float”:
2 egg whites
The shells of 2 eggs, crushed
Splash of water

Bring the chicken feet, peppercorns, and vinegar to a boil and then reduce to a simmer for at least four hours.. Skim off any foam that rises to the surface. Add more water as required. Maintain a gentle simmer, as a vigorous boil will destabilize the naturally occurring gelatin.

In the last hour or so of cooking, add the chicken thighs, onion, carrot, salt, bay leaves and/or any other aromatics you like.

You’ll know the broth is done when the feet are visibly breaking apart and the liquid has a milky appearance. At this point, remove and discard the chicken feet and vegetables. Coarsely chop the chicken thighs.

To clarify the broth, make a “float” by combining the egg whites and crushed egg shells with a splash of water. Stir into the warm broth and bring to a boil, continuing to stir. It will appear to be getting worse, but cnce the egg mixture has risen to the top in more or less a solid “float” strain through a double layer of cheese cloth. You should have about two quarts. Check seasoning. It should be saltier than you might ordinarily think as cold food requires more seasoning.

Pour ⅛-inch of the broth into a rectangular mold, terrine, or baking dish and chill to set.

Once set, place the egg halves cut side down and evenly distribute the coarsely chopped chicken thighs. Pour over the remaining broth and chill for four to six hours, or until firmly set.

When ready to serve, dip the mold in hot water for a few seconds and run a knife around the edge. Turn a serving platter over top of the mold, reverse, and give a sharp jerk to release.

Cut into slices and serve with horseradish or mustard.

Jonathan Simcosky is an Abrahamic House Fellow in Los Angeles.