A different doughnut for each Hanukkah night 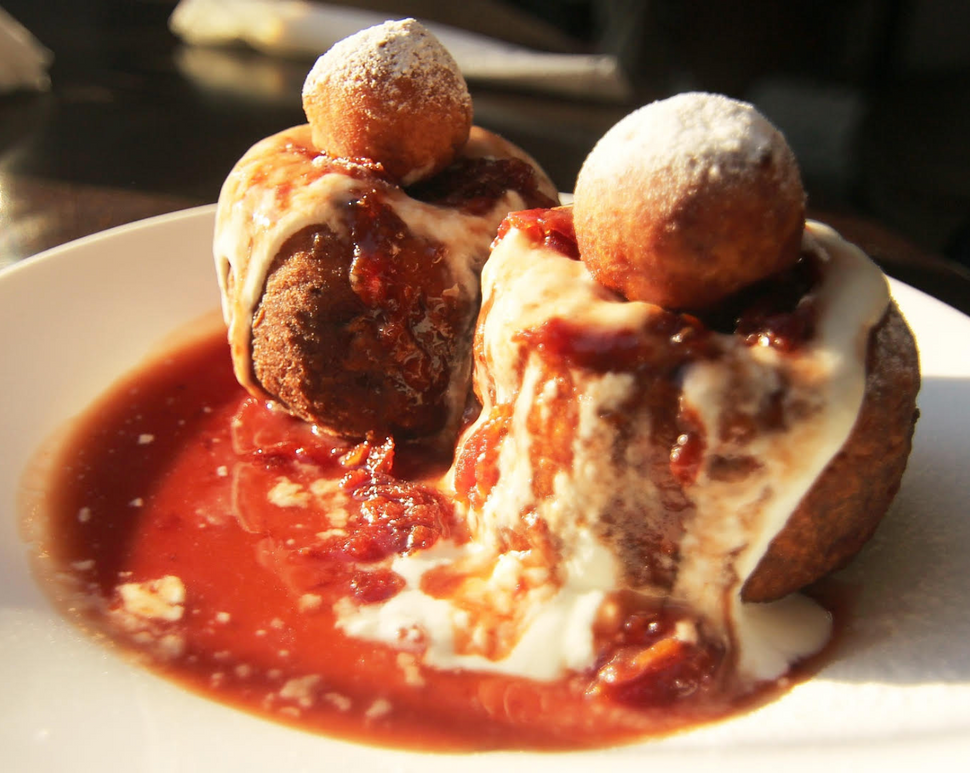 As soon as the Israeli Hanukkah doughnuts start appearing in bakeries at the beginning of the Hebrew month of Kislev, weeks before the festival, Kent launches into his tastings. He samples the gamut, from the ubiquitous red jelly-filled to the decadent halva or dulce de leche-flavored, at gas stations or at high end patisseries.

“I never eat an entire donut” he wrote via e-mail. By the time Hanukkah actually starts, he’s done with doughnuts and has latched on to latkes.

Of course, each oily food in Kent’s annual routine is a traditional Chanuka treat among Jewish communities around the world. The oil used to fry each dish recalls the miracle of the oil lasting in the rededicated Jerusalem Temple in the second century BCE.

The modern Hebrew word, sufganiyah, initially referred to foods that soaked up oil like a sponge, including latkes and doughnuts, based on the ancient Hebrew word for a type of sponge cake, (sufgan). Eventually sufganiyah came to refer to doughnuts only. Jelly- filled doughnuts probably made aliyah with Jews from Poland (pączki) and ultimately embedded in Israel’s palate through the Histradrut labor union’s advocacy for professional bakers in the 1920’s.

Around the world, Jewish communities have commemorated Hanukkah with variously named, regionally- influenced, often yeast- risen fried doughs, usually dairy and egg- free, as well as homemade fried doughs topped with honey, rose water, or orange water syrups. Their Muslim and Christian neighbors also enjoyed them at Ramadan and Christmas. Easily prepared, they may appear again at Purim or be adapted for Passover. Why not?

These recipes for each night of the festival, with distinctive shapes and flavorings, highlight Jewish diversity through time and place. 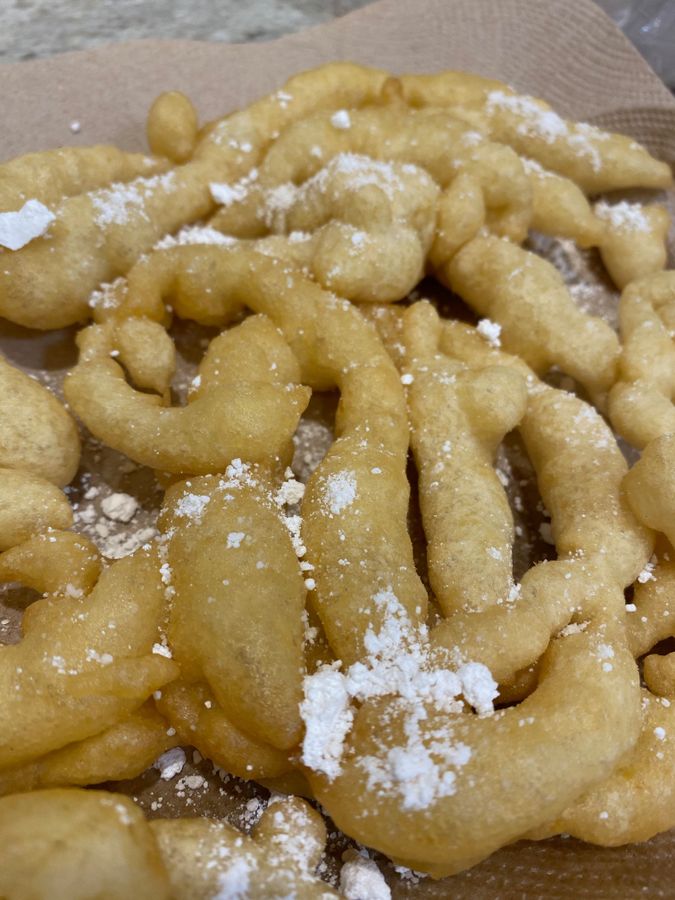 A drawing in the tomb of Ramses III from approximately 1200 BCE illustrates two cooks deep frying spiral shaped dough resulting in, according to some, today’s zalabia. These spirals, coils or free-form doughs, traditional for Hanukkah, pervade Egypt, India, Iran, Iraq, Kurdistan, and Turkey. Sometimes the syrup or the dough is dyed a bright orange, yellow, or red. Kurds serve them at Tu B’Shvat as well. 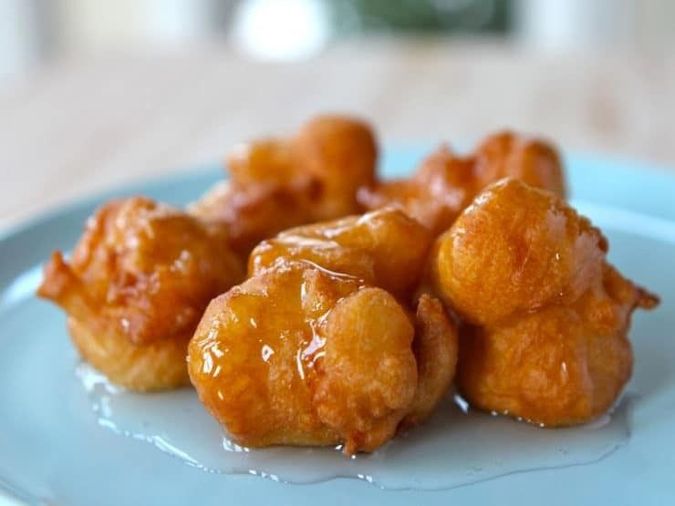 Fried dough balls, popular throughout the Middle East, may have roots in ancient Greece. Some say this oldest recorded dessert was served to Greek Olympic victors in 776 BCE, covered in honey, topped with sesame seeds. Greek Jews or Romaniote (Jews in Eastern Mediterranean since at least 3rd century BCE, preceding Sephardim to Greece) call them zvingoi or zvingous, the bread eaten by the Maccabees.

Later Sephardi culinary tradition yields a similar fried dough ball, called bimuelos. After 1492 converso, or secretly Jewish, families continued to make them in December, though they had forgotten why. By 1547 the word bimuelos appears in Ladino (Judeo-Spanish) bibles (Numbers 11:8). A 17th century traveler in the Ottoman Empire, Evliya Celebi, recorded seeing Jews frying them in oil while their neighbors used butter or lard.

The Danish Christmas treat, aebleskiver, seems to be a similar treat of adaptation. Indeed, the Danish-born mother of Uri Scheft (Lechamim Bakery, Tel Aviv, and former co-owner of Breads Bakery, NYC) makes them for Hanukkah in Israel. These cardamom-flavored pancake balls with apple are served with jam. As with bumuelos, there’s even a specially designed pan to maintain the shape of the balls (though the pan is not required). 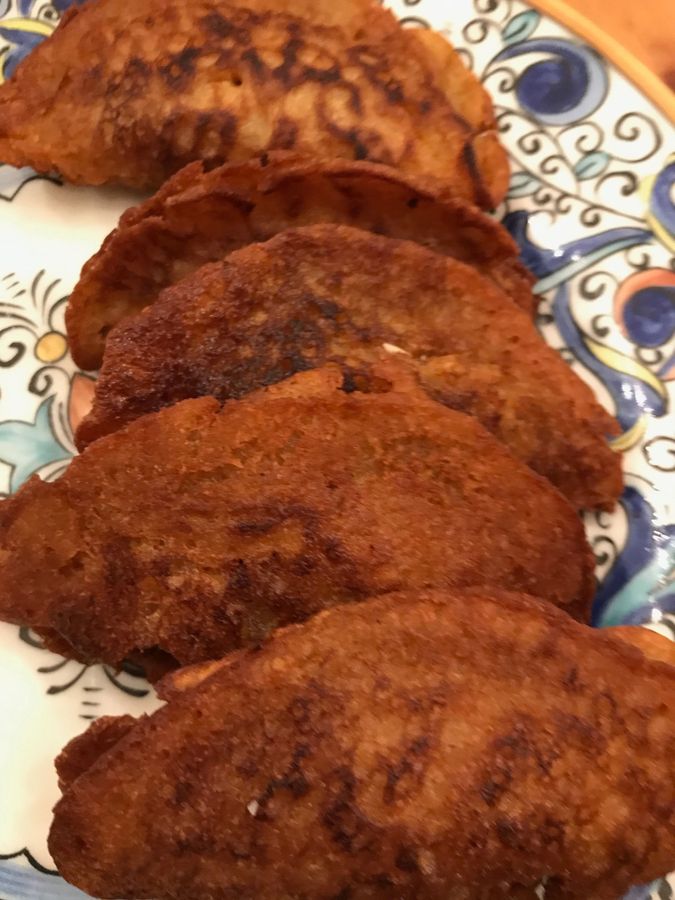 These double-fried, crescent-shaped, filled pancakes have roots with 9th century chefs to the Caliph of Baghdad. Jews in the Middle East have enjoyed them since at least the 10th century when Rabbi Saadia Gaon explained an unusual biblical Hebrew word as atayef. He noted that his neighboring Muslims enjoyed it at Ramadan, in his Arabic translation of the Torah (tzapihit, Exodus 16:31). Gil Marks, author of The Encyclopedia of Jewish Food notes that atayef were so popular among Egyptian Jews that Ibn al-Qata’if, meaning son of the pancake maker, became a popular name. Food writer, Claudia Roden, calls them “one of my favorite Arab sweets.” 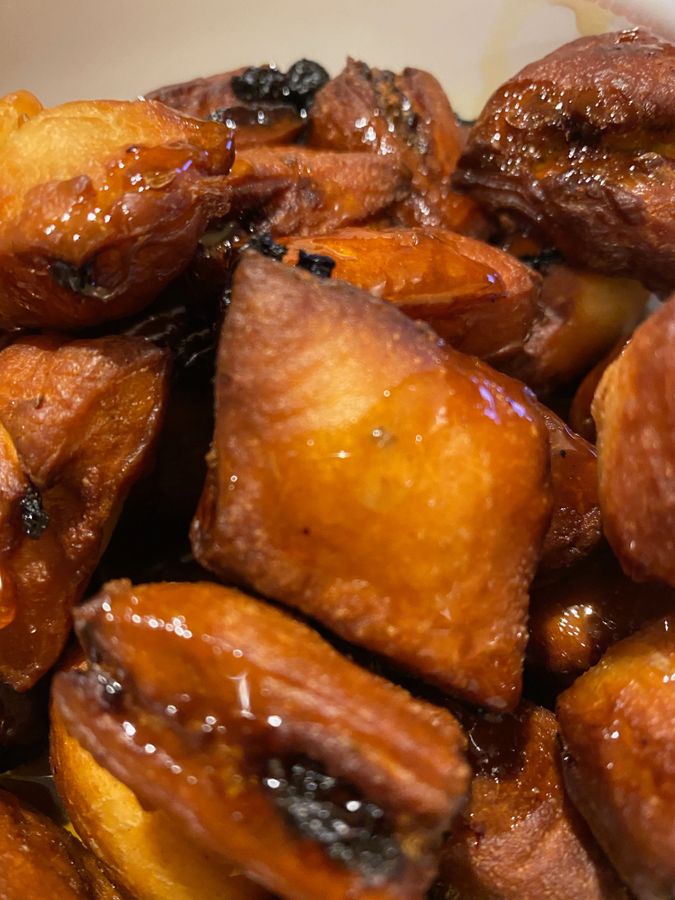 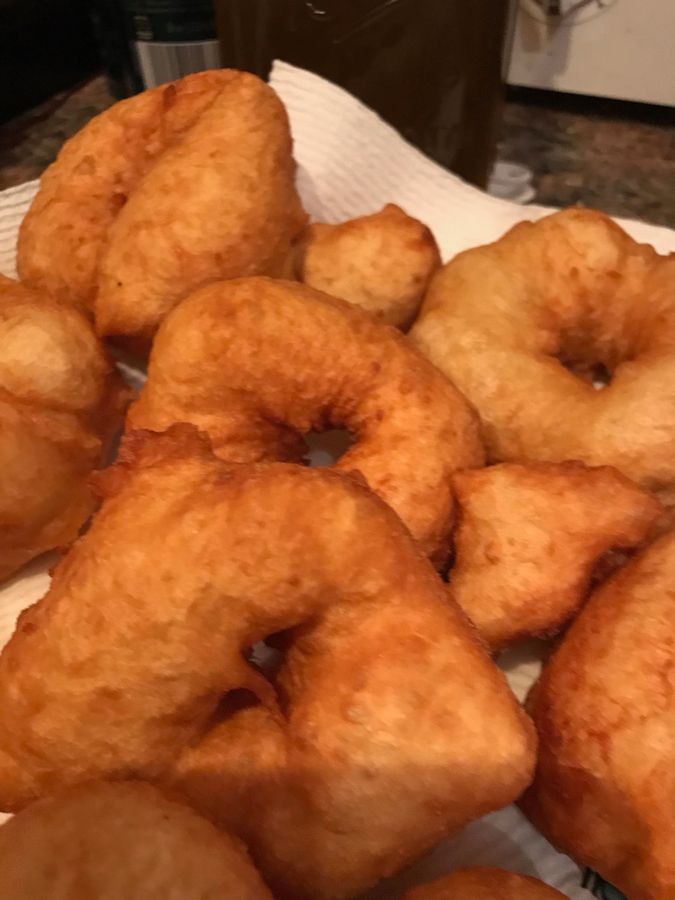 Jews from Morocco brought sfenj to Israel. The popular, lifesaver-shaped fried dough, gathered in bunches with a rope or palm leaf, may have first appeared in the 8th century. They are eaten at breakfast and afternoon tea. Neighborhoods would often feature sfenj bakers frying their goods on a central, raised platform. 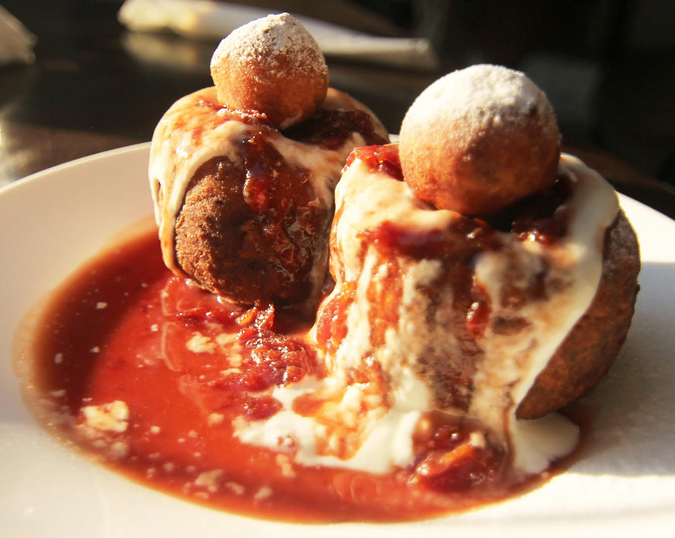 This stunning Romanian treat cuts out the center of its cheesy dough to fry the tube and the center separately. Later, berry-topped cheese or yogurt fills the hole, and the fried middle crowns that. Romanian Jews, who introduced this to Israel and to America, also enjoy them at Shavuot. 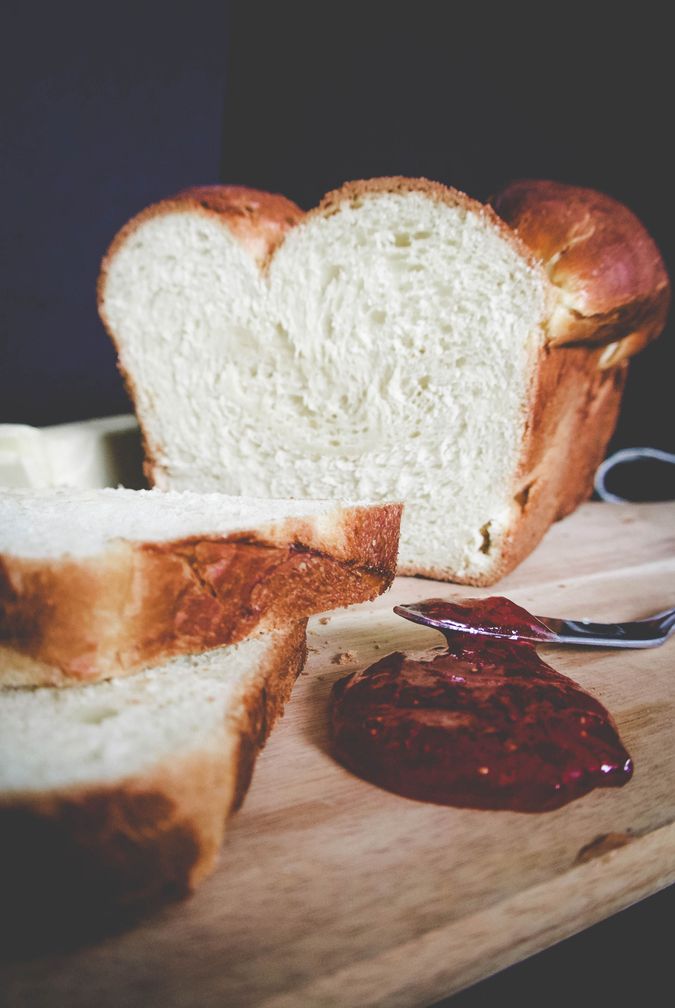 It is certainly possible to make fancy sufganiyot at home. However, skip back to the origins of a fried, filled dough, for two simpler approaches. One version slathers jam between two slices of bread (leftover challah?) and fries that. Or, make a doughnut dough, cut it into rounds or squares, fill two rounds with jam, and fry those.

1. Use a deep pot, a Dutch oven or a wok for the frying.
2. A tall candy thermometer helps track the heat of the oil, which generally works best at 375º.
3. Use an oil with a high smoke point and neutral taste, such as refined peanut oil, canola, safflower, sunflower, grape seed, cottonseed, corn, or soybean.
4. Before serving and adding toppings, drain the doughnuts on paper towels.
5. Any recipe with liquor helps to minimize absorption of oil.
6. I like to serve the topping separately to allow guests to sweeten to taste.

Rabbi Deborah R. Prinz lectures about chocolate and Judaism around the world based on her book, “On the Chocolate Trail: A Delicious Adventure Connecting Jews, Religions, History, Travel, Rituals and Recipes to the Magic of Cacao” (Jewish Lights). She co-curated the exhibit “Semi[te] Sweet: On Jews and Chocolate” for Temple Emanu-El’s Herbert and Eileen Bernard Museum, New York City.

A different doughnut for each Hanukkah night