The secret to legendary latkes 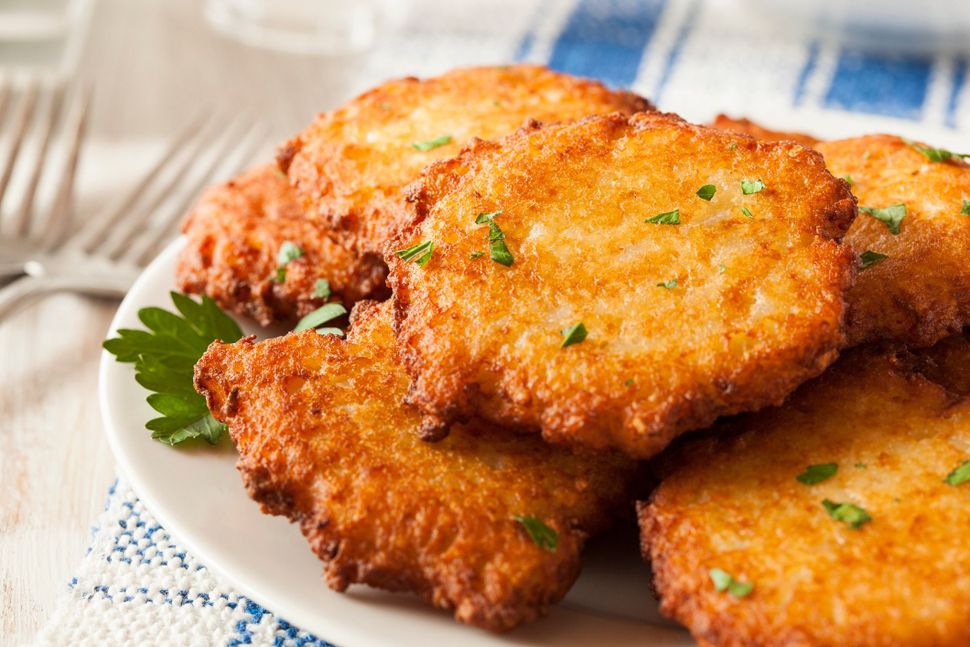 You want latkes that are crisp, light and just the right amount of oily? Here’s the secret ingredient:

It’s not white flour, or matzo meal or grated sweet potato or peanut oil. It’s not any of the stuff too many latke-makers add to their mix that end up making their latkes thicker, gummier and heavier. This is a much more clever secret, that I will share.

OK, here it is: potatoes.

The basic latke ingredients are potatoes, onions, eggs, salt and pepper and oil for frying. Many recipes add binders — tapioca starch, flour, rice flour, potato flour — to pull everything together. I find those extra ingredients gum up the works, and adulterate the pure flavor.

My recipe uses two techniques. One rids the batter of excessive moisture, the other helps bind the ingredients. The latkes that result and light, just a little plump in the center, with a corona (pardon the expression) of crisp potato shards.

The first technique is wringing the grated potato and onion inside a tea towel. This expels all excess moisture. You do this over a bowl, and save every drop of murky liquid.

Then you let the liquid settle.

Technique #2 is key: After the liquid has settled— it takes just a few minutes, while you heat oil in a heavy skillet — carefully pour off the liquid then scoop out the potato starch that remains at the bottom of the bowl. You’ll end up with at least a tablespoon, maybe more. Now, stir that back into your mixture, and start forming your latkes.

Simple, right? Make sure you start with starchy potatoes, like Russets, and you’ll have plenty of natural starch to add back to your latkes.

If you have friends in the kitchen, or kids, let them do the honors of adding the starch. It’s fun to squish the stuff between your fingers. It’s a bit of a food miracle, a reminder that so very often, everything we need is already at hand.

(Want to make these latkes with me on Sunday, Dec. 13? Click here or see below.)

Directions
1. Pour the oil in a heavy frying pan and place on stove.

2. Grate the potatoes and onion onto a large clean kitchen towel. (You can also do this on the shredding blade of a food processor)

3. Gather up the corners of the towel and twist the potato/onion over a large bowl. Twist tight until liquid streams out. Keep twisting to get out as much liquid as possible. A friend can help, and you can do this in batches if it’s easier.

4. Heat the oil to very hot. Set a couple layers of paper towels on a plate.

5. After a few minutes, gently tip the bowl to let the liquid run off. You should have a layer of potato starch at the bottom. Leave it! Add the potatoes and onion, egg, salt and pepper. Stir very well.

6. When the oil is hot, scoop out a couple tablespoons of batter into the oil and flatten slightly. You want lacy edges and a slightly thicker middle. Don’t overcrowd— the oil should keep sizzling. Cook until well-browned, about 4 minutes, then flip and finish browning.

7. Remove from skillet and let drain on towel while you make more.

Make latkes with me! I’ll be joining the great folks at Community Kitchens to lead a latke-making class on Sunday, Dec. 13 at 3pm PT / 6pm ET. Gather your ingredients and cook with me, asking any questions you like. Free sign up here.

The secret to legendary latkes