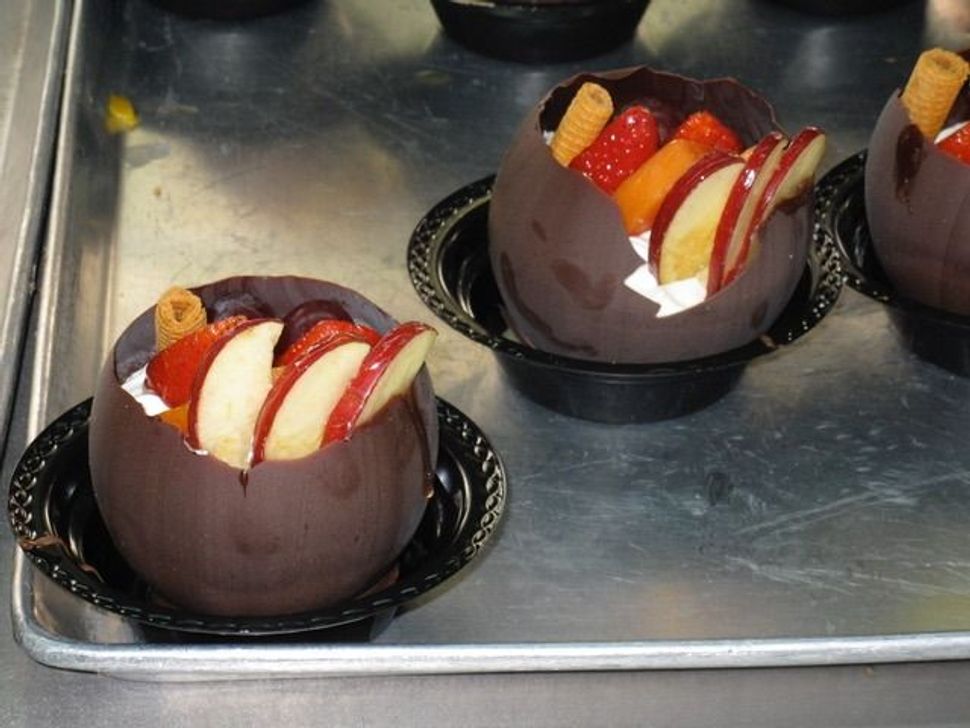 Carob has long been associated with the Jewish holiday of Tu B’shvat, the New Year of the Trees. But would it be so wrong to include a little chocolate, too? Each has religious connections. Sometimes one is confused for the other. Sometimes, carob even substitutes for chocolate. However, only the carob has traditional associations to this week’s Tu B’shvat and its celebration of trees.

Carob is the fruit of a tree that grows in Israel. Chocolate is derived from the cocoa tree, which bears the scientific name theobroma — “the food of the gods.” While the carob has its roots in the Mediterranean, the cocoa tree is rooted in Central America. Both produce pods, which in turn contain edible seeds.

People of a certain generation recall carob as chroov in Hebrew or, in Yiddish, bokser, from childhood celebrations of Tu B’shvat. Hebrew school teachers passed around the lanky, tough pods for us to nibble at our school desks in California, yielding a taste of Israel. That expanded our palate, though perhaps not so much our desire for Israeli foods.

Middle Eastern-based religions love carob. The Talmud notes that carob pods alone nourished the impoverished Rabbi Hanina ben Dosa from Shabbat to Shabbat. (Ta’anit, 24b) The famous Honi Hamaagal story about planting for future generations centers on a carob tree. (Ta’anit, 23a). During Ramadan carob juices are drunk. In Christian sources, the Book of Matthew (3:4) claims that John the Baptist ate carob in the desert, thus explaining its English name as St. John’s Bread. Perhaps this association explains the presence of carob on Easter and Lent menus.

Cocoa trees only grow in a band 20º north and south of the Equator and, therefore, not in Israel. But Cantor Eric Schulmiller doesn’t think geography is a good reason not to celebrate cocoa trees as well as carob. He created a Tu B’shvat seder ritual that includes chocolate.

“Of all the tree foods,” he explained in an e-mail, “ chocolate feels most likely to bring about the spiritual, transcendent experience envisioned by the Seder’s mystical creators. Chocolate may be the only edible tree food (not counting coffee) that requires human-assisted processing in order to be enjoyed.”

So why not enhance your celebration with some delicious chocolate bark using dried fruits from Israel. It’s nice to have choices.

Rabbi Deborah R. Prinz is the author of “On the Chocolate Trail: A Delicious Adventure Connecting Jews, Religions, History, Travel, Rituals and Recipes to the Magic of Cacao” (Jewish Lights) and the upcoming “The Boston Chocolate Party” (Behrman House).