The Jewish history of Gold’s Horseradish 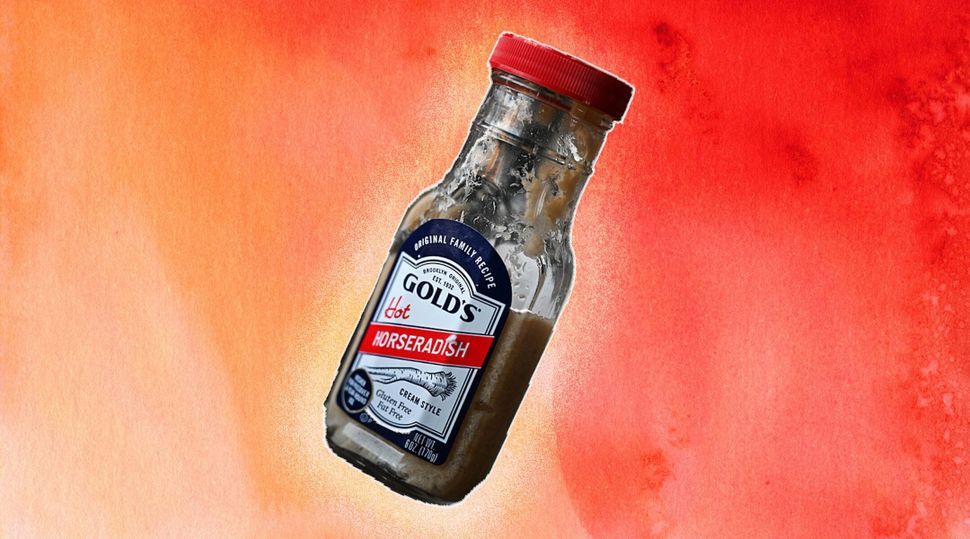 If you happened to be walking down the 800 block of Coney Island Avenue in Brooklyn in the 1930s, you might have caught a whiff of horseradish in the air. From their Brooklyn apartment, two Jewish immigrants — Hyman and Tillie Gold, from Ukraine and Romania, respectively — were peeling the pungent roots at their kitchen table, filling bottles of prepared horseradish by hand and labeling them with homemade labels and paste made from flour and water.

The couple came into the horseradish business almost by accident. Hyman’s cousin worked on the sidewalk in Borough Park, Brooklyn, peddling the freshly-peeled root in front of a busy store; but when he got into a dispute that turned physical with the store owner, he landed in jail and called on Hyman to bail him out. Hyman’s compensation was his cousin’s horseradish grinder.

Having recently lost their business selling and repairing radios, the Golds were all in on horseradish, which Hyman sold, four jars at a time, to shops and delis in the neighborhood.

Horseradish is a staple of the Passover Seder because it has come to represent maror, bitter herbs, which symbolize the suffering of the Jewish slaves in Egypt. The Golds were gambling on one thing: that the predominantly Jewish families in the area would prefer for someone else to do the crying over their horseradish for the Seder. That bet paid off, with four generations of Golds eventually working for the family business.

As word of Gold’s Horseradish grew, Hyman employed his three sons — Morris, Manny, and Herbert — to deliver bottles on their bicycles and via the train. One brother would wait at each stop while the third would stay on the train, shuttling bottles back and forth, to avoid paying multiple fares. Horseradish engulfed the Gold household. The family grew the galloping roots, weed-like and unruly, in their backyard, and they would fill the bathtub with the dirt-encrusted horseradish roots to wash them. The air in the small apartment was constantly tinged with the eye-watering fumes, which wafted from the open window to the streets below.

As they outgrew their home operation, the Golds moved the business to 4127 18th Avenue in Brooklyn, where, over the next two decades, they introduced automation that allowed them to speed up production and introduce new products, like borscht in 1948. According to third generation owner Marcus Gold, when they brought in a filling machine to fill the jars, his grandmother Tillie, who had filled jars by hand using a small funnel, in classic bubbe fashion, remarked, “Why did you buy a filling machine? I’m a filling machine!”

The family were used to doing all the work themselves — and by hand. At 6 years old, Marcus Gold remembers marking the boxes of beet horseradish with a fat red marker, his first task for the family business. As a teen in the 1960s, around the holidays especially, he and his cousins would be called in whenever someone didn’t show up to work. The long days started at 7 a.m and went on nonstop with the brisk pace of an assembly line in motion. “We always made sure we had enough to be used for the next couple of days, but we didn’t stock up. So when the production list was made, we had to get to that amount made,” he recalls.

By the mid-1970s, the third Gold’s generation — Steven, Neil, Howard, and Marc — took over under the leadership of their fathers, who were mourning the loss, in 1975, of their mother, Tillie. Over the next two decades, the brothers and cousins worked together to make every major decision for the brand, continuing to grow the product line and, in 1994, relocating to Hempstead, New York, in the western part of Long Island. Eventually, Steven’s daughter Melissa and Marc’s son Shaun joined the team, marking the fourth generation to contribute to the family business.

It was Marcus Gold’s father, Morris, who instilled in him the importance of advertising. Morris was responsible for introducing Gold’s jingle, “If it’s gotta taste great, it’s gotta have Gold’s,” punctuated by the ringing of a bell. From the business’s earliest days, Morris knew that name recognition mattered, so he brought signs and window decals for store owners to display, letting shoppers know that their store carried Gold’s products. “Advertising gave the appearance that you were bigger than you really were,” says Gold. In the early 1950s, Gold’s hosted Miss Horseradish contests to raise brand awareness. Gold’s also bought ad space in Haggadahs produced by local grocery chains to further emphasize their connection to the Seder table.

This insistence on name recognition stuck with Gold, an avid baseball fan and the founder of the Mets Fan Club. After the business made its final move to Hempstead, New York and began manufacturing specialty mustard, Gold saw an opportunity to get their mustard into Shea stadium. It was the chance of a lifetime for Gold, and after convincing the rest of his family (which required securing Mike Piazza to do a Gold’s bobble head doll promo), the brand began their conquest of baseball stadiums. To this day, Gold’s is the go-to condiment brand for stadiums around the country.

In 2015, the Golds sold the brand to LaSalle Capital, a Chicago-based investment firm. In early 2021, that company announced the closure of the Hempstead factory, but a representative from the company says production will continue undisturbed. Though Gold’s is no longer made in Brooklyn, memories of the brand linger, in Brooklyn and beyond, any time someone opens a jar of horseradish for a Bloody Mary or their Passover Seder.

The Jewish history of Gold’s Horseradish