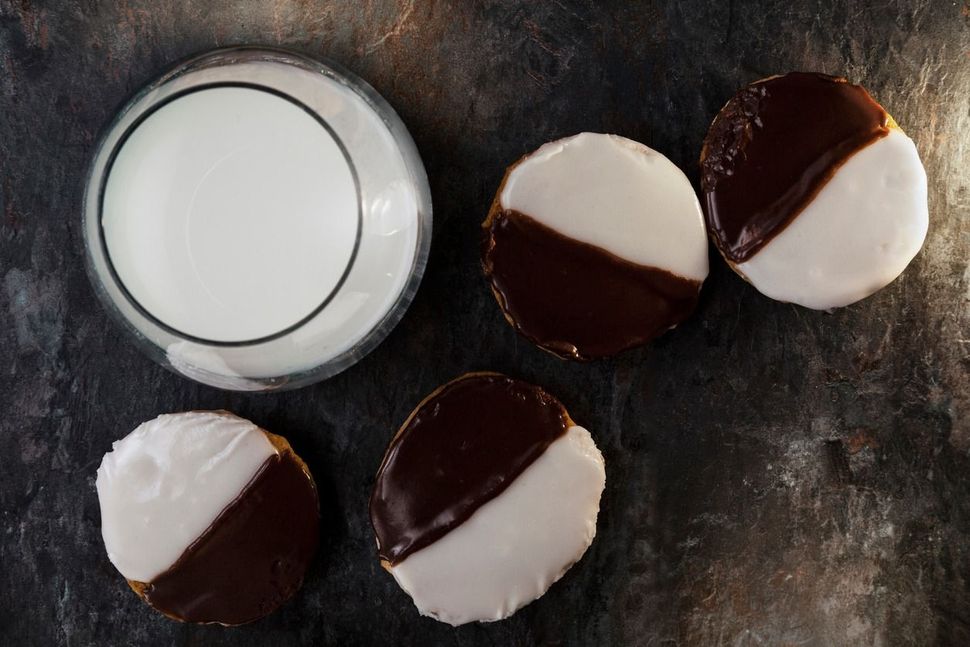 The first time I cried in a bathroom, the only thing that soothed me was the promise of a black and white cookie.

It was 2009, a week before my ninth birthday. A different virus, the swine flu, was poised to run rampant in my elementary school. My teacher told the class that to curb the spread of germs, we wouldn’t be allowed to bring in food from home. Having waited all year for my turn to make birthday treats, I was crestfallen. That afternoon, my mom assured me that, despite my disappointment, everything would be alright. We would instead get black and white cookies, she said, from my favorite bakery, William Greenberg’s Desserts.

Unlike their mass-produced cousins, which frequent bodega counters and bad onegs, William Greenberg’s black and white cookies were a delicacy. Back then, the Upper East Side bakery was cramped. Baked goods seemed to pour out of racks of shelves. Below the counter, glass display cases flaunted cakes and tarts. Above it, trays overflowed with cookies: some linzer tarts, some sugar cookies, but mostly black and whites.

On its website, the store proudly touts itself as home of New York City’s #1 black and white cookie. The bold, possibly immeasurable claim is uncited but apt. Ina Garten served them at a party for Sheryl Haft’s children’s book “Goodnight Bubbala.” She told Page Six that William Greenberg’s take on the cookie was chosen out of “almost every cookie in New York” by a rigorous process of elimination. Yes, the cookies are good. But they’re limited by the fact that black and white cookies are inherently unspectacular. As food journalist Molly O’Neill wrote, “There is no such thing as a delicious black and white cookie. They are either edible or inedible.”

The Jewish history of the black and white cookie

So how did this seemingly unimpressive treat become a Jewish New York City icon?

Like many famous New Yorkers, the black and white cookie’s history begins with a tale of reinvention, where mythology supplants fact. Some food historians trace the cookie’s origins to the early 20th century at Hemstrought’s Bakery in Utica, N.Y. Then called “half-moons,” they had a smaller, more domed chocolate cake base iced with thicker, fluffier, vanilla buttercream alongside chocolate fudge.

Others say the cookies came to New York with Bavarian immigrants, who may or may not have been Jewish. When John and Justine Glaser founded Glaser’s Bake Shop in 1902, the black and white was among their original recipes, said their grandson, Herb Glaser, who ran the Manhattan bakery until it closed in 2018.

No one quite knows how or why the cookie’s popularity exploded, but by the mid-20th century, they were everywhere. “I think part of the cookie’s appeal was its ubiquity in Jewish bakeries,” said Leah Koenig, the author of “The Little Book of Jewish Sweets.”

That ubiquity meant generations of Jewish children got black and whites with their parents and grandparents, situating the cookies as a nostalgic treat in the collective memory. Ultimately, sheer proximity to Jewish culture, rather than any inherent Jewishness, put the black and white on Tablet Magazine’s list of the 100 most Jewish foods.

Simple yet visually striking, the black and white cookie appeals directly to the inner child. Its twin halves pose infinite eating possibilities. My sister, a chocolate fiend, starts with vanilla and saves the best for last. My mom, the ultimate peacemaker, breaks it in two, perpendicular to the line between vanilla and chocolate. I eat black and whites like the disgusting overthinker that I am: splitting the vanilla from the chocolate, breaking pieces from alternating halves, then peeling off bits of icing and eating them after each bite of bare cookie.

In “New York City Food: An Opinionated History,” Arthur Schwartz laments that black and white cookies are often underwhelming. They go stale. The cake is too dry. The icing is too soft or too sweet or not sweet enough. Still, the cookies from the Jewish bakery in his childhood home of Marine Park, Brooklyn make him reminisce. “When I was a kid I certainly loved them,” he writes. “Maybe when I was a kid, they were good.”

William Grimes, too, upholds the cookie’s primary value as nostalgic. In a 1998 tribute to the cookie in The New York Times, he wrote: “Today’s black and white cannot compare with the black and whites of yesteryear, of course, just as no mayor will ever be as good as La Guardia and no team as beloved as the Dodgers.”

Maybe the black and white cookie is an ambivalent Jewish answer to Proust’s madeleine. Childhood memories come flooding back with the first bite, but any blissful montage is interrupted by the inner monologue of an unimpressed Larry David character. 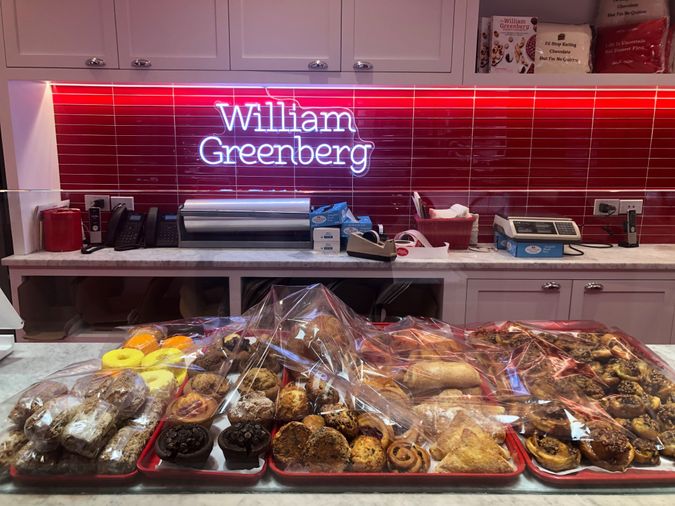 William Greenberg’s black and white cookies were a delicacy. Photo by Rebecca Salzhauer

I recently went back to William Greenberg’s to test this theory. The bakery, now spacious and sleek in a red-tiled, retro kind of way, had expanded into the space next door. Thanks to the renovations, the same tarts and cakes lined display cases with a calmer sense of order. And there were the black and white cookies, still on the counter, still exactly the same.

When I got home, I looked down at the cookie, considering how to eat it. As old instincts kicked in, I split the two sides in half. I broke a piece off the vanilla side and peeled up the icing with the back of my thumb. The sugar dissolved on my tongue, a synthesis of every black and white cookie I’d ever eaten before. I swallowed and began to evaluate. Was this cookie as good as the ones I remembered? Maybe not, but it was pretty, pretty good.