East Coast v. West Coast Bagels, so which are better? 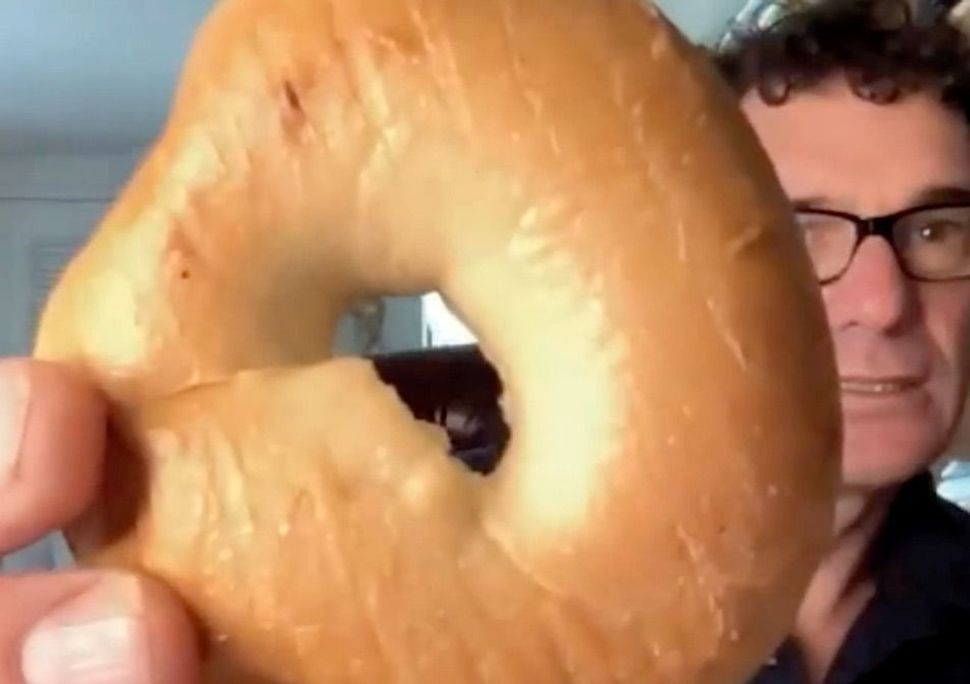 In the scheme of things —Afghanistan, global warming, the Delta variant— the “Great Bagel Off” may not ask the most urgent question, and yet 2,500 people signed up to hear the answer. That’s right: 2,500. Not to actually eat bagels. Just to watch other people eat them, and decide: Which coast does have the best bagels, East or West?

That was the issue at a virtual tasting panel I moderated Aug, 24, sponsored by New York’s Temple Emanu-El Streicker Center and the Forward.

Were the curious mostly New Yorkers, expecting to be reassured in their sense of superiority in all things deli (or, to be honest, in all things, period)?

Or were they like those Californian winemakers who went up against the great French houses of Bordeaux in the 1976 Judgment of Paris? The Californians knew they were better, they just wanted the world to admit it.

“West Coast bakers are driving a great bagel boom, producing some of the most delicious versions around,” she wrote. “Emily Winston’s bagels are some of the finest New York-style bagels I’ve ever tasted. They just happen to be made in Berkeley.”

Could it be? Or was this just a case of some overhyped upstarts ripe for a take-down? This week, the New Yorker weighed in on the take-down side, publishing a (hysterical) satirical piece, “A Guide to Purchasing Your Very Own Los Angeles Bagel” by Joanna Bradley.

“The first Los Angeles bagel was baked more than seven years ago,” she wrote. “Made from yeasts available only at the Venice Erewhon, and heirloom wheat harvested from weevil poops, it was lovingly formed by the calloused hands of a lesbian Silver Lake bike mechanic and then boiled by her business partner, Los Feliz Dad Who Used to Be an Account Executive at Saatchi & Saatchi but ‘Decided to Give the Bagel Thing a Shot.’”

Maybe Bradley is on to something, or maybe New Yorkers are just sore losers.

In any case, the entire debate prompted the idea of— more debate, a contest that relied on more than just one person’s taste buds. 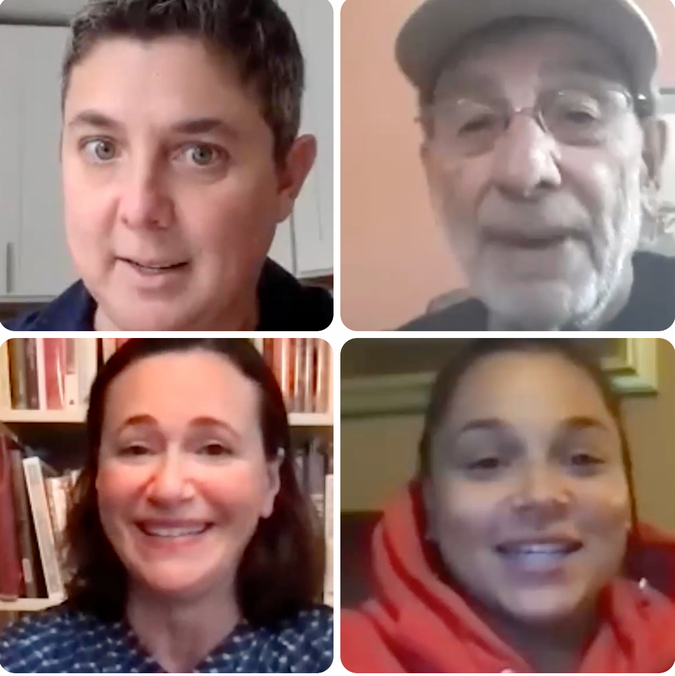 Young, old, East, West and Midwest— we were a diverse bunch with no axe to grind, except, perhaps, against blueberry bagels.

“I’m basically not in favor of these,” said Berk. “I’m a traditionalist. Give me a bagel similar to the one that I had 20 years ago and I’ll be perfectly happy.”

The bagel list was representative but not exhaustive. We did not, to the chagrin of dozens of commenters, include Montreal bagels. Yes, we know they are great. But this was East v. West, California v. New York. Coastal pride was on the line; the New Yorker would never think to mock Montreal.

The idea was we would eat, talk and pass judgment, basically the arc of every deli conversation, ever.

The contest came with caveats: It was not a blind tasting. Two of the judges had bagels in the running. The bagels weren’t fresh, when all bagels are at their peak.

She’s right. Also, no rules were enforced on how judges were to eat their bagels. Moskin spread hers with cream cheese. I used seltzer as a palate cleanser. Len Berk, of course, tasted his with lox that he had sliced as thin as tracing paper. 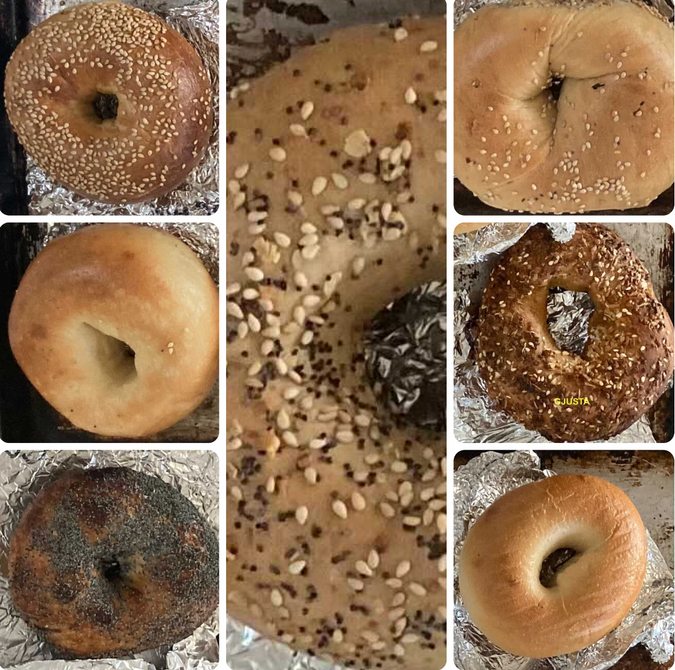 We’ll get to the conclusion in a bit. First, some insights, bagel by bagel.

“What we have here is a combination, bringing New York and Montreal together,” said Winston. Eshman noted a “thin crackle and a taste of honey” in the crust (Montreal bagels are traditionally boiled in water with a bit of honey.) Jackson thought it, “Kind of meh.” Moskin said, “I’m biased, I love this bagel. It’s not my local bagel, but it’s my hometown artisanal bagel. It’s got a really good crumb.”

A machine-rolled bagel inspired by the original H&H Bagels. Eshman said they were, “dense and chewy, but not gummy or heavy. They have a nice light crumb.” “One of the best plain bagels I’ve had so far. I keep going back for more,” said Jackson. Moskin also liked its “pronounced malty sweetness.”

“You can just hear the crunchiness of it,” said Eshman. All the judges tasted olive oil and sourdough in it. “It feels like it has a relationship with focaccia,” Moskin said. “Naturally fermented. It’s really good with cream cheese. By itself it almost doesn’t taste like a bagel, but with cream cheese the contrast is fantastic.” “I really like it, a totally different thing,” said Jackson. “It has a nice richness.”

Thick, larger, almost square shaped, noted Eshman. They are “snowflakey,” said Winston, each one handmade and a bit unique. “These are very hand-made, stretched and twisted,” Moskin said, “A good example of why Americans love bagels. An Ess-a-Bagel is like a meal. It’s filling, it’s cheap. That substantial starchiness is something that I love, and it has a light touch of sourness that I think is ideal. I feel like it’s kind of perfect.” Jackson: “I like the density of it. It reminds me of a bagel I would like to have with a tuna salad, load it up.”

“A lot more sourness rather than sweetness, more dry and dense,” said Jackson. Eshman: “A very roasted, wood-oven, rustic taste.” “Really good,” said Winston. “Looks to be a whole wheat flour in part if not entirely. It’s super sour, a totally different thing. The bottom crust is fascinating, more dusty.” “The crumb is much more brown, it tastes more like a sourdough wheat bread in a good way,” said Moskin.

The panelists noted this is the reborn H&H, not the original one. “I was so looking forward to connecting with H&H bagels,” said Winston, who was disappointed. Jackson: “It’s good, it tastes just like I was used to growing up.” Moskin: “A little too sweet.”

Speaking of nostalgic, before we get to which bagels are the favorites, let’s get back to the question of why. Bagels are the Jewish madeleine, the ratatouille in “Ratatouille.” They’re the baked good that takes us back through time to some perfect happy moment. I had good bagels growing up in the old country, Encino. But my madeleine moment came on my first adult visit to New York, when a friend walked me into H & H Bagels on the Upper West Side more than 30 years ago. I bit into one of their bagels hot off the rack, and I was a goner.

That, I think, is why in the midst of pandemic, war and assorted chaos, 2,500 souls signed up to watch “The Great Bagel-Off.” It’s about tradition, memory, loyalty and, most of all, connection— East Coast or West.

The judges were unanimous: you cannot truly rate or compare these bagels given the vastly different styles.

In general, the West Coast artisanal bakers used a more sour fermentation and higher-end raw ingredients. The bagels were more crackly, with airier interiors. The classic New York bagels were more dense, sweeter and more neutral, serving as foils for the inevitable lox and cream cheese.

There were exceptions, such as Black Seed and Boichik, which took from both styles, and which had big fans on the panel.

But to me, it was a like a big budget comedy going up against an indie drama for Best Picture— the choice of which is truly “the best” is subjective, if not mood-dependent. (Or, in the case of bagels, topping-dependent).

“These are all choices bakers can make,” said Moskin “and we can choose the style we like.”

For Moskin, the bagel difference reflected the larger differences between West and East coast food.

West Coast bagels, she said, “have a more Mediterranean influence, just like the food. They have more expensive ingredients, the raw ingredients, the flours really come through. They’re better by certain modern standards, if you want something that is more individual and crafted, and made from ingredients that you can see and taste, the same way you would if you went to dinner at Chez Panisse. But then [New York] bagels are more in line with the whole traditional way of eating bagels.“

The West Coast bagels, said Moskin, are better eaten on their own, the New York bagels in tandem with butter, cream cheese, lox, whatever. She did love “that chewiness” of the Ess-a-Bagel, though.

Berk, of Zabar’s, recused himself from judgment, except on the issue of those blueberry bagels. “Blueberries are for pancakes.”

Jackson had no qualms. She selected Berkeley’s Boichik Bagels as her favorite.

“I won’t plead the fifth,” she said, speaking to Boichik founder and panelist Winston. “I felt I could taste your childhood in the bagel. Your menu should be able to explain who you are, and I could see that and taste it. That was definitely my favorite.”

My own take: Overall, West Coast bagels were more to my liking, with the Courage Bagel a standout. But one bite of the Zabar’s plain water bagel and I was transported back, Ratatouille-like (or madeleine-like, if you prefer), to that first moment I bit into a warm New York bagel, and the world was suddenly amazing.

“All of them were fantastic,” said Jackson. “I’m ready to try them fresh out of the oven, straight from the establishment, whether it’s East Coast or West Coast.”

East Coast v. West Coast Bagels, so which are better?