How I learned to make babka and rugelach from the master, Dorie Greenspan My confession to Dorie Greenspan, the five-time James Beard Award-winning author of the delightful new cookbook, “Baking With Dorie,” was flat-out embarrassing: Until now, I’d never made either babka or rugelach.

This was in spite of the fact that I’d been a longtime food writer—and had even been a food editor at the Forward.

“I always thought, ‘Why bother?’ I told Greenspan. “I live near Zabar’s.”

Well, now that I’ve done it, I can tell you why I’m glad I did: Because when I made them myself, I was overcome with satisfaction and pride that I could create such delicious, true-to-life versions of those iconic Jewish desserts with my own two hands. And the reception these warm-from-the-oven confections received was beyond anything I could expect when serving store-bought baked goods.

“You said the best thing when you said you can’t believe you made it,” Greenspan said when I told her about the babka. “That’s so exciting for me. The recipe takes a long time. But there’s something so wonderful and satisfying about being able to make something yourself, something you normally would buy. Making it at home, it’s a whole other level of thrill.”

I felt the thrill. More importantly, perhaps, I felt confident — because Greenspan’s instructions are so clear and straightforward, and her approachable, amiable voice comes through the same on page as it does over the phone.

“Baking With Dorie” contains two babka recipes: a more-or-less classic one filled with cocoa and cinnamon and a sublime savory variety called Cheese-swirl Babka Buns. Both start with the same brioche dough (which is made a day in advance), but the latter involves four kinds of cheese — ricotta, cream cheese, parmesan, and either cheddar or gruyere — along with chives and shallots, and gets a sprinkling of cheesy streusel that takes the whole thing entirely over the top. I ate one of the buns: It was fragrant with yeast, cheese, and chives; flaky on the outside, crunchy on top, and soft and rich within. I promptly gave the other seven away, lest I consume them all immediately.

“You know what I call this? ‘Bake and release,’” Dorie said when I told her. “It’s the only way to be a baker. It’s a great way to make friends, and make people who already love you love you more.”

People have been loving Dorie Greenspan and her cookbooks since her first one, “Sweet Times,” came out 30 years ago. “Baking With Dorie” is number 14.

Well, if there’s one thing we can be sure of, it’s that life doesn’t always go according to plan.

“I was in Santa Barbara for a wedding, and I went to a café and had a coffee and cheddar scone, and I took a picture and put it on Instagram and within seconds the author Ann Mah, who wrote ‘The Lost Vintage,’ sent me an Insta message and said, ‘You should write a savory baking book.’ And I got so excited.”

As soon as Greenspan got back from California, she started working on it. 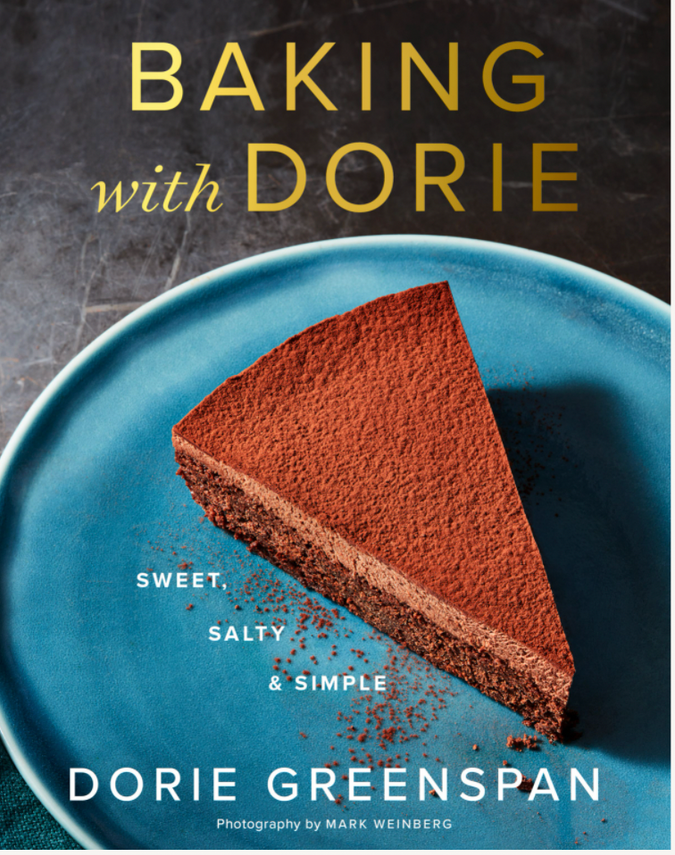 “It was going to be all savory and it just kept getting sweeter and sweeter,” she said. “I never know what I’m going to do until I’m finished. Usually what I end up with is close to what I started out with, but this one took a real turn.”

What began as a book of savories now contains all manner of delectable dishes, from breakfast foods to lots of desserts to a chapter called “Salty Side Up” that’s full of recipes for side dishes, lunches, dinners, and snacks — think Potato-Parm Tart; Spinach-Mozzarella Pie With Parm Crumble; Double-Corn Tomato Crisp; Asparagus-Lemon Quiche; and Custardy Apple and Kale Cake. 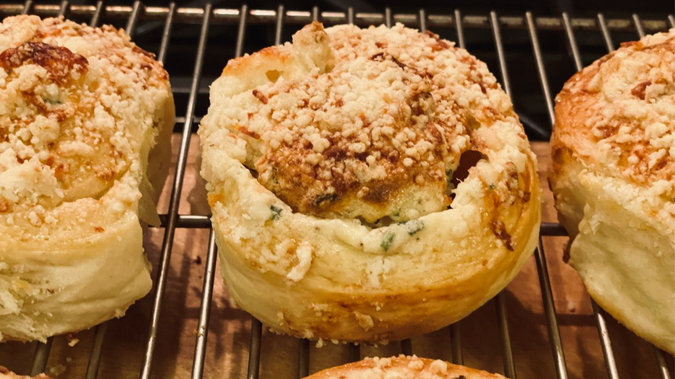 This is Greenspan’s first “all-purpose” cookbook since “Baking From My Home to Yours,” which was published 15 years ago. “This is my morning-to-midnight baking book,” Greenspan said. “It can take you from breakfast to that last little nibble before bed. This is new for me.”

Also relatively new: Greenspan is now a grandmother. Her granddaughter Gemma, to whom this book is dedicated, is 15 months old.

“She just stares intensely when she sees anyone at the oven,” she said. “If you’d asked me before she was born what I hoped, I might have said I hope she’s an adventurous eater; I hope she loves food. And now 15 months in, she is all of those things.There are some foods where literally her eyes just open wide wide wide when she sees them.”

Greenspan did not learn to cook by watching wide-eyed as a family member worked at the oven. Her mother didn’t cook at all — she used her oven to store boxes of cookies and crackers. Her Russian grandmother did bake — she made a wonderful apple cake — but she died when Greenspan was 17 and had yet to develop an interest.

Greenspan didn’t learn to cook by going to culinary school either.

“I taught myself how to bake and cook through cookbooks,” she said. “If there was something I wanted to learn, I would make it over and over again. The first time you make something, you just want it to come out right; you’re trying really hard. The second time you know you’ve done it, it works, it’s delicious, and you can really enjoy the process of making it. You pay more attention to the pleasure of making it.”

I told her that the rugelach weren’t nearly as intimidating as I thought they might be. The cream-cheese dough is very easy to work with, and her recipe does away with the traditional crescent shape, which, Greenspan writes, is “fussy to form.” Instead, she instructs the cook to “treat it like slice-and-bake cookies,” rolling the filled dough into a tight log and then slicing it into cylinders.

“When you make the rugelach for the second time,” she told me, “you will know it.”

I look forward to making it again — perhaps to “bake and release” during Hanukkah — but my copy of “Baking With Dorie” is studded with bright pink sticky notes, indicating other recipes I’m excited to try.

There are, for instance, a number of tempting bakes that call for oil instead of butter. Some use olive oil, which got me thinking about Hanukkah celebrations. (It can’t be all latkes and sufganiyot all the time, after all.) One recipe, which would be a stunning hors d’oeuvre at a holiday gathering, is Blue Cheese Bites — sweet-and-savory little morsels studded with chopped figs. (Greenspan suggests substituting pears or dried fruit when fresh figs are out of season.) There are also Olive-Oil Brownies, Apricot and Pistachio-Olive Oil Cake, and Goat Cheese-Black Pepper Quick Bread, which Greenspan recommends nibbling with a glass of cold wine. 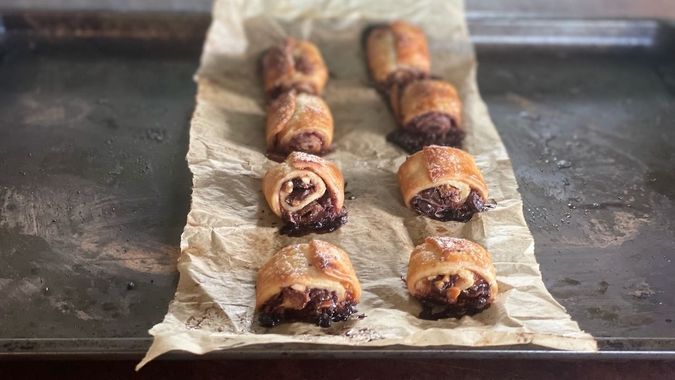 Traditional for Hanukkah? Not at all. But with eight nights to play with, why not let Greenspan guide you in a new direction? She said that after 30 years of writing cookbooks, she’s learned that “some of the things I was taught, I don’t have to follow. Rules that were given to me as unbreakable, guess what? You can break them.”

In the same spirit, many recipes in “Baking With Dorie” end with a note called “Playing Around,” where she offers variations, additions, and ingredient substitutions — all in that amiable, approachable voice. The message is clear, here and throughout the book: Greenspan is going to guide you every step of the way, demystifying the baking process while granting permission to have fun — something she’s been doing for 30 years… and counting.

How I learned to make babka and rugelach from the master, Dorie Greenspan