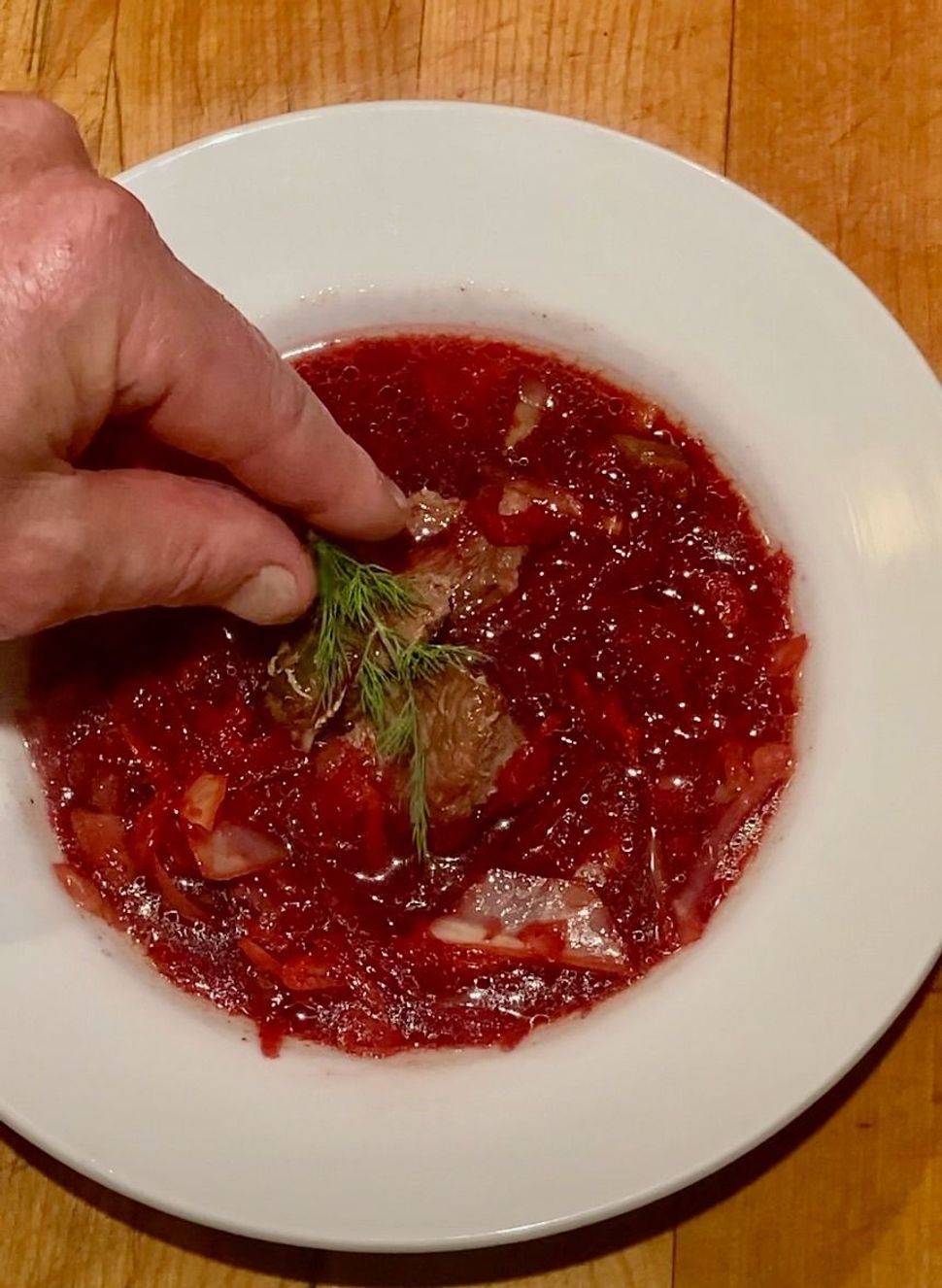 If you hung out in pre-gentrification downtown L.A., circa 1980, you’ll know what I mean. Gorky’s was a warehouse-sized cafe, open 24/7, a glorious Socialist workers commissary crossed with a starving artist cafe. You went there hungover at 11 a.m. for bottomless coffee and a slice of poppy seed cake, or at 3 a.m. to eat a heavy knish and a bowl of hot borscht.

You get nostalgic for restaurants either because you miss what you ate, or you miss who you were when you ate there. In this case, I don’t miss my 20-something self. Jonathan Swift was onto something when he said no wise person ever wished to be younger. What I miss is the borscht.

Why? It was a revelation.

Until Gorky’s, all I knew about borscht was that it was Jewish and came out of a jar. I grew up eating the thin, watery Manischewitz, the color of punch with a sediment of soft julienne beets. My mother served it chilled many Sundays, and by the time she gussied it up with sour cream and chopped cucumbers and dill, it was substantial and delicious.

But that stuff, sold behind every deli counter of my youth, was entry level compared to Gorky’s borscht: steaming hot and stew-like, fragrant with cabbage, beets and dried mushrooms.

Gorky’s version opened my eyes to the notion that Jewish food had roots and offshoots, variations and connections. It sent me down a pre-Internet rabbit hole lined with Russian cookbooks, where I would become obsessed with kissel, milk-less fruit puddings, and blini, which resonated with someone who only knew from blintzes, and of course pierogi, which came into my life first as kreplach.

That borscht taught me to be humble in my judgment that any version of any food was the best, the most authentic, the original or unique to my culture. It taught me something I know to be true, deeply true, to this day: food can be a powerful way to open our minds to other narratives and our hearts to other cultures, if we let it.

But, poor Gorky’s. It closed in 1993, after investors bought it from its visionary founder, an idealistic former high school librarian named Judith Markoff. The new investors over-expanded, adding a brewery (featuring Imperial Russian Stout, of course), thousands of square feet, and a Hollywood location. The scruffy proletariat vibe gave way to something Disney-esque—Commieland!— and the bloated business collapsed in on itself, taking my simple bowl of hot, midnight borscht along with it.

Just like Maxim Gorky said: “Happiness always looks small while you hold it in your hands, but let it go, and you learn at once how big and precious it is.”

The borscht I remember eating on a cold night at Gorky’s was vegetarian, and I include that as a variation. The one below is fortified with deeply browned and tender beef. This recipe draws from many sources, including Darra Goldstein’s “Beyond the North Wind” cookbook.

Cut beef in 2-3-inch cubes. In a deep pot, heat oil in large skillet. Sear beef to brown on all sides. Add water to cover and other ingredients. Bring to boil, then lower heat and simmer 2 hours. Remove bay, carrot and onion. Remove meat and set aside.

(Instant Pot variation: After searing beef you can add ingredients to Instant Pot and cook for 45 minutes).

In a soup pot, add heat oil. Add onion and garlic and saute until golden. Add liquid, then add beets, carrot, cabbage, bay leaves, salt and pepper. Bring to a boil then reduce heat and simmer for 20 minutes.

To serve, place a little meat in each bowl, add soup, top with dill.

Vegan version: You can leave the meat and chicken stock out, using mushroom broth instead. Or: add 1 cup soaked and chopped dried mushrooms to the broth.