Adafina, ready for the oven

Adefina, adafina, dafina, aní, hamín, caliente, trasnochado. All these names refer to one thing: the quintessential Shabbat dish of the Sephardic Jews of the 15th century. It was commonly known under different names, and this would have been one way Jews were able to deceive Inquisition officials, as this dish would have revealed the makers and eaters as Jewish. All terms refer to the characteristics of the dish: adefina, adafina, dafina mean “buried, hidden.” Aní, hamín, caliente refer to the fact that the dish is “hot.” And trasnochado refers to the fact that it is cooked “overnight.”

Out of respect for the history of this recipe, the method presented here does not contain New World ingredients—like potatoes and sweet potatoes—that are now frequently used by Sephardim to prepare Adefina.

Chef and scholar Hélène Jawhara Piñer joined Rob Eshman, Forward national and food editor, on Jan. 26 for a discussion of her book, ‘Sephardi: Cooking the History. Recipes of the Jews of Spain and the Diaspora, from the 13th Century to Today’ and a demonstration of how to make adafina, Sephardic Sabbath stew. You can watch the video here, and follow the recipe below. 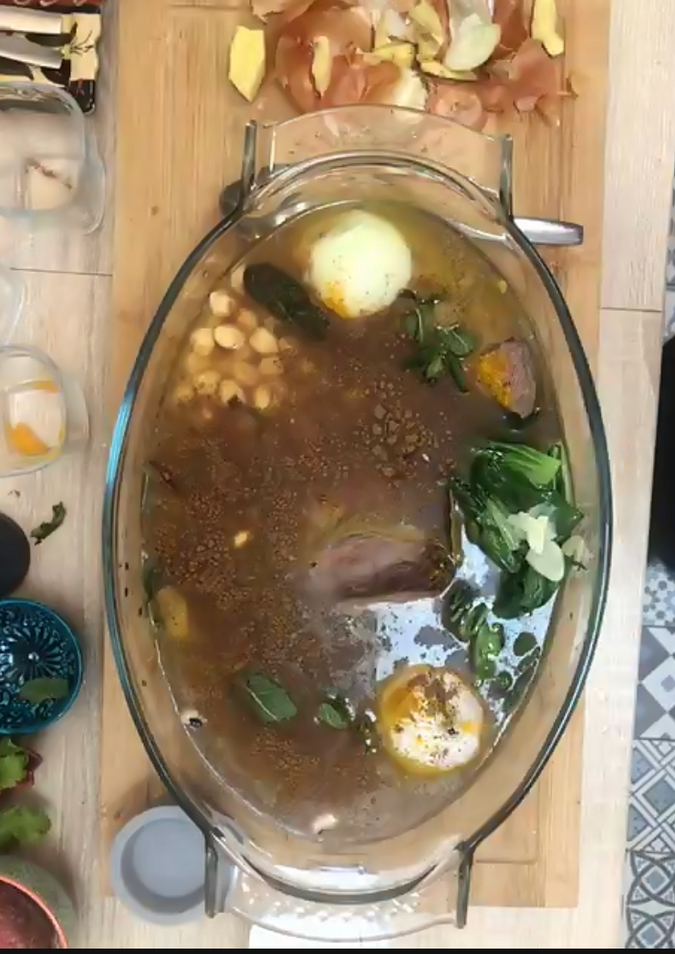 Adafina, ready for the oven

Add the meat (bone in) to a large ovenproof pot along with the sugar. Brown for 5 minutes over high heat on the stove. Add water just to cover the meat and bring to a boil; boil for 10 minutes. Skim off and discard the layer of fat that forms over the water.

In the same water, add the whole onion, olive oil, bay leaves, salt, the whole head of garlic, cinnamon, black pepper, nutmeg and turmeric, without overlapping if possible. Next, add the chickpeas, whole eggs in their shells, dates, Swiss chard and mint leaves.

Meanwhile, make the fried rice separately: Take a frying pan and add the olive oil, rice, garlic, salt, turmeric and saffron. Brown for 5 minutes over low to medium heat. Let the rice cool, then place it in the muslin and tie it up. Add the muslin to the pot with the meat.

Add additional water to cover all ingredients. Cover the pot and place it in a 200°-oven in the late afternoon. The adefina will be ready the next day in the late morning.

If desired, you can serve the different ingredients from the pot (rice, eggs, vegetables, broth, meat) in separate dishes.

Many hidden Jews were informed on to Inquisition officials by their servants, who became suspicious on Friday evenings when they were sent out of the house when it was time to prepare Adefina. There were many versions of this dish documented in Inquisition trial records throughout the 15th century. All have some variation of these ingredients and are cooked overnight for Shabbat. Andrés Bernáldez (1415 to 1513) mentioned the term “adefina” in relation to the culinary practices of the Jews. In Memoirs of the Reign of the Catholic Monarchs (written in the 15th century), he wrote that Adefina was “a pot-au-feu (puchero) or pot (olla) that the Jews place at nightfall on a stove covering it with embers, for eating on Saturdays.” Various Spanish literary works testify to the preparation and consumption of Adefina between the 14th and 16th centuries.

Recipes and photos from ‘Sephardi: Cooking the History. Recipes of the Jews of Spain and the Diaspora, from the 13th Century to Today‘ by Hélène Jawhara Piñer (Cherry Orchard Books, Imprint of Academic Studies Press 2021)