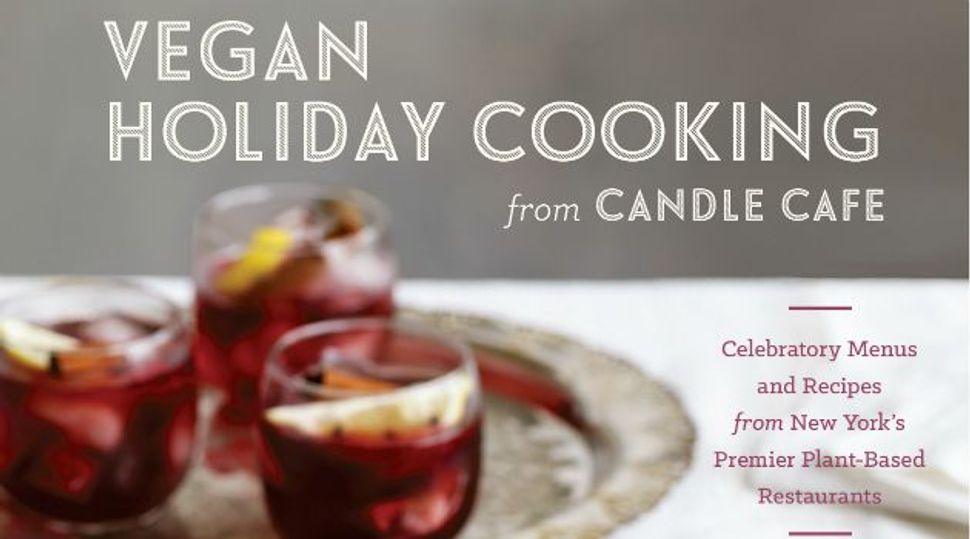 This is a sporadic column by personal chef Alix Wall, in which she evaluates a new cookbook by making some of its recipes, sharing them with friends and asking what they think of the results.

When “Vegan Holiday Cooking from Candle Café: Celebratory Menus and Recipes from New York’s Premier Plant-Based Restaurants,” by Joy Pierson, Angel Ramos and Jorge Pineda, showed up on my doorstep, I flipped through it to see if there were any Jewish holidays represented.

I’m a fan of the trio of New York vegan eateries Candle Café, Candle 79 and Candle Café West, so I was glad to find that among the 10 menus for occasions such as the Superbowl, Lunar New Year, Easter Brunch and 4th of July, is one for Passover. And on that Passover menu are 11 recipes for Jewish favorites that wouldn’t be out of place on other Jewish holiday tables as well.

In a strange twist, though, it turns out that they might be better suited to Chanukah or Rosh Hashanah, because while the most obvious dishes for Passover are a matzo ball soup, a concord grape soda and haroset, some of the other dishes are problematic for Passover.

For instance, Joy’s Grandma’s seitan brisket with roasted carrots, shallots and turnips looks beautiful, but seitan is made from wheat gluten — forbidden on Passover. And for those who observe the Ashkenazi tradition of no kitniyot — legumes of any kind — most of the recipes in this section include chickpeas or tofu.

Even a macaroon-crusted chocolate cake made with almond meal has a bit of brown rice syrup in it, again forbidden if you don’t eat kitniyot. Clearly, vegans have a harder time observing Passover than the rest of us, but those who are observant make due, and many of these recipes wouldn’t work for them.

For a tasting dinner, I chose four recipes to test on a group of friends that included two vegetarians. Would the gefilte tofu (I admit, even the sound of that makes me laugh) and mock chopped liver pass muster with those who eat the real thing and those who don’t? Those were the important questions.

First up: chopped “liver.” I tasted it for seasoning before my guests arrived and realized I was in trouble. It was so delicious that the only direction to go after this fabulous appetizer was down — nothing else would taste quite as good. The headnote suggests making a double recipe, saying it disappears quickly. While a single recipe easily made enough for the seven of us, by the end of the meal it was gone.

In this recipe, sautéed portobellos and caramelized onions are combined with toasted walnuts and chickpeas (again, forbidden on Passover for those who don’t eat kitniyot). The recipe calls for peeling the nuts as well as peeling the mushroom caps. I did both but wondered why, as I don’t think it would affect the taste that much since it all ends up in the food processor. But who knows.

Does it taste like chopped liver? Not at all. But we couldn’t stop eating it, and a sprinkle of truffle salt on top (my add) really pushed it over the edge.

Carle, a vegetarian, liked how well-balanced the flavor was, between umami, savory and almost sweet, while Paulie declared it better than chopped liver. (Note, while he is a carnivore, Paulie doesn’t love chopped liver as much as some of us do.) Adam, another meat eater, said he could envision it as a sandwich spread.

For the gefilte tofu, silken and firm tofu are combined with a bit of mirepoix (chopped carrot, celery and shallots) and agar (seaweed flakes) to make logs of tofu that mimic the old gefilte fish pretty well. A horseradish relish with beets and white wine vinegar is served on the side.

Both vegetarians loved it, with Daniella declaring that she would definitely make it for Passover, as she feels that so many traditional Jewish dishes are lost to her because of her vegetarian diet. Meanwhile the fish eaters said that if they were served this at a seder, they would feel they were missing out on true gefilte fish.

Fred said it reminded him more of egg salad, but the relish made him declare, “That’s some good f&^%$ing chraim!” What caused that declaration was that the ratio of horseradish to beets was off; I would recommend upping the beets significantly. Paulie and I both felt the “fish” could use a bit of acid. He thought capers or chopped pickles, while I thought a touch of lemon juice would perk it up. But we all appreciated the tears, an authentic Passover experience.

The third dish, swiss chard and chickpeas, was on the Jewish menu as well. I needed a simple main course, but the headnote doesn’t explain why it’s there, or why it’s a Passover dish. Again, it has kitniyot, and while the greens are cooked in a red wine and tomato sauce, the dish didn’t feel special enough for a holiday.

Adam said he felt it could be found on any weeknight at a Berkeley co-op. Fred said that if you took the chickpeas out and substituted mustard greens for the chard, it would make a nice Pesach side.

The less said about the macaroon cake the better. While the recipe sounded intriguing, it didn’t work for me. I tried it because I can always use another vegan or gluten-free dessert in my repertoire (and this one is both), but there was too much liquid both in the crust and the batter. The consistency issues just made me want to reach for the butter and make a non-vegan crust.

There were other recipes on the Passover menu that I didn’t try, including sweet potato latkes with almond crème frâiche, sweet potato and apricot tzimmes and chickpea crepes (again, not for an Ashkenazi Passover) with berries and vanilla-lavender cream.

In short, these Passover recipes are for people who want the flavors of the holiday, but who don’t care about the religious dietary restrictions, only the vegan ones. I feel it needs to be said, since the authors do not. But given the Passover section is only part of a greater whole, I’m sure the book will find its audience. While I chose to focus on the Jewish recipes for my review, as an appreciator of good vegan food, I know I am not done cooking from this book.