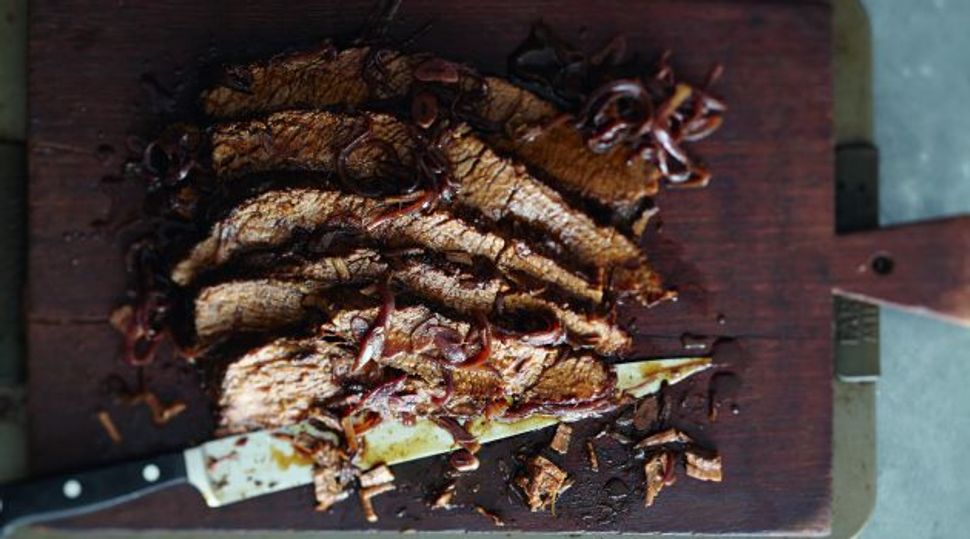 This is an occasional column in which the writer evaluates a cookbook by making some of its recipes, sharing the dishes with friends and asking those friends what they think of the results. For Passover, the writer cooked her way through “Modern Jewish Cooking: Recipes & Customs for Today’s Kitchen,” by Forward writer and contributing editor Leah Koenig.

In the introduction to “Modern Jewish Cooking: Recipes & Customs for Today’s Kitchen” (Chronicle Books), Leah Koenig writes that she felt a certain kind of freedom when she began hosting Sabbath dinners in her 20s.

Her grandmother had died before she was born, she writes, and as a teenager she showed no interest in how her mom made her “legendary latkes.”

“Because I had not inherited specific recipes, I felt free from any pressure to simply copy what I was taught, and free to improvise and add my own personality,” Koenig writes. “I was creating my Jewish repertoire from scratch, and doing it in my twenty-first century kitchen filled with vegetables from the farmers’ market and a sauce-splattered laptop that played music while I chopped. There, I could incorporate ingredients that fell outside the Eastern European repertoire I inherited, and cook in a way that felt true to my life.”

So she adds jalapeños and shallots to matzo balls. And za’atar to savory French toast. I admit, my own attempt to mix up things a bit by serving roasted fennel matzo balls at my family Seder some years ago, from Jayne Cohen’s “The Gefilte Variations” (Scribner, 2000), had some of my family members ready to revolt. We all know some people who are that picky about their Jewish food; it should be exactly as their grandmother made it, and such variations are blasphemous. Well, this book is not for them.

But I take a different approach. I say, “You go, girl,” because let’s face it: If we all ate exactly as our ancestors did, those of us of Ashkenazi descent not only would be bored silly of the old standards, but would also be several hundred pounds by now. With such an abundance of vegetables available to us today, it’s only right that they should be incorporated into the ever-evolving canon of what’s considered Jewish food.

While Koenig covers all the holidays with her own versions of the classics — beet latkes with chive goat cheese for Hanukkah, just to give you an idea — she also offers a number of suggested menus for the major holidays, with Ashkenazi, Sephardic and vegetarian menus on offer.

Granted, there are some recipes that may leave readers wondering what’s Jewish about them, such as roasted broccoli with shallots and lemon (a favorite Sabbath side dish when Koenig worries there won’t be enough food), and roasted cauliflower and red onion. But who can quibble over having more veggie side dishes in one’s repertoire? It makes sense that Koenig used to work for the Jewish environmental organization Hazon — and in fact started The Jew & the Carrot as a Hazon project. For her, vegetables are as much of a starring ingredient as they are a side dish.

For our taste test, we set out to try some of Koenig’s Passover recipes. While it was no problem to find willing participants to eat Passover food at the end of February, finding certain ingredients was more challenging.

I began with Koenig’s Sephardic charoset recipe. Although my family is as Ashkenazi as they come, my aunt discovered an Egyptian charoset recipe some years ago, and since then we always have two versions on the table (with most of us preferring the Egyptian). Koenig’s version was mainly dried figs, dates and raisins, which are simmered in red wine and then put into a food processor to form a paste. They are then mixed together with almonds that have also been through the food processor. Cinnamon, cloves and orange juice are also added.

We enjoyed this spread with challah (because we could, of course, in late February), and later with some goat cheese. Both of my friends, Adam and Miriam, had never had Sephardic charoset before, so it was completely new to them. Upon first taste, Miriam said it reminded her of a molasses ginger cookie, and also of a chutney, while Adam thought the spices made it seem more of a fall dish than a spring one. My husband, Paulie, declared it delicious, especially liking how “gooey, viscous, sweet and spicy” it was.

Next I served Koenig’s jalapeño-shallot matzo balls in my own chicken soup. The recipe called for one small jalapeño, and I had a large one, so I left out at least a third of it. While the matzo balls were perhaps some of the best I’ve ever made (I used schmaltz, since I had some, which may be why), none of us got the heat we were expecting. Jalapeños vary widely, so it’s a good idea to taste a bit when you’re adding them. Adam said the matzo balls were “extremely flavorful,” despite the fact that we didn’t get the heat. Everyone thought they had perfect matzo ball density.

For the main dish, I chose brisket. Koenig is correct when she writes in the recipe’s headnote, “There’s no question that the brisket your bubbe made was the best ever, and you cannot compete with the layers of memories that flavor her version in your mind.” In my case, it was my mother’s brisket, but she’s right about that. Yet I have to say, I may have found a new favorite brisket recipe.

The braising liquid begins with three large onions — in slices — plus garlic and thyme sautéed briefly in red wine and balsamic vinegar. Then more wine, spices, honey and chicken broth are added. The result made the kitchen smell fantastic, and eating it did not disappoint.

Adam called it “straight-up traditional brisket, which I love,” while Paulie liked how the sweet didn’t clobber the savory, saying the two qualities played well off each other. I loved how the onions had reduced to almost nothing but, after four hours in the oven, added such incredible flavor. This brisket was, quite simply, a “wow.”

For our salad, I chose one of roasted beets, mainly because it was nothing like most roasted beet salads I see. This one called for preserved lemon, which I happened to have in my fridge.

Koenig says she learned from Jewish cooking expert Joan Nathan to always have a jar of preserved lemons in her fridge. How they brighten up just about everything. In this case, roasted beets are tossed with fennel, capers, basil and the preserved lemon rind, and tossed in a vinaigrette of lemon juice and shallot.

This salad was a revelation; we all gave Koenig the highest praise for coming up with this combination. Miriam said that when she saw the green flecks, she thought it would be mint, and liked how surprised she was that it was basil. “Amazing,” she said, followed by, “I would make this all the time.”

Adam noticed that it was unlikely to get every ingredient in one bite, which happily made each bite a bit different.

Both Adam and Paulie appreciated how the sweetness of the beets pulled the taste in one direction, while the sourness of the lemon and capers pulled it in another. I found the whole flavor combination unexpected yet brilliant.

I admit that while I was making it, I worried that the proportion of preserved lemon rind was off and that the three tablespoons called for would overwhelm the salad, as a little of this stuff goes a long way. I was wrong. This one is truly a keeper.

For dessert I made a pear cake, in which sliced pears are layered between batter and topped with a pecan-cinnamon mixture. To make the cake Passover-friendly, it’s made with matzo cake meal, which is not available now, so I used all-purpose flour — it was February, after all. Suitable for a meat meal, the cake is made with oil rather than butter.

Miriam said it reminded her of so many apple cakes, but was better in that pears are more sophisticated. She also liked the ratio of pears to cake; she thought it would be more of a cake with just a little bit of fruit, but the two layers of pears made the ratio of fruit to cake much higher. Paulie liked how moist it was, and said it seemed like a coffee cake. My one complaint about it was that it was baked in a square pan, which did indeed make it feel more like a coffeecake than like a celebration cake. I wasn’t sure I would serve it at the Seder meal itself; I probably would choose something a bit fancier. But that had nothing to do with the taste. (And upon reflection, I’m not sure why a square cake seems less impressive to me than a round one!)

Perhaps Miriam said it best when she concluded, “This makes me want to never make apple cake again.”

Alix Wall is a freelance writer and personal chef in Oakland, California, and the author of the blog The Organic Epicure.