How To Make Easy, Delicious Za’atar Chicken — When You Don’t Have Any Za’atar In The House 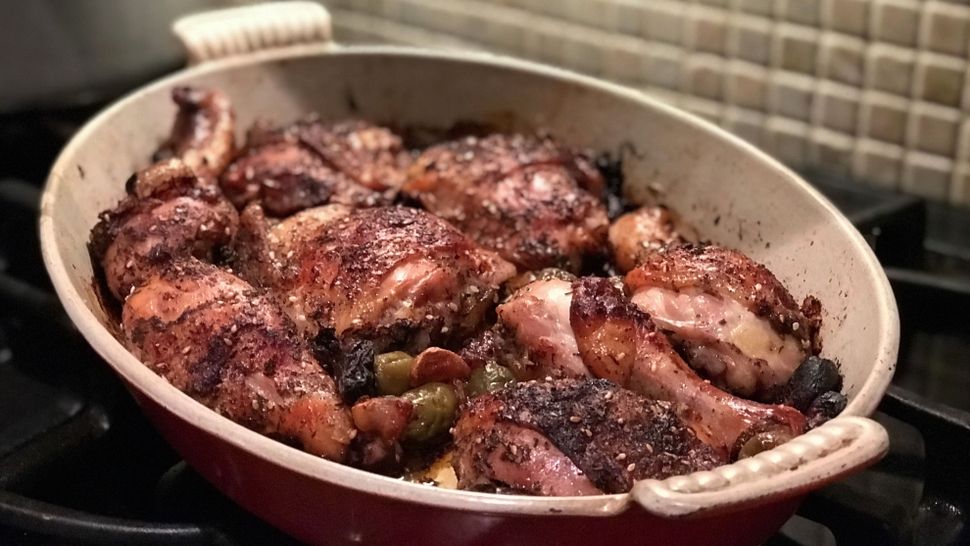 This dish involved less than 10 minutes of prep time before going into the oven. Image by Liza Schoenfein

It’s true. I made one of my favorite easy dinners — chicken with the Middle Eastern spice blend za’atar — even after discovering that I didn’t have any za’atar left. And even with the added time it took to make my own mixture (of course I’m going to tell you how), the chicken pictured above took less than 10 minutes to prepare, minus cooking time.

Za’atar has become a staple in my kitchen, as it has in home and restaurant kitchens around the country (and of course in the Middle East). There are different variations, but the most basic mixture involves ground sumac, sesame seeds, salt and either dried oregano, thyme or hyssop (a member of the mint family that’s plentiful in Mediterranean countries).

When I want to make really great roast chicken without any fuss whatsoever — as I did last night — I rub the spice blend liberally over the whole chicken or the parts, as the case may be, then drizzle on some olive oil and — depending on what I have in the house and whether I feel like adding one tiny extra step — I might toss in a handful of pitted olives, some dried apricots and/or lemon slices. (If you have any roasted garlic cloves in the fridge — Whole Foods sells them at the olive bar, and they’re easy to make in a 250˚ F oven — you can add those too.)

Za’ater lends chicken (or fish, or a head of cauliflower…) great color, texture and flavor. The taste is complex: sumac is a bit sour, adding what might be mistaken for a citrus note; the sesame seeds are nutty; the dried herbs are vegetal and earthy. Some blends have more salt than others, so I season with salt — or not — depending on how the mixture tastes.

So last night I had the chicken pieces all ready to go, arranged in my baking dish and waiting to be spiced, when I realized I’d used up all my za’atar. Now, of course I could have just rubbed the chicken with olive oil, salt and pepper and any of the spices or dried herbs in my collection (or none at all). But I wanted za’atar.

So I made it. The recipe is below, as is the za’atar chicken recipe.

By the way, I realize many people don’t have sumac or sesame seeds on hand, but these are worth picking up. (If you don’t see them in your grocery store, you can buy them from Kalustiyans or Penzeys — and if you’re interested in picking up a terrific version of za’atar — and other delicious spice blends — try La Boîte.

Yields enough for one whole chicken or 8 pieces

_I used a combo of thyme and oregano but you can just double up on one or the other if you like. My preference would be thyme. If you’re feeling fancy, you can blend the first four ingredients together (keeping it fairly rough) in a mortar and pestle or spice blender before adding in the sesame seeds. I didn’t bother. _

2) Arrange chicken in a roasting pan and sprinkle with half the za’atar. Turn the pieces over and sprinkle with the rest. Drizzle with olive oil and distribute it over the top of the pieces with a pastry brush or your hands. Scatter any additional ingredients (olives, apricots etc.) tucking them in a little among the chicken pieces.

3) Cook for 30–45 minutes, or until chicken reaches desired doneness, turning pieces once, after the tops become golden brown. (If the chicken doesn’t brown enough, run it under the broiler for a couple of minutes at the end.)

How To Make Easy, Delicious Za’atar Chicken — When You Don’t Have Any Za’atar In The House