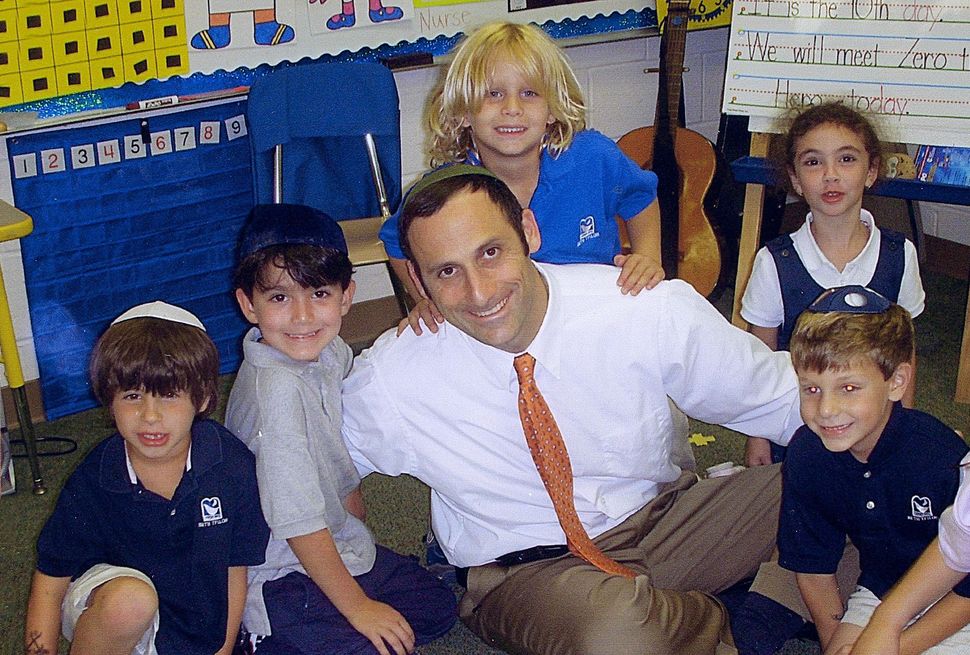 Abramovitz wasn’t sure how this would go over with the students since many of them hailed from Israeli or Russian-speaking homes, where synagogue attendance was infrequent and in some cases, non-existent.

He needn’t have worried; the students quickly bonded with the charismatic, yet down-to-earth rabbi, and some continued learning with him after graduating from the school, on Sunday mornings at the synagogue, the Hebrew Institute of Riverdale. 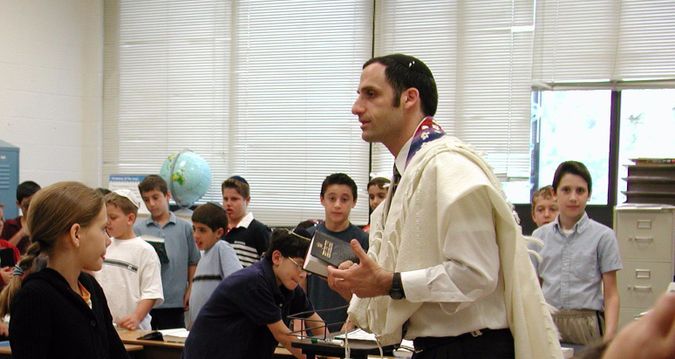 One graduate even called Frank up years later, asking him to officiate at his wedding in 2011. He did.

So how does he do it? Frank credits his own rabbi and mentor, Avi Weiss, the founder and rabbi emeritus of the Hebrew Institute. “One of the mantras I learned from him is that it’s always better to expose people to the beauty of Judaism than to impose it,” Frank explained. “I love yiddishkeyt to death, and I guess the kids see my passion.”

Beginning July 15, Frank, now 48, will be returning to Kinneret after a 16-year hiatus, but this time as head of the school, a newly formed position aimed at grooming him as the future principal.

“I’m not retiring,” Abramowitz was quick to add, “but I know that the sign of a successful leader is one who provides a successor. If, for whatever reason, I’m not around, we need to have someone who can run the school.”

The two will work together, but divide the responsibilities. Frank will deal with the day-to-day aspect of running the school, while Abramowitz will do more advocating for Kinneret, working with alumni and managing the budgetary details. “I’m going to give him more and more space to do his own thing, and maybe in seven years – I’ll retire,” Abramowitz remarked.

Kinneret, a school with close to 300 students, continues to draw students from a variety of Jewish backgrounds, and is currently embarking on a much-needed expansion, including a large new lobby, an auditorium, several additional classrooms and bathrooms. Construction begins in March 2016 and should be finished by the beginning of the next school year, Abramowitz said.

After many years away from Kinneret, Frank declared that he’s “tremendously excited about this opportunity” to work at the school which, he believes, “combines academic excellence with a warm, nurturing Jewish environment.”

Frank, who has smicha, or ordination, from Yeshivat Chovevei Torah, is a graduate of the Jerusalem Fellows program at the Mandel Leadership Institute in Jerusalem, as well as of the Principals’ Center at Harvard Graduate School of Education.

This isn’t Frank’s first experience heading a non-Orthodox day school. For twelve years he worked at Beth Tfiloh Dahan Community School in Baltimore , serving as Lower School and then High School Principal where the majority of families weren’t observant. “I enjoy this engagement because it allows me to see Judaism through different lenses,” he said.

“Honestly, I don’t believe in this concept of ‘Oh no, he stopped observing shabbos, what a failure! He stopped wearing a kippah, what a failure! Married a non-Jew, what a failure!’,” Frank explained. “Of course, we’re all naturally wired to feel validation when other people do what we do, but part of our challenge is to get over that inclination.”

Frank’s own family is itself religiously diverse. His maternal grandfather was a scholarly Conservative rabbi whose teacher was Rabbi Mordechai Kaplan, the founder of Reconstructionism, and his grandmother grew up in Williamsburg. His great-uncle is a Reform rabbi, while his brother lives in Boro Park, surrounded by ultra-Orthodox neighbors. “My family is committed to meeting every relative in whatever space they are,” Frank stated, adding: “I myself went to a community day school as a child, and none of my friends were observant.”

Although he didn’t grow up wanting to be a rabbi, he fell in love with learning and teaching, and says that his father, a now-retired children’s dentist, did a tremendous amount of hesed, or acts of compassion, that influenced him greatly. “Lots of his patients were underprivileged minority kids on Medicaid, and often when I’d go to my dad’s office, he’d be down on the floor with some kid who was afraid to go to the dentist chair,” Frank said.

One of the first projects Frank plans to initiate at Kinneret is a professional development program for his teachers. When he was principal at Beth Tfiloh, he organized it around the concept of empathy, or as he calls it, “getting into our kids’ shoes”. One activity he led was to have each teacher actually shadow a student for a day. A substitute teacher was brought in so that the regular teacher could sit among the other children, and learn from the experience. He also asked his teachers what kind of students they themselves had been as children, so that they could understand how this might have influenced their own attitude and behavior in the classroom.

Although Frank felt he had a good rapport with his students at Beth Tfiloh, there were times that the peaceful atmosphere at school was challenged. A fourth-grader once used a 4-letter word repeatedly in the classroom (Frank doesn’t recall if this was towards another student or a teacher) and Frank felt he had to address the issue in the strongest possible terms.

“I’ve never used the word ‘suspension’ but I called him over and said: ‘You need to take a couple of days off from school. This is a holy community, and we have a certain balance here. When people act this way, it upsets the balance.’” The child was angry and began to cry. Even his mother burst into tears as she and her husband tried to convince Frank not to suspend their child. But Frank held his ground. “I’m meshuge ledavar about being a mentsh,” he says now. “I just don’t buy into the idea that cursing is an everyday thing, and that we should just accept it.”

On the other hand, Frank felt that he needed to be there for this child, as soon as he returned to school several days later. “I made sure to be at the door, I put my arm around him and said: ‘I’m really glad to have you back.’ I could tell that this was a symbolic awakening for him, that he now understood that he had a rabbi and religious teacher who holds him to a high standard.

“That day it all clicked for me,” Frank said. “I knew then that this was the kind of teacher I want to be.”