120 Years Of The Forverts: How We Covered The Hindenburg Disaster 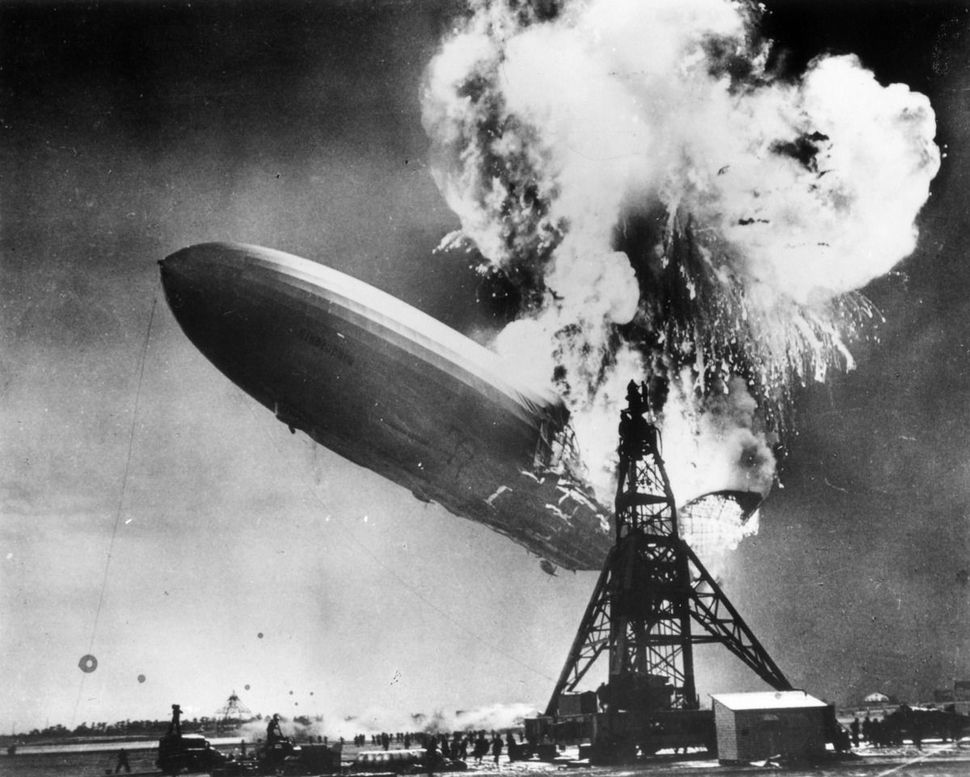 This article originally [appeared](http://yiddish.forward.com/articles/203879/-years-of-the-forverts-the-hindenburg-disaster/ “appeared”) in the Forverts.

Saturday, May 6, marked 80 years since the Hindenburg exploded while attempting to land in Lakehurst, New Jersey, killing 35 passengers, crew members and one man on the ground. Widely seen newsreels, along with the now legendary radio broadcast featuring Herbert Morrison crying while reporting the tragedy and screaming “oh, the humanity”, led the public to completely lose confidence in the craft, bringing about a sudden end to the era of commercial passenger airships. 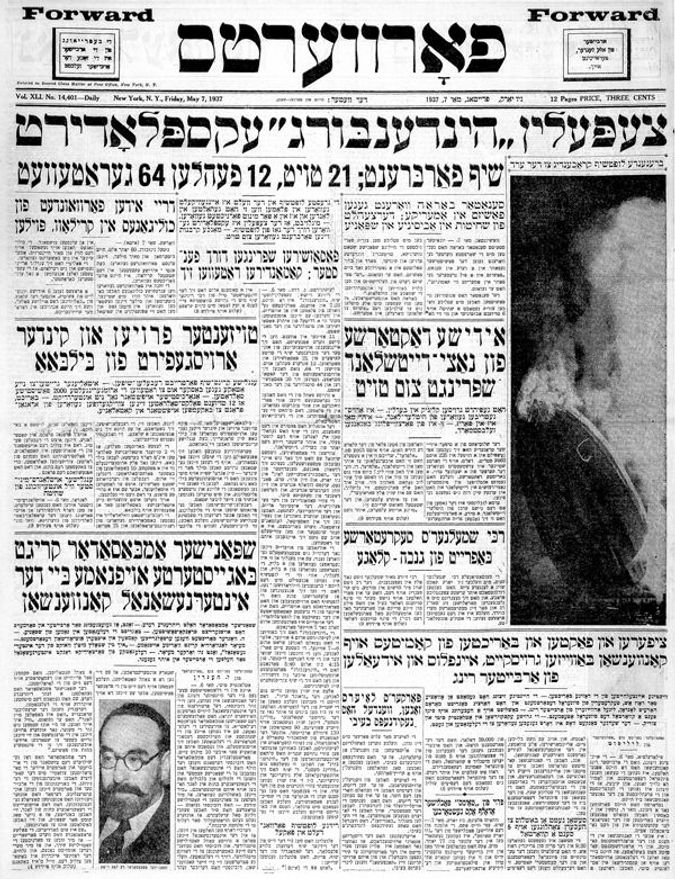 Until the tragedy, much of the public had believed that airships might soon surpass airplanes as the dominant mode of air transport. As is detailed in the long (more than 1,800 words) article that ran in the Forverts the day after the disaster, the explosion of the famous Zeppelin was a major blow for Nazi Germany. The airship, with its prominent swastikas on the side, was a symbol of the Nazi regime and its supposed ability to produce “indestructible” aircraft.

As the largest Jewish newspaper in the world, the Forverts needed to maintain a difficult balance. The paper had to relay the human tragedy and describe the terrible scene while explaining the impact that the incident would have on the Nazi regime, which by 1937 was understood to be the gravest threat facing the Jewish people in many generations. Although the Forverts conveyed the terrible tragedy with respect and professionalism, a contemporary reader will certainly recognize a bit of schadenfreude in the report, especially in the portion that describes how Germany touted the Zeppelin’s safety record and how the craft paused for a long time over the Jewish Lower East Side. There people could see its “hated swastika symbols,” which only a few hours later would be consumed by flames.

The following are several newly translated excerpts from the Forverts coverage of the Hindenburg disaster, which originally ran on May 7, 1937.

The massive German Zeppelin airship, the Hindenburg, was destroyed here today at 7:23 at night. The ship was consumed by flames after an explosion that killed more than a third of her passengers and crew.

As of 11 p.m., when the latest news was transmitted, rescue workers have managed to retrieve the bodies of 21 passengers and “air-sailors” from the wreckage of the burnt ship. Twelve people are currently missing. Among the 64 persons rescued from the catastrophe are 20 passengers and 44 members of the crew.

A large number of the survivors were so terribly injured and burned by flames that they needed to be taken to nearby hospitals.

The accident occurred as the ship was landing at the airfield at the end of her first trip this year from Germany.

Blue flames were suddenly spotted on the side of the massive ship. The ship’s commander, Max Pruss, screamed, “Lower the lines!”

Just a few moments later, the rear of the massive swastika-adorned ship struck the ground with great force. A loud bang was heard, and in a few short minutes flames engulfed and consumed the ship from all sides. From afar the massive ship soon resembled an enormous burning cigar. The flames illuminated the large airfield and reflected against the dark-blue dusk sky.

Passengers And Crew Leap From Windows

The passengers and crew began jumping from windows; some of them were aflame. Many of them managed to crawl out from underneath the ruins when the ship was knocked downward, and they fell to the earth.

The heat from the burning airship was so unbearable that many of the landing crew, who ran toward the wreckage to save the passengers and flight crew, received burns on their faces and had their hair singed.

After several minutes, only ruins and a burning frame remained of the glorious ship, which had been equipped with great luxuries.

The Hindenburg left Frankfurt, Germany, last Monday with 39 passengers and 60 crewm embers on board. The airship was supposed to have arrived in Lakehurst, New Jersey, at 6 a.m. yesterday, but she was delayed due to bad weather. She arrived in Boston yesterday at about 11:30 a.m. and flew over all of Manhattan, Harlem and the Bronx before turning around over the 50s in midtown and flying onward in the direction of Lakehurst around 4 p.m. The airship flew very low over the Lower East Side, where its despised Nazi swastika symbols tore at the eyes of onlookers below.

Among the passengers were many Americans and a few New Yorkers.

All of Germany is greatly saddened by the news of the Hindenburg’s demise. The Nazi government was especially proud of its enormous airships and boasted that only Germans could make such large Zeppelins safe and durable.

At first, officials from the Zeppelin Company refused to believe the news that the Hindenburg had been destroyed.

“It’s impossible. It’s a mistake. We just received a radio report from the ship that was sent at 7 p.m. and confirms that everything is all right.”

The disaster that befell the Hindenburg is a huge blow to the Nazi government. The Nazis told the world that only they were capable of building “safe” Zeppelins. They had pointed to the safety records of the Graff Zeppelin and the Hindenburg, which showed that these ships had completed voyages under all sorts of poor conditions and foul weather. They also noted that all the large Zeppelins that were built in America or other nations had been destroyed in accidents. They pointed to the catastrophes that befell the U.S. Navy airships Macon and Akron and similar tragedies that destroyed British and other foreign Zeppelins as evidence that non-German engineers were blunderers when it came to making airships. Just recently, while reporting on aerial disasters involving American airplanes, the Nazi press boasted that German airplanes and airships were the best in the world. They touted the safety record of the Hindenburg and the Graff Zeppelin.

120 Years Of The Forverts: How We Covered The Hindenburg Disaster