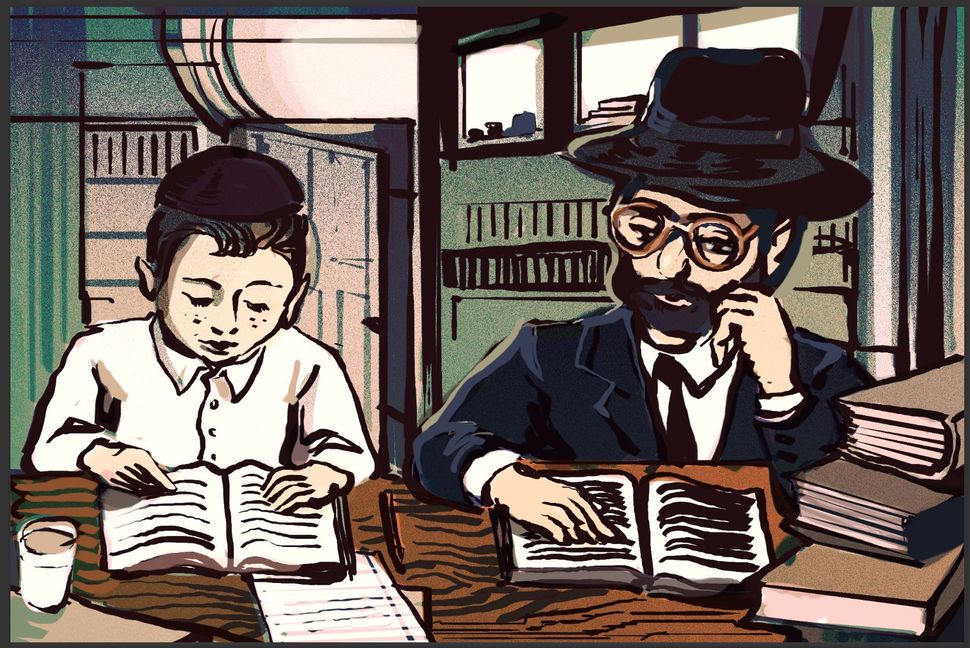 As soon as they settled at their table, Leah looked at him and asked: “What’s your father’s relationship with God?”

She sat facing him in some colorful thing, something fuzzy it seemed. His eyes roamed the room and then settled back on his tea mug. But now with this surprising question, his hands which had been wrapped around his mug, broke apart. “Excuse me?”

“Yes, with God. What kind of relationship does he have with the Eybershter?”

This question made Yankel angry though he couldn’t say why. He never thought about this. Maybe because he didn’t think much of the Eybershter as she called Him at all. He felt humiliated.

“I suppose it’s a legitimate question but…” Yankel stumbled, grasping for words and then somehow found them: “I believe for my father, Israel, the State of Israel, is his God. ”Yankel was surprised he was saying this. “Eretz Yisrael Shleimah,” Yankel went on. “The Greater Israel, the shtachim, the settlements, young men with tanks, guns, with flying tzitzit, tefillin, Nimrod sandalim… this is the God of my father.”

Yankel looked broodingly into his tea mug. It never before occurred to him in such stark terms, that his God and the God of his father were not the same. In fact, they were very different.

Leah fell silent and fidgeted with her purse. She looked abashed as if to say, had she really asked that question? Had she really gotten that answer?

Leah excused herself to the washroom, but he noticed that she went to the payphone. Who would she be calling up, some kind of cupid, a confidante perhaps? Women were inscrutable. He hated himself for caring so much what was on these girls’ minds. It was a kind of torture. Thoughts of recent dates came to him. All of them humiliations; one after the other. There was Mindy just last month who told the matchmaker that he was “a good guy” but that he ran the date like a Keystone cop. (So what if he forgot his keys at the restaurant and had to walk back a few blocks?) Then there was Yocheved a week or two ago, who kept asking him why his mother was so old when she had him. “Forty is not old,” he nearly snapped at her. Word got back to Yankel that she told the matchmaker that he was “testy” and “crabby.” It’s true that women could bring out impatience and surliness in him, but were they such angels? And yet now with Leah, even as he felt uncomfortable by the conversation, he was, strange to admit, comfortable with her.

He watched as she hung up and returned to the table. He noticed how she smoothed her dark hair. Her hair was beautiful. To him it looked like a surfer’s wave.

“That was a pretty neat question,” Yankel said in a way that surprised him, and for the first time he looked at her directly across the table. “I liked it very much. Why don’t we take a walk? I think it stopped raining.”

Barely two hours after he had first come to Leah’s door, Yankel parked the Buick in front of her house. During their time at the restaurant and their walk, what had happened? All they did was talk of this and that but something had changed, something was happening between them. He could feel it like a cold or a virus coming on, but in this case it was the opposite – something good. He struggled to discount it; feelings like these only fizzle out on the runway of desire before it could take off. He suddenly felt a desperate need to keep this feeling going, to nurture it along. But how?

“I had a nice time,” Leah said in a hesitant voice as they walked up the steps to her door. He wanted to say something, but didn’t know what.

The next morning Yankel woke up with uneasiness. He didn’t know what to make of what happened. Why on earth hadn’t he said the truth: He did have a good time! Maybe he did need to see a psychologist. It was the 20th century after all. A man had where to go to feel better or at least to set himself straight. Mostly though, he felt ashamed for his incompetence.

It was Sunday morning, still Chanukah. Much of the yeshiva had gone away, but where did Yankel have to go? To a mother living on Bay 8th street in Bensonhurst in a tenement that smelled of yesterday’s supper; dull fluorescent lighting in the hallways, an elevator with a round window and big black buttons to push? By this time on Sunday mornings, one could see a procession of elderly and not-so-elderly people shuffling along with their laundry carts, a plastic jug of liquid detergent nestled on top of the laundry headed down to the room in the basement with the washing machines and dryers. In the lobby of the apartment building would be an electric menorah with orange bulbs next to a Christmas tree and a light-up Santa. No, it was better to be learning Talmud in the study hall, in the bais medrash… any bais medrash.

Even though Yankel was still a bokher, a single man, he had a seat at the married men’s table at breakfast – a sign of the esteem in which he was held. Although he did not give full-fledged Torah lectures, he did lead an informal study group. Today, there were few people even among the full-timers. It was Chanukah break, after all. He decided to skip the special French Toast Chanukah breakfast. Instead, he grabbed a hard-boiled egg and went straight to the Talmud.

One of the younger students in the bais medrash, an illuyi, a whiz kid, came over to Yankel. “Let me learn with you this morning,” he said. “There’s no one here.”

He couldn’t have been more than fourteen, but one look at him and you got the feeling that the world of learning Talmud was created especially for him. Not only did he have a sharp mind, but he looked like the best of the pre-Holocaust Roman Wishniac photos – cheeks round as oranges, and freckles sprinkled lightly under his eyes like frosting.

There they were: the oldest guy in the bais medrash and the youngest – in the empty room; around them books piled high – the Ran, the Rosh, the Shulchan Aruch, medieval explicators of the Talmud. They began discussing the question whether doing one mitzvah exempts you from doing another. The boy had nicknamed Yankel the “snow plow” as Yankel moved through the Talmud thoroughly and with all deliberate speed like an ice-breaker in the Northwest Passage.

An hour or two passed until they went downstairs to munch on jelly donuts set out in honor of Chanukah. Slowly, though, Yankel’s feelings of desperation returned and the morning’s enthusiasm waned, at first slowly, then more rapidly. Later that night, Yankel was again in the grips of an agonizing loneliness when the shadchan’te called.

“I haven’t heard from you,” she said flatly. “I didn’t know what to think.”

“It was a strange experience,” Yankel said.

“Did you feel like continuing your conversation with her?”

“I don’t know. She’s very smart and resourceful…she knows how to fix windshield wipers.” This part he threw in for want of anything better to say.

She chuckled. “So what’s the matter?”

He paused, swallowing, his mouth dry. He could still taste his hard-boiled egg from breakfast. “I felt like an idiot. I didn’t know what to say to her at the end of the date.”

“Shall I tell her then to move on? I can set her up with someone else.”

He felt a quickening inside him. “No, tell her…tell her I’ll call her tonight.”

It was with a mixture of dread, self-coercion, and dare he say anticipation, that he again dialed the number. This time, Leah answered. “Hello?”

He tried to picture her but for the life of him couldn’t remember how she looked. A flash of pale skin, dark hair, brown eyes, or were her eyes green? How could a man sit in front of a woman for two hours and not remember her face? He had a moment of panic and papered it over with a formal tone by wishing her a happy Chanukah: “A freylekhn un likhtikn Chanukah.”

“Oh my goodness, you sound like my father with your Yiddish! Where did you learn to speak it?” she said in a bright voice.

“That’s just the way I way I speak, with a little Yiddish here and there.” If she only knew the rest of what was inside of him, thought Yankel. How tormented he was by his thoughts!

“But your words sound so nice!”

“I don’t know much. If we get to know each other, you will find out. Speaking of which,” he cleared his throat, “are you available this Motzoei Shabbes?” Saturday night was a big time dating night. He hoped he had given her enough notice.