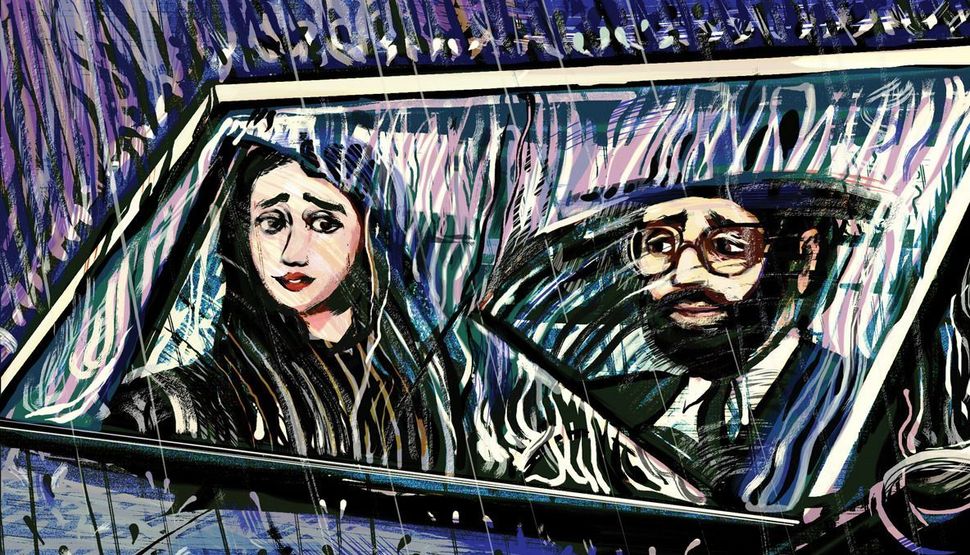 And so after some perfunctory small talk, an appointment was arranged. Yankel would meet with someone called Leah Spielman (he scribbled this into his small appointment book), daughter of Abe and Helen Spielman, refugees from the Old World, now living in Flatbush. “Appointment” was how Yankel’s Rosh Yeshiva, the dean of the rabbinical academy, used to call it – never a date. A ben-toyre, a Torah scholar, doesn’t go on a date.

Two days later Yankel held the piece of paper with her address in his hand. It was a drizzly Saturday night, just after Shabbes, and Yankel borrowed his friend’s car –- a Buick station wagon with grease-stained upholstery and jumper cables in the back. Yankel felt somewhat ridiculous driving this behemoth, but it was better than taking the bus. It offered protection from the cold and the rain, and they could go to nearby Weiss’s, a familiar dairy haunt in Flatbush or some other such place for tea. For driving a car like this, one could be forgiven, Yankel assured himself, as he buttoned his jacket and walked up the steps to ring the doorbell.

Spielman, the father, answered the door. He was a short man, clean-shaven, still in his Shabbes suit, but having taken off his tie. On the dining room table Yankel could see the remains of Havdalah: the burned-out stub of a twisted candle, a half-empty silver goblet, and a bottle of inexpensive Kedem wine, that had been used to mark the end of the Sabbath.

“Gute Vokh,” Spielman greeted him, with the customary wish for a good week.

“A Gute vokh un a gut yor,” Yankel answered back. A good week and a good year.

“So from where did you come?”

Spielman led him into the living room. Yankel took in two armchairs covered in protective plastic and a bowl of candy and fruit on the coffee table. Yiddish newspapers were neatly placed over one of the chairs, with a pair of bifocals on a chain resting on them.

“So, from where are you parents?” Spielman asked.

Yankel hated that question even as he knew it would always come. He understood it wasn’t so much informational as it was a way that both he and his father and his family could be placed in a shnit, a familiar category. And, in fact, his father couldn’t be placed. His father was born in Luboml, a small Polish shtetl, but at the age of two came to the United States. He had not a trace of an accent and was Americanized in every way — he’d gone to a well-known American yeshiva, then was drafted into the US Army, worked for the public schools — except in the manner of his ardent Zionism. Yankel’s father’s obsession with the land of Israel and his obsequious devotion to a progressive brand of Orthodox Judaism was a constant source of embarrassment to Yankel. In fact, as of this hour, his father was in Israel, probably on a moshav, some cow-milking collective in the hills of Judea, listening to someone playing the guitar. His mother, long ago divorced from his father, lived a small life in an apartment in Bensonhurst. None of this was a pleasure to talk about.

Spielman seemed to take a second to comprehend this.

There was a light noise, footsteps on the carpet, coming from above. The two men looked at each other; as if in silent agreement to let the conversation die a natural death. And just then Leah came down the stairs.

Yankel in his self-imposed modesty looked slightly away, but even in this half-second of non-looking, it was as though he was brushed by the faintest of sound waves; as far as he could make out, a positive vibration.

“I will let you two go,” Spielman announced hurriedly and motioned to leave. He turned slightly to say, “It was good to meet you,” as he went up the stairs. Yankel bent slightly and nodded in return.

And so the two went out into the light rain together.

Yankel made sure to open the car door on Leah’s side. Oddly, although the car was ancient, it was advanced for its time. It had power windows, but owing to its age, the driver’s side didn’t work. Yankel was nervous. A simultaneous feeling of dread and anticipation dug in. It was all he could do to concentrate on the road while the cold rain got heavier. The windshield wipers valiantly struggled to do their job, but they were worn and ineffective, streaking and smudging the window rather than wiping it clean.

“Oh my goodness, how can you see?” Leah said. “Do you want me to go out and clean the blade? I know a trick!”

This jolted Yankel. A woman who knows how to clean a wiper blade! He barely knew how to put a key into a lock. “Please don’t trouble yourself, I can see just fine,” he said, horrified at the thought of his date doing roadside assistance in a winter rain.

“You sure you can see?” she asked timidly.

They rode on in silence except for the futile sound of the incompetent windshield wipers. Even without looking directly at her, he could sense her disquiet in the car. Clearly, she was in deep thought.

“What’s a girl to do?” she said aloud. “Should I let myself be killed for the sake of a man’s pride? Especially for one I’ve known only five minutes?” She paused. “You know what? I’m perfectly willing.”

Yankel was startled, but within a few seconds, he got it. He pulled the car over, got out and wiped the windshield clean with a rag from the cargo area. Sheepishly, he said, “Do you really have a trick for the wiper blade?”

“I sure do,” she said. “First, you have to use a clean tissue,” and she took a few from a pocket pack inside her purse. “Then you slowly squeeze it against the blade twice like this. It gets the gunk off the rubber.”

They both got back in the car and Yankel resumed driving, the windshield now completely clear. “This is what they call starting with a clean slate,” he said, although he wondered: What else did she do better than me? Learn a Rashba? A ketzos? Or even more obscure Talmudic commentaries than that?

“How do you know Miriam the shadchan’te?” Leah asked. This was a standard question, but irritatingly banal. After politely answering, Yankel felt compelled to fire back with a banality of his own. “How long have you lived here?” A question that was dead on arrival because he already knew the answer (Miriam had told him).

“Your father is a greener?” Yankel asked, giving it another try.

“A survivor?” he bleated, almost certain that he was. He turned the big car onto Ocean Avenue.

“Yes and no. He was in a labor camp in Bessarabia, then in a concentration camp for a short time. Somehow he managed to escape to Curacao. It’s very confusing to me. This is how he got into the cap business — in Curacao.”

“What school did he send you to?” Yankel felt obliged to ask, already sensing the need to keep this falling kite aloft.

“The usual boring ones: Bais Yaakov for elementary school, Prospect Park for High School… I didn’t start to really apply myself until I was in seminary.”

Yankel nodded absently. The car’s heating system begrudgingly sent a few warm vapors, and Leah loosened her scarf. “Who chose your yeshiva for you?” she asked.

“Actually, I did.  My father wanted me to go to a more liberal one like the Yeshiva of Flatbush or even MTA. But I wanted no part of this. My father’s an ardent Zionist, in a loud flashy way that has always embarrassed me.” He felt his cheeks redden a little. Why was he talking about his father, a sore spot if there ever was one and here he’d just met her? Yet, from the moment she’d fixed the wiper blade, he’d felt something might happen, that he might even say something new.

They had pulled up in front of the restaurant. They remained in the car, bathed in the restaurant’s fluorescent light. He turned to Leah, but didn’t look at her, yet he saw the contours of one side of her face shining like the glint of a half moon. Something about her face arrested him. He could feel the usual machinery that went on inside him come to a half-second halt, a blink, a chink — something stopped. He could feel it. Yet even as he noticed this, he nudged it into the back of his consciousness.