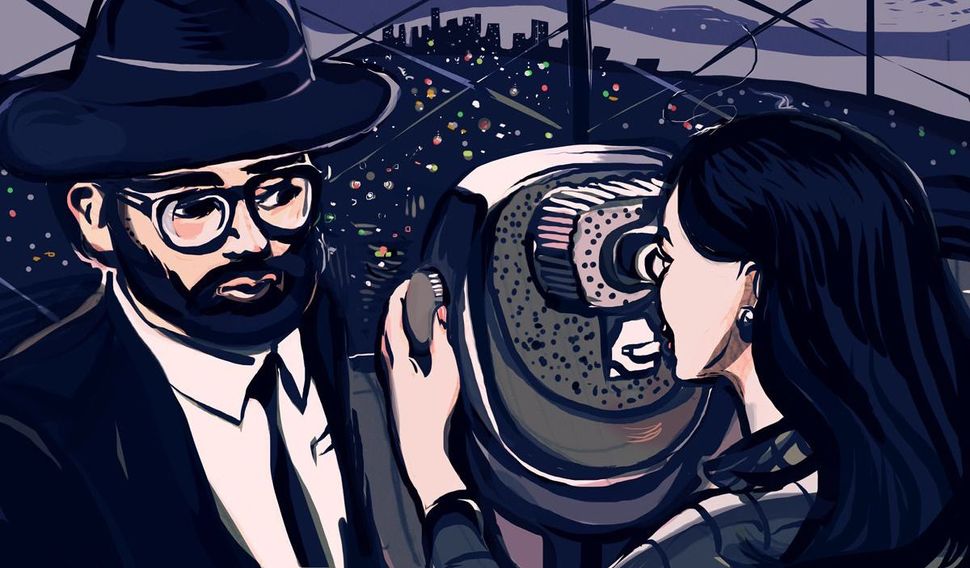 “Good,” he said, feeling an instant resistance to her enthusiasm.  “I’ll see you at eight o’clock?”

This time Yankel was able to borrow a different car.  It was an almost-new Oldsmobile 98 Regency.

“Beautiful car,” Leah said when he picked her up that Saturday evening.

Yankel was of course deeply embarrassed by it on account of its fanciness. His friend practically forced it on him. “Make an impression,” his friend said.  “It’s the kind of impression I don’t want to make,” he’d said back. Yankel was concerned about setting the right tone. What was the point for a poor scholar like he to prants arum – prance around in a fancy car. Some did, but it wasn’t for him. “Oh for Heaven’s sake,” his friend said. “Just this once,” he dangled the keys, “live a little.”

“It’s a late model,” Yankel begrudgingly conceded. In fact, Yankel was well aware that it was showroom new – 400 miles on the odometer. A brand new car. Anyone could see that.  It even smelled like a new car. Would it kill anyone if he came right out and said it?
Sensing his discomfort, Leah said: “Well, you must have good friends who let you use their cars.”

“There are people who want me to succeed,” he offered somewhat mysteriously.

“Oh,” she said, “I’m a little jealous. It’s great to have people who want your success,” Leah said and looked at him. She flashed a modest smile revealing small white polished-pearl teeth. To see them sent a fright through him.

“They don’t really want me to succeed,” he said. “They want the pleasure of seeing me succeed. That’s not the same thing.” Yankel stared a little too intently at the road in front of him as though afraid of going astray.

“That’s a deep idea,” Leah said. “They want the pleasure of seeing you succeed,” she repeated, “but somehow I don’t think that’s all there is.” Strangely, he didn’t feel the need to argue with her, as he did with every woman. Her words went down his windpipe and lodged themselves there. And then surprisingly, they seemed to dissolve warmly and settle in his stomach. This was entirely unexpected. He was, truth-be-told, a wreck with women, alternatively combative, or weak and uncertain and pedantic. He was ashamed of his ineptitude, but somehow this evening – a clear, cold moon and starry night whipped gently by wintry winds — gave him the faintest hope that he, things, might be different going forwa.
“You know, Leah,” he said, glancing out the car window. They were in the “ditch” now, the part of the Brooklyn Queens Expressway that dips down before rising to a glimpse of the polished lights of Manhattan one sees from the Brooklyn Promenade. “Your question last week about my father’s relationship with the Eybershter really threw me, but it also got me thinking.”

“I was just being silly maybe or provocative. I really didn’t mean to be, sometimes I can’t help it. I apologize.” Her head made a curtsy.

“No, you really have nothing to be sorry about. I think you were being serious. You don’t have to play the know-nothing innocent with me,” he said, lifting a hand off the steering wheel as if to wave away the thought. “You have a right to be serious, too.”

Leah nodded, as though she felt understood by that.  Perhaps this is exactly how she wanted to be seen: a serious person with just the tiniest hint of trouble-making.  It was still cold in the car and she buttoned up the top button of her coat.  She looked out the window.

“When do you think we’ll have the first snow this year?” Leah asked.

Yankel frowned.  What a banal question, he thought. “Why is this important?”  He asked with a touch of impatience.

“Oh, it’s just a game I used to play with my sister. Whoever had the closest guess would win the right to sit in the front seat of my father’s car on all family trips for the year.”

“Never. I always ended up in the backseat.”

“To win is not a very Jewish thing,” Yankel declared. “A Jew doesn’t win. A Jew does the right thing. That IS winning,” he said, but even as these words slipped out, he was already hating himself for having said them. He sounded pompous. He had valuable things to say sometimes, but he was aware that the world did not always see them as important and he could easily be seen as the buffoon. But at the same time he felt he had no control over this.

He dug in further. “Did you ever notice the happy faces of lottery winners splattered all over the New York Post and other shmatteh newspapers? A few months later you find out that their marriages fell apart; this one is not talking to the other. Such is the way of the Gentiles and the non-God-fearing Jews.”

“All the same, I like winning,” Leah said simply.

“Well,” he sheepishly confessed, “if it makes you feel better, I’ve never won anything.” She let out a light laugh that made him forgive himself for his earnestness.

By now they were on the Manhattan side of the Brooklyn Bridge. They seemed to glide over every bump and pothole in the new Oldsmobile. It felt like a chariot.  He saw it had not passed Leah’s notice that there were wire-spoke hubcaps and silver mud-flaps. (She had given them a lengthy side-long glance before they got in the car.)

Yankel adjusted the brim of his hat. “Leah,” he said. “Perhaps you’d like to go to the Empire State Building, to the observatory?” Again, he listened to the way he sounded, and cringed. Why was he so formal?

Leah answered him in kind. “I would love that. I’ve never been there.”

It was a popular night spot and the elevator was crowded as it rocketed toward ever-higher floors. He tried not to study her so he did so from the side, when she wasn’t watching. He struggled. A man must be able to look at a woman, he thought finally. She was not displeasing. Her coat was a soft blue, fashionable, but not too fashionable. Her face had a brightness to it. Good complexion, he thought. This was all he would allow himself to discern. Even still, he was aware that something inside him blinked, like a lightning flash.

On the observation deck the world in every direction – north, south, east and west – seemed to unfold in twinkling lights the color of red, amber and burnt orange. Yankel fished a coin out of his pocket and dropped it into the binoculars.

“Take a look,” he said to Leah. The island of Manhattan seemed like a world unto its own, an electric world, but not dangerous now.

“I could look at these lights forever,” Leah said, turning away from the binoculars and looking back at him.

Yankel nodded in mild agreement, and then put his face into the binoculars, but abruptly stopped.

“There’s still time on the quarter,” Leah said, “why waste it?”

“It’s beautiful, but I’ve seen enough,” Yankel said. In truth he couldn’t look at anything for too long. This is how he later explained things to the shadchan’te: One looks quickly and then turns away. If one looked at anything too closely, too long, a person could go insane. Could one stare even at a Van Gogh or a Picasso forever? There was a tale in the midrash about a near-sighted man who prayed for good eyesight, but then he saw every pore on his wife’s face, every blemish on his children and on the food he ate, and he prayed for God to take away his acute vision.

An interesting story, perhaps. But still, it was strange that afterward, when he was back in his dormitory room, going over the evening in his mind, he could not even remember the color of Leah’s eyes. He might have trouble recognizing her from a photo even after meeting her twice. It was a good thing not to look, though. The only thing that could be looked at forever, were the stars and the sky and the Talmud.