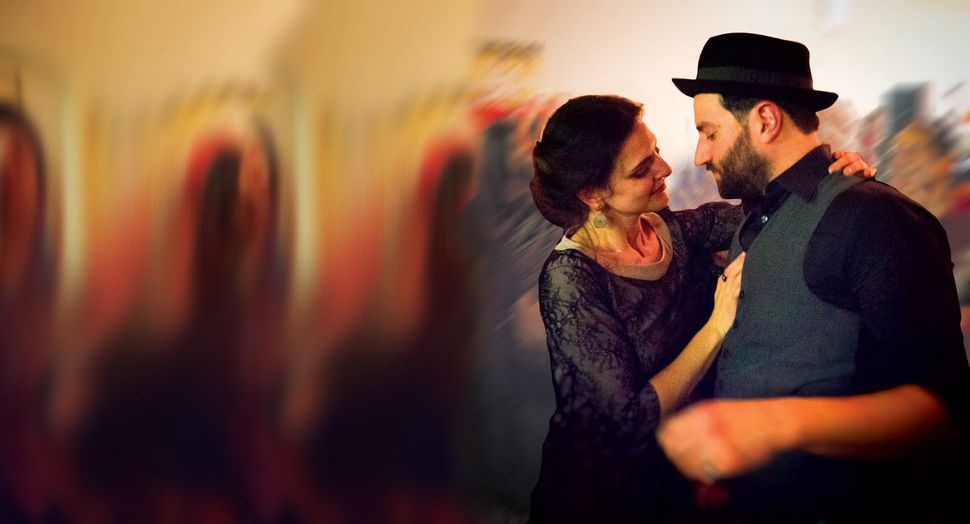 In the traditional Jewish betrothal ceremony (called tnoyim in Yiddish), the bride and groom barely play a role. The parents of both sides draw up a document detailing all the prenuptial conditions; the parents then sign that document, alongside two “kosher” witnesses.

But at the recent engagement ceremony for klezmer musician Daniel Kahn and his bride-to-be, Eva Lapsker, the couple presented their own modified tnoyim. Standing before approximately 120 “witnesses” on December 23, at the Sirovich Center on 12th Street in Manhattan, the bride and groom each pledged what they were bringing into the marriage.

“I’m bringing my five typewriters, including a Hebrew and a Yiddish one!”

The applause and laughter that followed proved that their updated version of the tnoyim ritual resonated with the onlookers, who had come to the Sirovich Center to take part in the the opening dance party of the third annual klezmer festival “Yiddish New York”.

Kahn, who was born in Detroit and has spent the past 12 years in Berlin, is the founder and lead singer of the band “Painted Bird.” A Forverts video in which he performs his Yiddish translation of Leonard Cohen’s “Hallelujah” has gotten over 685,000 hits since its release in November 2016.

Lapsker, a translator and dancer, was born in Leningrad (now St. Petersburg) but was raised in cities throughout Europe.

Although they both live in Berlin, the couple chose Yiddish New York as the venue for their engagement celebration. They knew that many klezmer musicians and other friends of theirs would be attending. No less importantly, they wanted their mothers, Marcia Kahn and Marina Lapsker, to be a part of it.

The couple met two years ago at the Jewish Museum in Berlin. “My relatives insisted that I go to the opening of an exhibition there,” Lapsker told the Forverts. “Suddenly I saw this young American musician – Daniel – singing his English translation of a song written by my favorite poet, Bulat Okudzhava. I consider Okudzhava a deeply Russian poet. As a translator myself, I had the sense that Daniel really felt the soul of the songwriter, touching something deeper than the Russian or American soul; he touched the human soul.”

As she learned later, Daniel didn’t even know Russian.

“After that, we kept bumping into each other all over Berlin,” Kahn said. “It was bashert…”

Since then the couple has helped launch annual Berlin Yiddish klezmer festival “Shtetl Neukölln” and Lapsker has begun studying Yiddish.

About an hour before the engagement ceremony was set to begin, Kahn and Lapsker snuck into the service elevator and took it up to the roof. There, in the last quiet moments before the event, he gave her an engagement ring.

As soon as the “guests” filled up the hall, Yiddish folksinger Sarah Gordon stepped up to the microphone and introduced the newly engaged pair. She called up their two mothers, who recited a poem — by Okudzhava, of course. Marsha Kahn recited a Yiddish blessing composed by songwriter and filmmaker Josh Waletzky.

After the couple pledged their contributions to the marriage (some were written up beforehand; others were improvised on the spot), they sealed their engagement with another updated ritual: The breaking of a plate. Traditionally, this is done by the two mothers-in-law-to-be. Here, it symbolized their first official act together as a couple.

The plate they used had added significance since it once belonged to Adrienne Cooper, the late singer and scholar of Yiddish song with whom Kahn had worked closely.

Sarah Gordon, Adrienne’s daughter, was thrilled to have the couple use a plate of her mother’s. “She bought this in Italy back in the 1970s,” Sarah said. “Fleyshik.”

The rest of the evening, Yiddish folk dance expert Jill Gellerman led the crowd in the traditional folk dances that, for centuries, had been an integral part of Jewish weddings in Eastern Europe.

“I’ve often thought of how those of us who work in the Jewish culture world find ourselves in a strange gray area between the public and private sphere,” Kahn later remarked. “Carrying out the tnoyim ceremony at Yiddish New York was not a performance at all. It felt more like we were collectively creating both culture and community.”

This wasn’t the first time that a couple has carried out a Jewish ceremony at a klezmer festival. In 2016, Latvian musician Ilya Shneyveys and American cantor Sarah Myerson were married under a khupe at Klezkanada, providing a wonderful opportunity to teach the “guests” traditional wedding songs, to perform klezmer music during the badekn, the bride-veiling ceremony, and to dance the traditional mitzve-tants.

Perhaps signifying a harbinger of things to come, the badkhn, or Jewish entertainer, at that klezmer wedding last year was none other than Daniel Kahn himself.