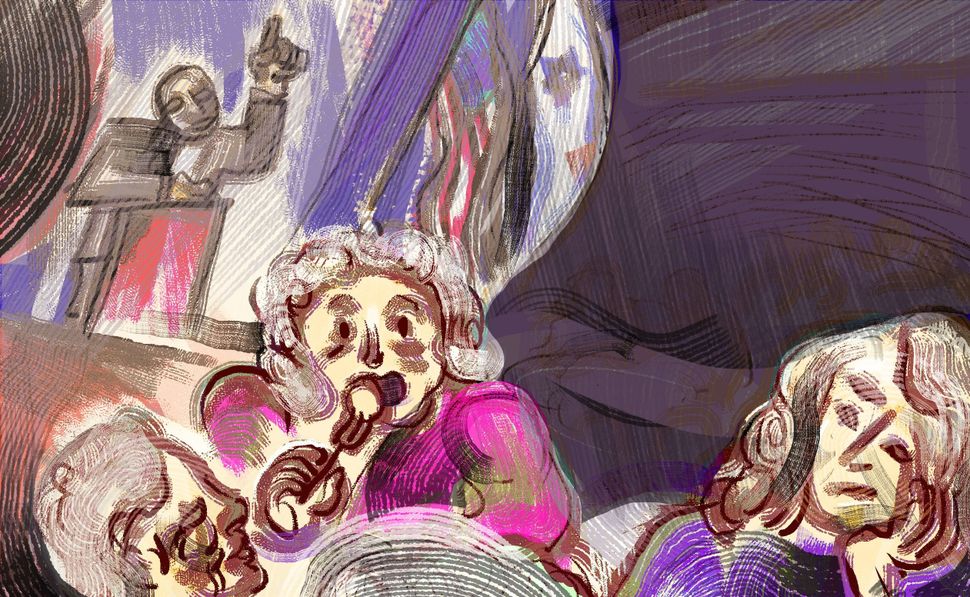 So when I heard about Cafe Europa, I thought it might be a good idea to go.

Cafe Europa is a social luncheon for Holocaust survivors supported by the Claims Conference. The name comes from a cafe in Stockholm, Sweden where survivors would meet after the war to try to find family and friends. Here in the US, Cafe Europa events takes place all over the country. After hearing that one was taking place in my area, at the Bnei Torah Congregation in Boca Raton, Florida, I decided to experience it myself.

So I went, but returned home with a heavy heart.

When I first arrived, I saw several hundred survivors sitting at linen-covered tables. Each table was assigned to the land of their birthplace, including Poland, Czechoslovakia, Rumania, Lithuania, Latvia, Hungary, Germany and Austria. Needless to say, each of these countries had a hand in our destruction.

As I walked around the room, I heard all the survivors speaking the language of their country of birth, or English.

At my table it was Hungarian, so I turned to my neighbor, an elderly gentleman, and asked him: “Does anybody speak Yiddish at this table?”

The answer came swiftly, in a broken English: “Nobody speaks Yiddish. Where I come from, we only spoke the language of the country.”

I doubted whether this was true, since my late husband had come from the same area this man did before the Holocaust, and everyone there spoke Yiddish.

We were interrupted by an announcement asking us to rise and sing the Star-Spangled Banner, followed by the Israeli national anthem, Hatikvah.

At one point during the meal, I heard someone speaking at the podium, garnishing his lecture with empty Hebrew phrases: “Tsiyonut… Khazanut… Galut… Torah…Avot” but no one was listening; everyone was busy eating.

And then it struck me: Cafe Europa had brought together a room full of Jewish survivors, yet it had no “Yidishn Taam,” no Jewish flavor. No one sang any Yiddish songs, or Hebrew songs; it was a Jewish luncheon devoid of all Jewishness.

The thought that hammered in my brain was, who were the people responsible for planning this function? Didn’t they realize that seated at each table were men and women who had survived the Nazi genocide? Each one had a story to tell. Why couldn’t some of them share those stories with us? It didn’t have to be one of the horror stories; maybe just about their experience coming to the Golden Land, being showered with friendship and acceptance.

Someone could have delivered a talk about who we are as a people, provide a glimpse into our rich culture and history. Instead, the emptiness in the hall was louder than the stormy weather pounding outside.

Did no one there know the work of our great Yiddish poets and writers, whose books about our destroyed world could fill entire libraries?

The speaker could have read us a poem by our own Shakespearean poet, Avrom Sutskever, like this one:

Don’t tell me about good Germans
All I’ll do is gag
I can hear our Hebrew letters weeping
They flicker as they sag
I’ve seen how good Germans
Murder while playing
On their silver flute
While at the same time
Getting ready to shoot.

Don’t tell me about good Germans
If there are any, they’re all alone
Why don’t they try to simmer down
And taste their own Zyklon. *

Instead the hall was silent, save for the sound of forks and knives. The air itself felt emptied of Jewish knowledge, of Jewish culture, of Jewish essence.

The speaker could have read us several lines by our brilliant, beloved minstrel, Itzik Manger:

God the Almighty is great
Just like in days of old
Not because He thunders in Heaven
But because he weeps in the valley.

Or he could have shared some words by our greatest Yiddish poet and writer, Chaim Grade, about his mother who had been murdered by the Germans:

She is small, she is thin,
And hardly reaches my shoulder –
Although in her grief,
She outgrew me, she’s bolder

O, Mamele, grey dove of mine-
With eyes full of fear and so humble,
The wind and the darkness
surrounds me –
Like an infant I lull you and mumble:

I hear from afar her wailing,
“My son, bare it all! Live, survive!
I count the wrinkles on her face,
“Mother, do not die of longing.”

Yes, the loss our survivors experienced is unfathomable, but good food won’t satisfy their hunger or heal their deep wounds. Let us help them reconnect with their Jewish roots; teach them what we Jews accomplished as a people and what kind of heritage we are leaving for our children and grandchildren.