From The Forward Archives: A Very Yiddish Valentine’s Day 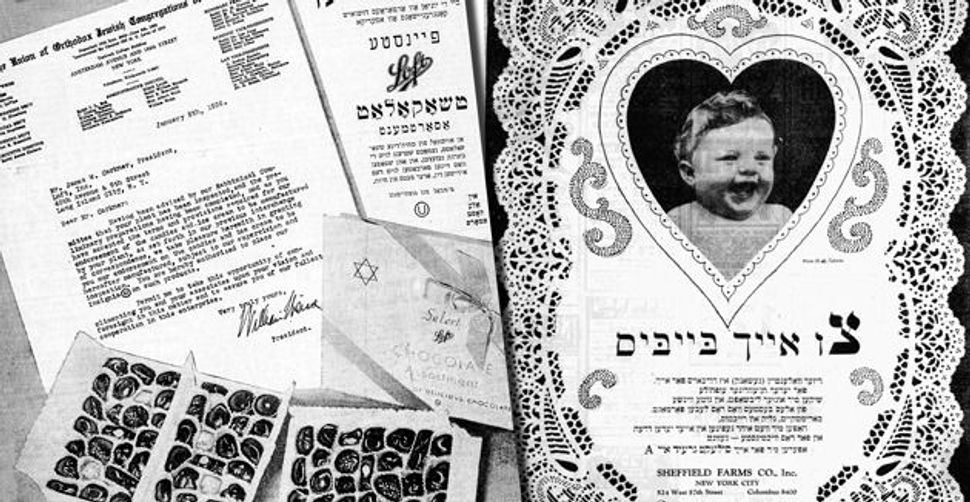 It’s not a secret that the Forward historically promoted Jewish assimilation into broader American culture, encouraging its readers, among other things, to speak English, learn to make apple pie and play baseball.

Still, I was a bit taken aback when my colleague, Forward archivist Chana Pollack, showed me several ads the paper ran that were oriented around Saint Valentine’s Day.

It’s not surprising to find articles and stories in the Forward about secular American holidays that would have been unfamiliar to recent Jewish immigrants. Thanksgiving, for instance, was touted by the paper as an egalitarian celebration of American values in which its Yiddish-speaking readers could participate as equals. Valentine’s Day, however, despite being largely secularized in America, is a Catholic holiday that honors a third-century Roman Saint. As such, I had thought that it would have been beyond the pale for the typical Forward reader. As it turns out, Valentine’s Day was apparently kosher for the paper’s advertising department.

The February 14, 1928 issue of the Forward featured an ad in the form of a heart-shaped Valentine’s Day card touting the benefits of Sheffield Farms’s milk for babies. Undoubtedly translated from English into Yiddish, the ad serves today as a textbook example of why translation not only involves translating words but also making foreign cultural concepts accessible to readers of the target language. The idea of a Valentine’s Day card was so foreign to Forward readers that the ad describes such a card simply as a geshank, or gift. Readers who were better acquainted with American culture would have understood that the heart-shaped greeting printed in mid-February was part of a Christian holiday tradition. Those who were less Americanized would have recognized the heart symbol as a sign of love but would not have understood the special meaning of such a card in broader gentile culture.

Better suited to Jewish life is an ad by the chocolate makers LOFT, which displays several trays of candy. Although the ad was published on Valentine’s Day in 1936, the holiday itself is never mentioned. The ad does, however, prominently feature a kosher certification stamp from the Orthodox Union. Clearly, LOFT believed that many Forward readers would be buying their loved ones chocolate on Valentine’s Day. Apparently, they also anticipated that some of these same readers would care whether the chocolate in question was kosher.

From The Forward Archives: A Very Yiddish Valentine’s Day