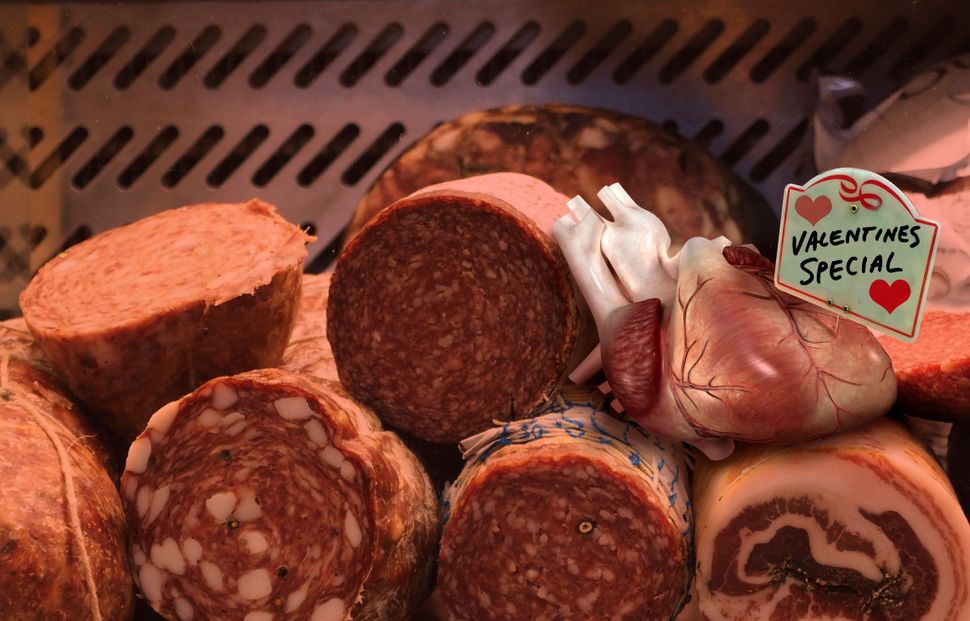 Let me start by saying that I am pro-love.

But V-day doesn’t feel like a day of love. It feels like a day of being repeatedly bludgeoned by a papier-mache statue of your smuggest happy-couple friends (ones who later viciously break up) while your most embarrassing life moments are playing to a full crowd on the Jumbotron at Yankee Stadium under the flashing headline “A Failure at Romance.”

Even if you are in a relationship, it’s threatened by the absurdly serious strictures and obligations of this peer-pressure pinkfest. So you book a restaurant table and turn on the radio to hear, “This misery is brought to you by mob rule, by Xanax, by Hallmark and by Viagra.”

It isn’t just the dictated consumerism of desire and shame that makes me hate this day. Valentine’s Day is a faux-Church imposition that should be immediately stricken from the national calendar — and stricken doubly from Jewish calendars.

St. Valentine himself seems nice enough. He’s reputed to have cured a blind girl and to have smashed a bunch of idols. But so little is known about him that even the Catholic Church took him off their general calendar in 1970. So, my Jewish, Muslim and atheist friends, not only is this a Christian holiday to which you are not bound, it’s a holiday that even the Christians have essentially disavowed.

(V-day hasn’t always been sweetness and light. Victorians marked Valentine’s Day with “vinegar letters.” And in 1929 Chicago, as you may know, the day was violently observed by a particular group of Irish and Italian Catholics. While obviously regrettable, their Saint Valentine’s Day Massacre seems like the most honest celebration of the festival to date.)

“Modern” Valentine’s Day began in the 14th and 15th centuries when that particular saint’s day was adopted for the celebration of love by some poets who championed the conventions of courtly love, most notably Geoffrey Chaucer. This was at a time when Jews were banned from England, and when the height of culture was to invent new ways to get poets into panties. Is there a connection between the expulsion of the Jews and Valentine’s Day? You tell me.

Coming about halfway between the winter solstice (shortest day) and vernal equinox (start of spring), February 14 marks a start to billing and cooing. But whatever the calendar says, it seems like cruel and unusual punishment to emerge from the “SAD” of seasonal affective disorder into that of Singleness Awareness Day.

Theodor Herzl celebrated St. Valentine’s Day 1896 by publishing “Der Judenstaat” in Vienna. Doesn’t that seem a little more significant than shaming your friends on the paltry state of their publicly declared romance?

But most sane people with a dash of perspective ignore conventions from the British Middle Ages and use Tuesdays in February to have hip replacements, watch “Modern Family,” or practice Philia — friendship for others. If you want to keep the “V” in “V-day” you can do as Nati and family do, and call it Validation Day. If you want to wait for the grape harvest for your opportunity to cavort and bear wood, be my guest. If you want to ditch the whole shebang, be my hero.