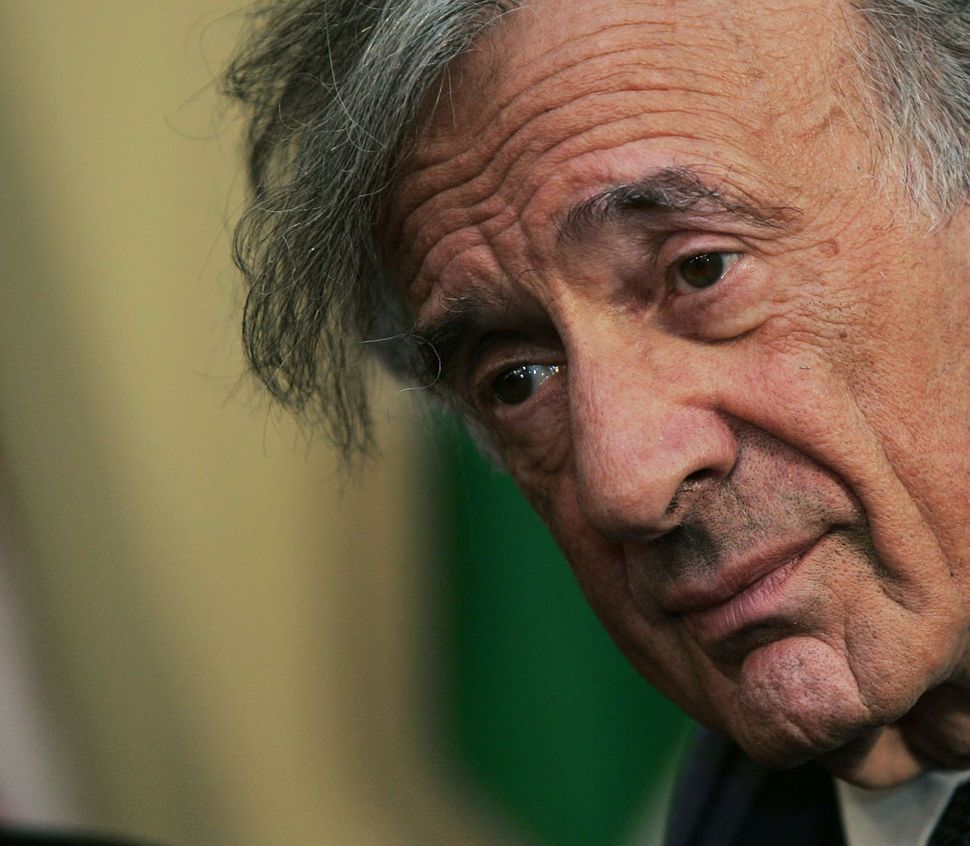 Elie Wiesel at the United Nations on October 27, 2004. Image by Chris Hondros/Getty Images

Elie Wiesel’s novel “Night,” the original Yiddish title of which translated to “And the World Remained Silent,” is the single best-known book about the Holocaust. It’s studied today in American schools, and for many readers it’s the only source they have on Holocaust history.

But in the 1960s, when Wiesel first became well-known in the United States, his audience consisted primarily of the children of Holocaust survivors, many of whose parents had told them nothing about what they experienced in Eastern Europe during World War II. For many of these children, Wiesel’s books paved a way to the experiences of their own parents during the Holocaust.

One of these children was the journalist Howard Reich. He came of age in the predominantly Jewish Chicago suburb of Skokie during the 1960s. His mother was 10 years old when the Nazis shot the Jews of her hometown Dubno in Volhynia, now in Ukraine, and she wandered for several years across Ukraine and Poland. His father was 17 when Germany invaded Poland. He survived the Holocaust in various labor camps. The couple met in Chicago and married in 1953.

Neither Reich’s father nor his mother ever told their son what they had been through. But from time to time they would act strangely. His mother would sit up nights at the window as if to protect her family from a danger that might befall them from outside. His father would wake up in the middle of the night and drink a glass of spirits in order to fall asleep again. By day his parents were respectable people, but they could become unpredictably enraged. As she aged, his mother would leave their home to wander the streets. Only years later was a psychiatrist able to provide a proper diagnosis: Post-Traumatic Stress Disorder.

Reich’s childhood in Skokie left a deep scar in his soul. He thought he never wanted to hear about the Nazi era again.

Reich grew up, and eventually became a music critic for The Chicago Tribune. In 2012 his editors asked him to conduct an interview with Elie Wiesel, and despite his reluctance to re-engage with the subject of the Holocaust, his conversations with the writer continued over four years. These conversations became the basis for Reich’s new book, “The Art of Inventing Hope,” in which Reich’s conversations with Wiesel are interwoven with memories of his childhood and his historical research about the Holocaust in Poland.

Wiesel told Reich about his own experience with his students in the 1970s in New York, among whom were a large proportion whose parents were Holocaust survivors. “I was a surrogate father for them,” Wiesel explained. “They wanted me to tell them what their parents never did.” Wiesel’s objective, Reich writes, was to help these young people overcome feelings of shame regarding their parents so that they could understand the tragic Holocaust experience, but also maintain hope for the future.

Reich and Wiesel’s conversations explored both the guilt of the children of Holocaust survivors once they comprehended how much their parents had suffered and their parents’s guilt for surviving when so many were murdered. Wiesel told Reich that he considered the children’s guilt a non-issue. “The coming generation should not feel guilty,” he said. “What have they done?” In order to free themselves of these undeserved feelings, Wiesel said, anyone feeling guilt over the Holocaust should take it upon themselves to give testimony about the Holocaust for all humanity. “To be a witness is actually a mitzvah,” he said. And the mitzvah can be performed in various ways: “There is no universal rule. Each family performs it in its own way.”

Reich and Wiesel also discussed Jewish identity. Wiesel believed that “witnessing” would help to preserve and strengthen a feeling of Jewishness among new generations. It’s important, he emphasized, that one remain faithful to one’s own self, and not feel any sense of inferiority because of the suffering that Jews experienced during the Holocaust.

Wiesel’s position, as it developed over the course of his conversations with Reich, was a kind of retort against the German-Jewish thinker Hannah Arendt. Arendt complained that Jews had passively aided the Nazis in conducting the Holocaust, and therefore these Jews, and particularly their leaders, bore a degree of responsibility for the Holocaust. Wiesel’s books and lectures allowed American Jews to consider the Holocaust both as a personal tragedy and a tragedy for humanity in general. Wiesel found a literary style and language that could speak directly to a broader readership as well as to a Jewish audience. This distinctive conversational style comes through clearly in Reich’s journalistic account of their conversations.