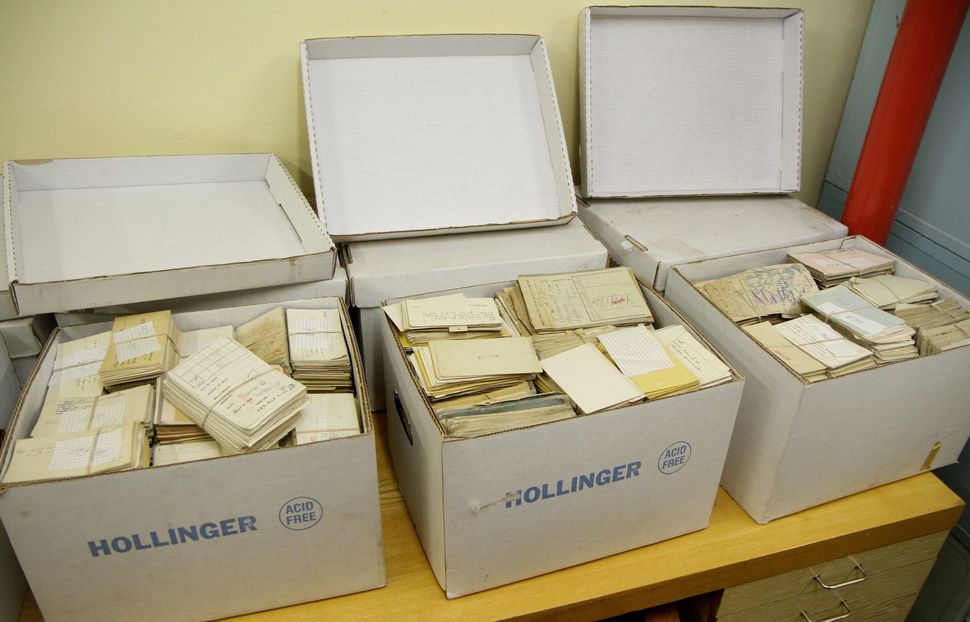 Archive documents of the YIVO Institute for Jewish Research get ready for digitizing in the Lithuanian Central State Archive in Vilnius on January 26, 2015. Image by PETRAS MALUKAS/AFP via Getty Images

The YIVO Institute for Jewish Research, the world’s preeminent center for the study of the Yiddish language, culture and history, has laid off all of its librarians.

Four people were let go in the move, which was announced internally last week and confirmed by executive director Jonathan Brent in a statement to the Forward on Monday afternoon, after this piece was originally published. The four librarians were among 39 total employees of the 95-year-old organization, which reported $5.1 million in spending in its 2018 annual report.

YIVO had a $550,000 revenue shortfall in 2019, Brent said, so the board and professional leadership decided to remove the librarians in order to “seek efficiencies in the organization to enable us to live within our means and regroup for sustained growth in the future.” He attributed the shortfall to a “drop in our levels of unrestricted giving.” YIVO’s 2018 annual report showed that less than 40% of its revenue came without donor restrictions.

YIVO’s library, which contains 400,000 books, newspapers and other publications, is separate from its archive, which contains 23 million items. Brent said that the library’s work will be conducted primarily by archivists “until such time as we can rebuild our library staff.” He said that the organization had made “every effort” to ensure researchers and visitors wouldn’t be affected by the change.

Zackary Baker, who worked as YIVO’s head librarian from 1987-1999, said that YIVO’s library was “absolutely crucial” to Yiddish scholarship. “It’s a tremendous repository of rare books,” he said. “Rare book collections need a curator to oversee them. That costs money.”

Online tools like the digitization of YIVO’s collection have made it easier for researchers to find materials unassisted, said Cecile Kuznitz, author of “YIVO and the Making of Modern Jewish Culture.” But, she said, not having dedicated librarians will still leave a lot of gaps — both in terms of growing the library collection and helping people find what they’re looking for.

“If someone comes in and says, ‘I’m interested in the history of the Yiddish press in Argentina – what’s out there? Has anyone ever written books about this?’ You need someone with some knowledge to answer a question like that,” she said. “There’s great staff at the center you can talk to, but they’re not specialists. They’re not going to have this level of knowledge that someone like Lyudmila Sholokhova had,” referring to YIVO’s library director.

Founded in 1925 and based in New York since 1940, YIVO has the largest collection of Yiddish-language books and newspapers in the world. Having a book in its library is considered a badge of honor for many Jewish scholars, Baker said. It’s unclear who will be in charge of updating the collection with new books and research papers.

YIVO and the Forward, the oldest Yiddish-language American news organization still in operation, have a decades-long institutional relationship. Forward president Samuel Norich previously worked as YIVO’s executive director, Forward board members Jake Morowitz and Edward Blank also sit on YIVO’s board, and the two not-for-profits share many of the same supporters.

“We are saddened to lay off four employees, but this temporary change allows YIVO to keep the library working while generating significant annual savings, until such time that we can raise more funds on a sustainable basis for the library,” he said.