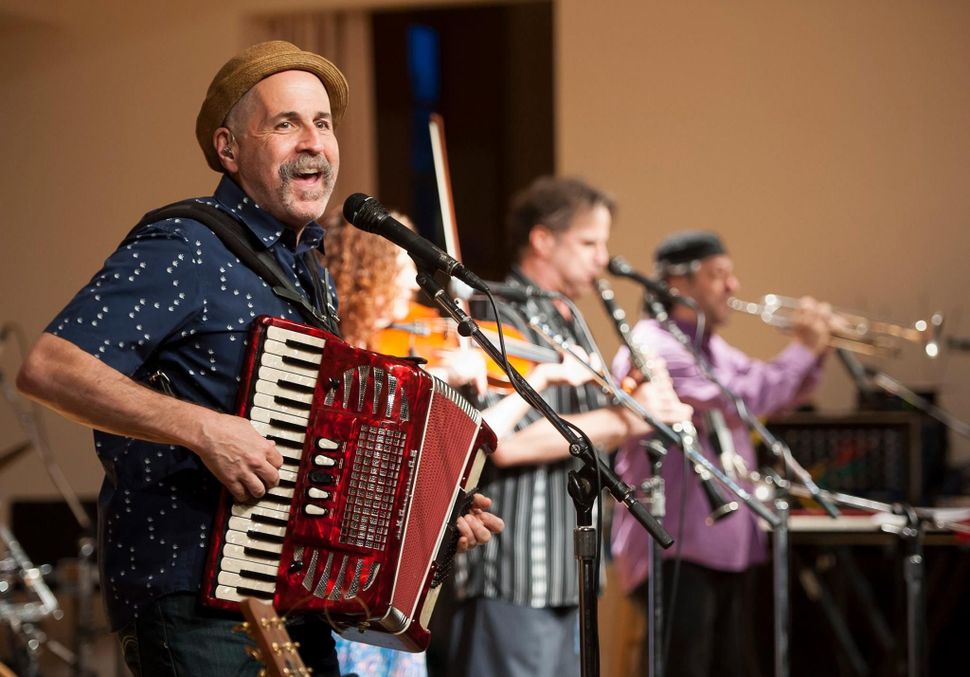 Each participant spoke about their perception of Yiddish music today and what makes it attractive to a diverse audience in the 21st century. While the participants agreed that Yiddish music seems particularly popular right now at a time when the coronavirus has forced the world indoors, they noted that the Klezmer and Yiddish music revival has been going on for more than 40 years and that people always turn to music to see them through difficult times. Lorin Sklamberg, lead singer of the Klezmatics and sound archivist at the YIVO Institute for Jewish Research, said that continuing to perform during the pandemic is a “matter of necessity” and that people are looking for community through their shared love of song.

Nearly all of the songs performed during the program were chosen to reflect recent political events, including the Black Lives Matter movement and/or the effects of the epidemic. Sklamberg kicked off the afternoon’s performances with his Yiddish take on Lluís Llach’s “L’estaca” (“The Stake”). Translated from Catalan into Yiddish by Dr. Yuri Vedenyapin, the song’s appeal to perseverance in the face of injustice retains its universal message in Sklamberg’s version while adding on a deeply Jewish resonance.

Sarah Gordon, who fronted the rock band “Yiddish Princess” and performs a wide repertoire ranging from folk songs and Hasidic tunes to more avant-garde material, noted that some people are surprised by the diversity of Yiddish song. “Anything that you like can be found in a Yiddish performance,” Gordon said. She reflected on how the coronavirus crisis and the renewed discussion of race in America have led many to reevaluate what is important in their lives. Continuing with the theme, she performed the song, “Vikhtik” (Important) by Efroim Vasserman, which highlights the things that are most important to traditional religious Jews, juxtaposed with those that are trivial. Alongside the original Yiddish words she performed Ira Temple’s radical English re-imagining of the song as a protest against racism and gender inequality.

Daniel Kahn, the translator of Leonard Cohen’s “Hallelujah” into Yiddish and lead singer of Daniel Kahn and the Painted Bird, spoke about how Yiddish music brings people together across generations, national borders and ways of life. He noted that while Yiddish music is a small culture on a global scale, those who work within it make up a close nit “khevre” (group, society) of friends, colleagues and collaborators. Introducing his musical selection by noting that “my interest in old things is their relevance to the present and the future,” Kahn performed a portion of Solomon Small’s 1916 song “Mentshnfreser” (man-eaters) about tuberculosis, polio and war.

Itzik Gottesman, folklorist and professor of Yiddish at the University of Texas at Austin, explained that the internet was a boon to Yiddish culture long before the coronavirus, noting that many people just discovered the vitality of Yiddish music once its treasures were posted online. He performed the Yiddish worker’s song, “Khavele iz fun der arbet gegangen” (Khavele was just going home from work), which describes a young worker being shot during a strike. While the song is often performed as a march, Gottesman’s late grandmother, the folksinger Lifshe Schaechter Widman, performed it in her repertoire a capella, the way Jewish women sang at the turn of the 20th century. Gottesman maintained this style in his performance, singing it very similarly to how his grandmother did decades ago.

Michael Alpert, a leading Yiddish folksinger and recipient of a National Heritage Fellowship from the National Endowment for the Arts, pushed back at the idea of an ongoing klezmer revival, noting that rather than just reviving old songs, performers are creating their own original material. He then performed one he wrote himself about the Yiddish music community, “Klaybt zikh tsunoyf” (gather together).

The program ended with Michael Alpert and Sarah Gordon speaking about the influence that the late singer Adrienne Cooper, Gordon’s mother, had on the world of Yiddish music. Sklamberg then performed “Shnirele Perele,” (Little String of Pearls), a song from the Hasidic community which Cooper introduced him to and which became a favorite in the secular world after the Klezmatics recorded it..